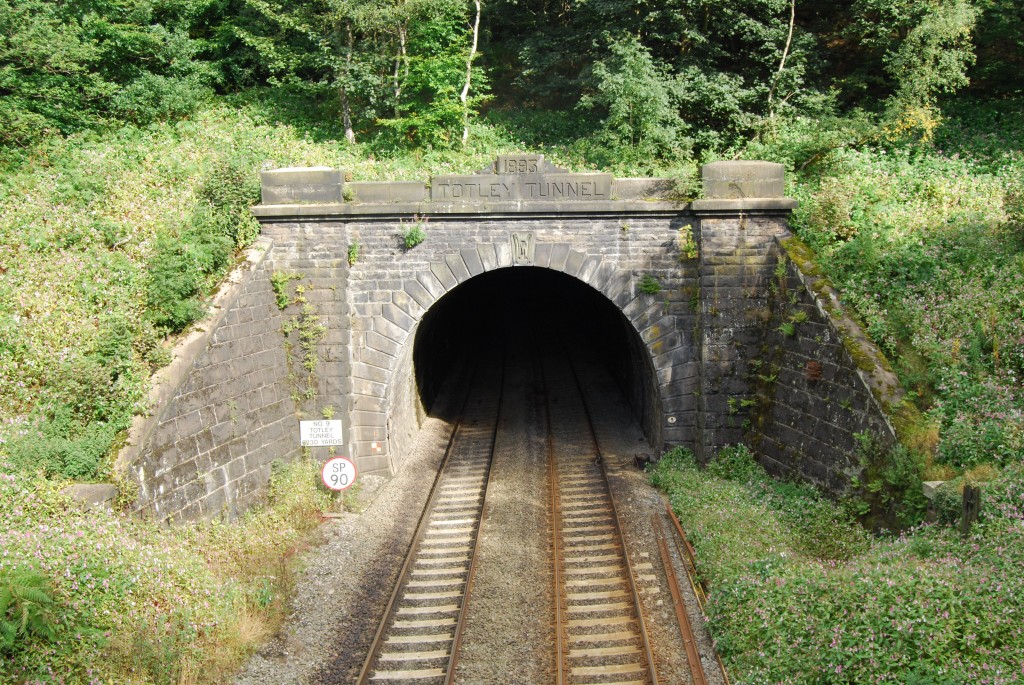 Even if they’re not the slightest bit interested in trains, few visitors to the Grindleford Station café can resist peering down from the station bridge at the western portal of Totley Tunnel and reading from the signs that it’s 6,230 yards long and was built in 1893.  It was in fact the second longest railway tunnel in the UK until the construction of High Speed 1.

Even if you go down to the station platform and walk to the end, it’s not possible to see light at the other end of the tunnel.

This is because not only is there a slight curve at the Grindleford end, but there’s also a summit in the middle.  In the days of steam and loose-coupled freight trains this presented a considerable challenge.  Running a heavy coal-train north from Derbyshire, up the Hope Valley towards Manchester with controllable brakes only on the locomotive and the rear brake-van required skill and nerve.

When I first taught adult-education classes in transport history in the 1970s they repeatedly attracted retired locomen who explained the practicalities of train-driving with old technology.

The risk bringing the train down the grade in Bradway Tunnel from Chesterfield was that the loose-coupled loaded coal wagons would simply push the locomotive faster.  At the north end of Bradway Tunnel is a tight curve, with another short tunnel, that cannot be taken at speed.

Once past the curve and through Dore & Totley West Junction, the approach to Totley Tunnel is a sudden steep uphill gradient, and the weight of the wagons dragged the locomotive as it charged forwards at gradients of 1 in 100, 1 in 176 and then 1 in 150 – significantly steep for steam power.

Inside the tunnel, you can’t see.  But there comes a point where the track levels and then dips downhill at 1 in 1,000.  You knew that was happening because the wagons would begin to bash together on their chain couplings pushing the loco as it headed towards the curve at the Grindleford end and, all too suddenly, the light at the end of the tunnel would appear.

This isn’t such a problem with modern traction, so I’m told.  A nudge of a control handle activates the brakes on every wheel of the train.  It’s all too easy to be nostalgic about the age of steam.

1 thought on “No light at the end of the tunnel”