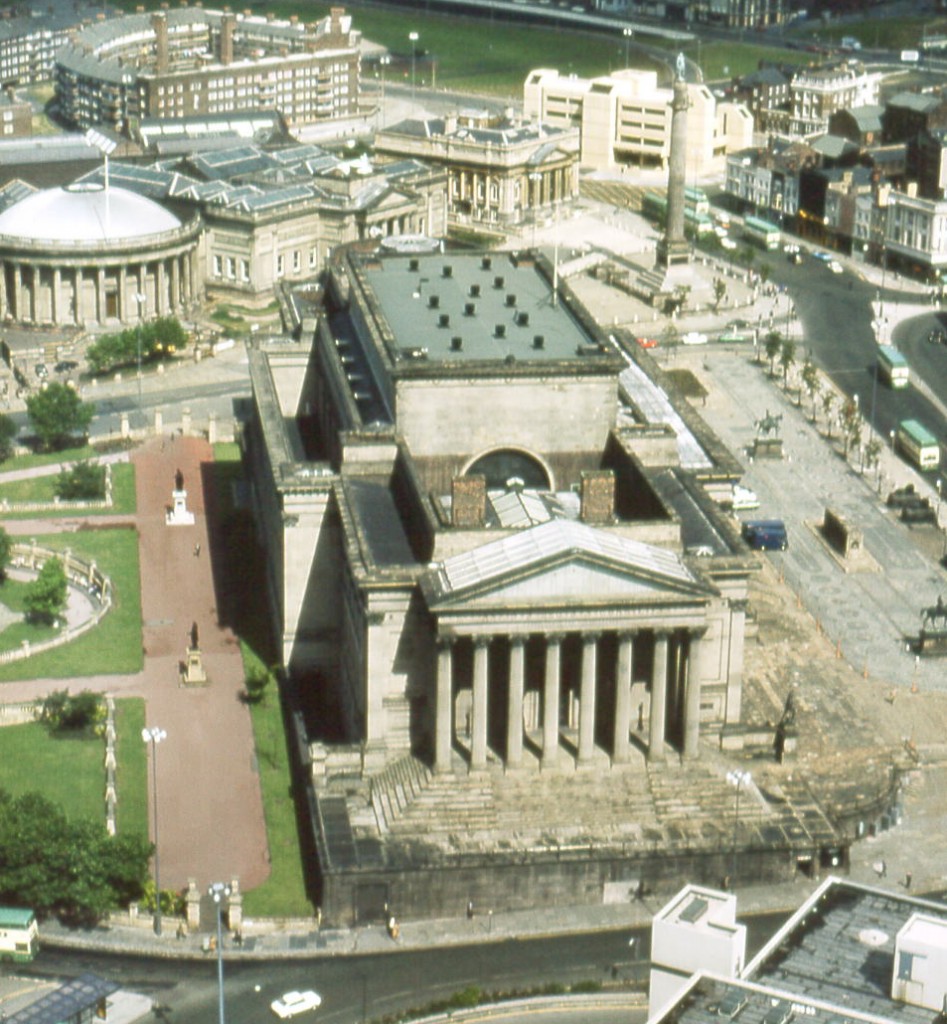 A couple of years ago I showed a group of gifted and talented Wirral school students nineteenth-, twentieth- and twenty-first century buildings in Liverpool city-centre as part of a NADFAS North-West Area Young Arts educational event.

I pointed out to these bright teenagers that some of Liverpool’s most remarkable buildings were designed by young architects no more than ten years older than them.

The following year Liverpool Corporation set up a second competition for the design of assize courts on an adjacent site, which Elmes duly entered anonymously and – extraordinarily – won.

He then revised his two designs, combining concert-hall and courts into one building.  The result was St George’s Hall, 490 feet long, with two law-courts at opposite ends of a large rectangular hall, and a circular smaller hall above the public entrance at the apsidal north end.

The Great Hall, 169 feet long and 74 feet wide, is based on the ancient Roman baths at Caracalla, which Elmes could only have known from publications.  Its sides are punctuated by red granite Corinthian columns with bronze-effect plaster capitals, supporting the 600-ton tunnel-vault, constructed to the design of the engineer Robert (later Sir Robert) Rawlinson.

The heating and ventilation system was designed by the same Dr Boswell Reid who drove Sir Charles Barry to distraction in the rebuilding of the Palace of Westminster:  manually operated by squads of workmen, it represented the first approach to air-conditioning of a major public building in Britain.

Elmes’ design, described by Sir Nikolaus Pevsner as “the best example of Neo-Classical architecture in Europe”, absorbed much of what remained of his short life.  His health, never strong, gave way when the Hall was partially completed.  He left to winter in Jamaica in 1847 and died there aged 34, leaving the completion of the design with Rawlinson, who finished the Great Hall vault in 1849.

In 1851 the Corporation appointed Charles Robert Cockerell to supervise the decoration of the Great Hall and its superb encaustic-tile floor – still to this day in mint condition – by Minton, Hollins & Co.  He also designed the circular Concert Room with its balcony supported by graceful caryatids of hollow plaster.  This magical early-Victorian interior uses the most modern materials of its time – cast iron for the balcony trelliswork, papier mâché for the frieze and pilasters that surround the detached grained deal panelling, plate glass mirrors behind the elaborate Corinthian columns at the back of the stage and a gas-lit cut-glass chandelier, recently restored, by F & C Osler of Birmingham.

Elmes specifically asked that “there will be no organ at the end of the Hall, so that you can stand on the Judge’s Platform in one court, your eye glancing along the ranges of ruddy columns at either side,…[until it] finally rests upon the further Judge’s Throne.”  Instead, in the fashion of the day, Cockerell designed a gigantic case for the vast ‘Father’ Willis organ, which was completed in 1855, the year after the Hall opened.

St George’s Hall is a gem of world architecture – by an architect who if he was alive today would be recently out of college.