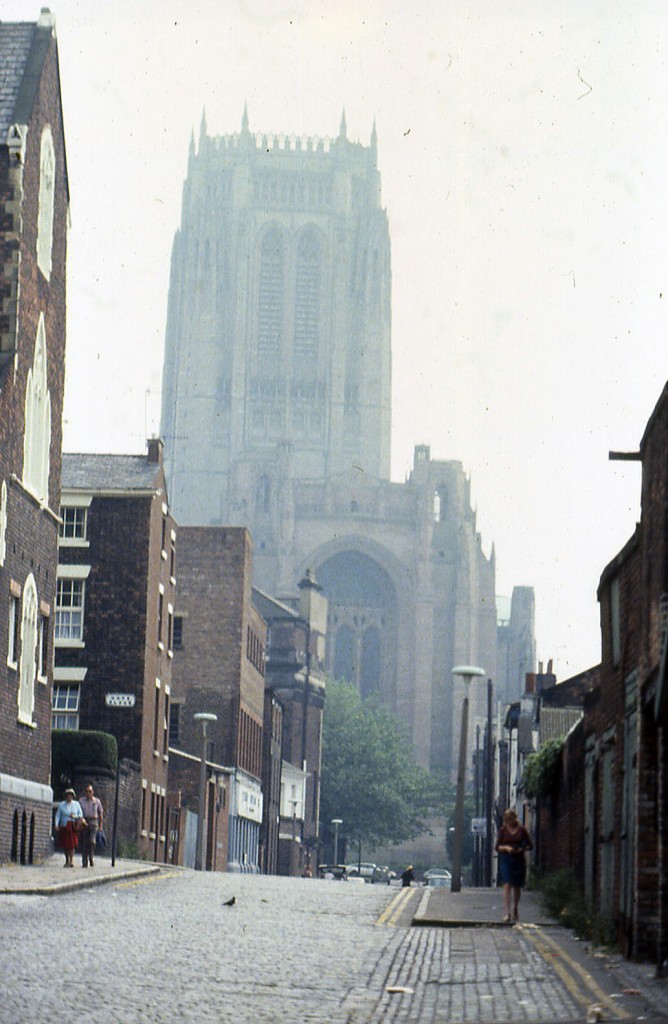 The achievement of Harvey Lonsdale Elmes, winning two competitions to design what became St George’s Hall, Liverpool, between the ages of 25 and 27, is remarkable;  even more surprising was the result of the competition to build Liverpool Cathedral fifty years later.

1880s plans to build an Anglican cathedral on the St John’s site, backing on to St George’s Hall, came to nothing:  no-one could find a way of building a church that would sit comfortably alongside Elmes & Cockerill’s great classical temple.

The eventual site, St James’ Mount, was chosen and the customary architectural competition organised, with a controversial stipulation that Gothic designs would be preferred.

When the 103 anonymous entries were assessed, the judges were disconcerted to discover that the winner was the 21-year-old Giles Gilbert Scott, grandson of the great Gothic Revival architect, George Gilbert Scott, who had designed, amid much else, the Midland Grand Hotel at St Pancras Station.  To add to their discomfort, Giles Scott was a Roman Catholic.

The committee asked him if he’d designed anything before.  Yes, he said, a pipe-rack for his sister.  In the end, Scott was given the commission, as was his right, but under the supervision of one of the assessors, the veteran Gothic Revival architect, George Frederick Bodley.

Bodley’s influence is apparent in the florid decoration of the first section of Scott’s cathedral, the Lady Chapel, begun in 1904.  It was an uncomfortable arrangement:  Giles Scott’s resignation was ready to post when he heard the news of Bodley’s death in 1907.

By the time the Lady Chapel was consecrated in 1910, Scott went to the building committee and calmly proposed a radical redesign.  Instead of twin towers, he wanted a single tower above a majestic central space.  This was not straightforward, for the foundations of the two towers were already in place, which is why the cathedral as built has twin transepts and twin central porches, one of which stares vacantly over the chasm of St James’ Cemetery.

The 331-foot Vestey Tower, named after the Dewhurst butchers’ dynasty that paid for it, contains the highest and heaviest ringing peal of bells in the world.  The central space below could accommodate Nelson’s Column if Nelson took his hat off.  The tower was completed in 1941, in the darkest days of the Second World War.  “Keep going, whatever you do, even if you can only go on in a small way,” King George VI advised on a wartime visit.

Sir Giles Gilbert Scott died in 1960, his final contribution the Nave Bridge which frames the vista towards the High Altar.  The west end was eventually finished, to modified designs by his professional partner, Frederick Thomas in collaboration with Roger Pinckney, and dedicated in the presence of HM Queen Elizabeth II in 1978.

Sir Giles and Lady Scott’s remains lie before the west door of the completed cathedral.  The Winter 2010-11 edition of C20 – the magazine of the Twentieth Century Society mentioned that the stone marker of [their] grave has been removed and that they rest “in an unmarked grave as cars and delivery vans to the café and shop frequently drive over [them]”.

That may be true, but it can’t be right.

1 thought on “Younger architect in Liverpool”