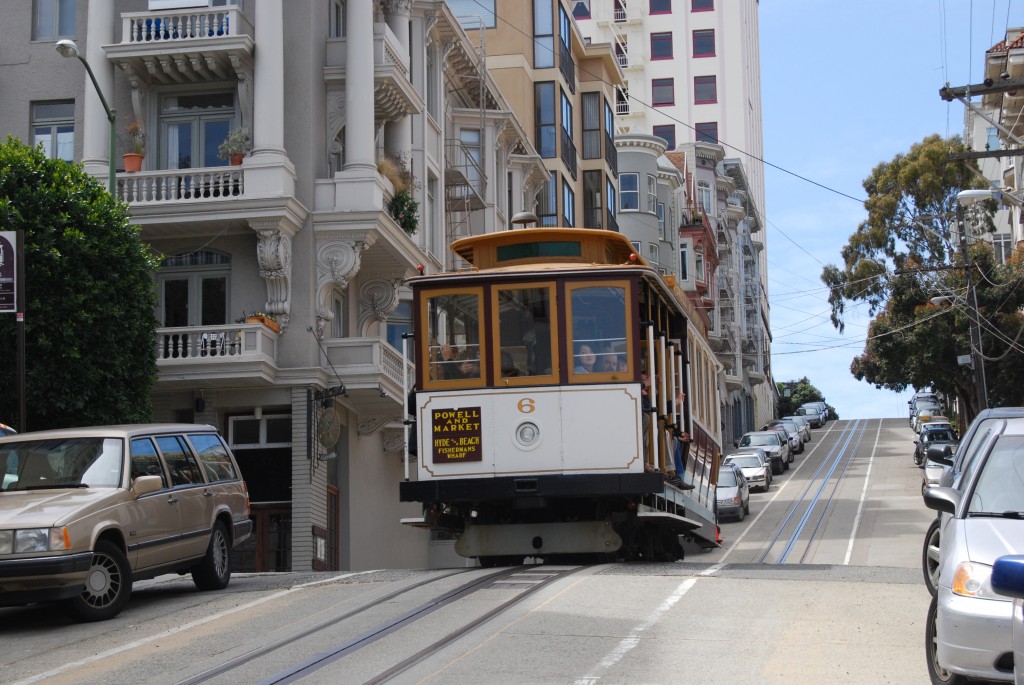 San Francisco is the city where “cable cars climb halfway to the stars”, and if you stand in the right place at night, they really do.

That the cable cars are indelibly linked with the visitor’s image of San Francisco is the cause of, but not the reason for, their survival.

The very first cable-hauled streetcars in the world, they were developed by a wire-rope manufacturer, Andrew Smith Hallidie (1836-1900), as an alternative to the inefficient and cruel horse-drawn streetcars that simply couldn’t cope with the city’s precipitous inclines.  His first line, on Clay Street, opened in 1873.  On the first run, the original gripman, a steam-locomotive driver (or – in American English – engineer) called Hewitt, lost his nerve at the brow of the hill, and resigned on the spot:  the first car was driven by Hallidie himself.

By 1894, 103 miles of cable-car track were in operation with a combined fleet of about five hundred cars.  In the recovery from the 1906 earthquake and subsequent fire, several cable-car lines were converted to electric operation.  Even so, electric streetcars were unequal to the 10% grades that cable-cars took in their slow but inexorable stride.  Only rubber-tyred trolleybuses eventually stood a chance of competing.

After the Second World War city politicians, supported by a powerful lobby of oil, rubber and motor-vehicle interests, aimed to close down the five surviving lines, but were ultimately defeated by the sheer weight of public-opinion.  In 1956 three remaining routes, comprising nine track-miles, gained legal protection by popular demand.  The system was designated a National Landmark in November 1964, and when it finally wore out was completely rebuilt in 1982-4.

To a modern eye the cars look absurd, but when you climb aboard they immediately make sense.  Because they attach to an underground cable running at a constant speed of 9½ miles per hour, they tackle the steepest inclines with as much equanimity as dead level, and crawl downgrade as steadily.

Riding the cable cars is an experience for the early morning:  after about 9.30am the crush is such that all you see sitting inside is buttocks.  Outside your view is often blocked by passengers standing on the running board.

There is a practical alternative to being crushed on a cable car.  San Francisco is festooned with trolleybus routes, operated by surprisingly noisy single-deck vehicles, some of them articulated.  They’re spacious, speedy, and effective as urban transport.  I learned years ago, when I bought a plastic salad spinner to dry lettuce, that the moaning sound I remember Sheffield trams making when I was a kid, which is also distinctive of the London Underground, is not in fact the electric motors but the gears.

The single-deck San Francisco trolleybuses, with their long trolley booms, also make a distinctive slapping noise overhead as they progress through junctions.  They’re nowhere near as noisy as the cable cars, though.  And totally clean, unlike their diesel cousins.

1 thought on “Halfway to the stars”