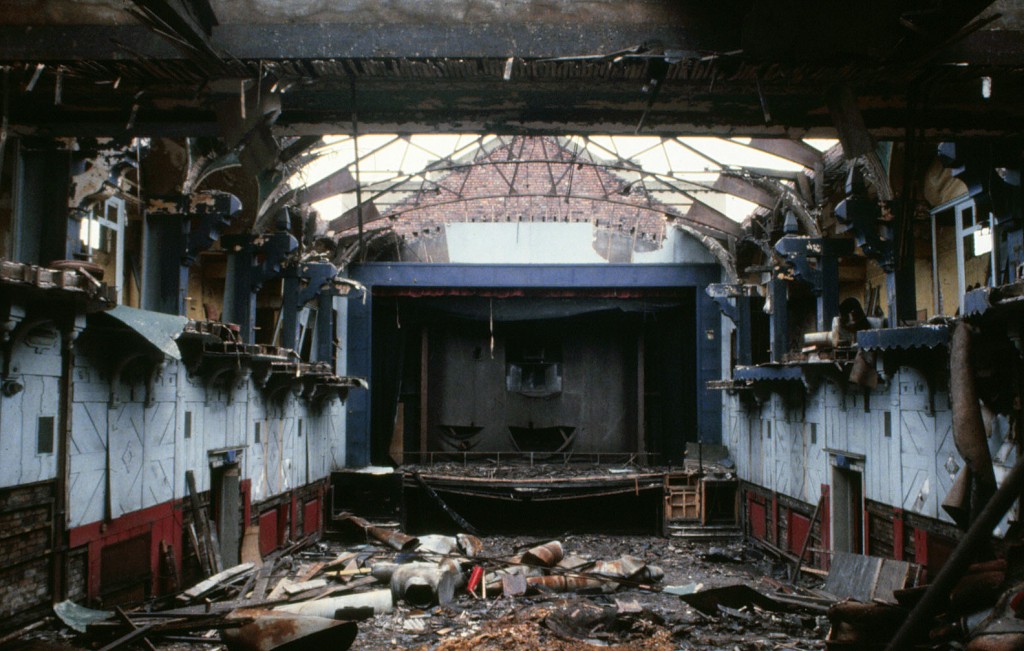 Another building that the Victorian Society South Yorkshire group couldn’t visit during their Attercliffe walk in 2010 was the Pavilion Cinema, opened in 1915 and eventually demolished in 1982.

Though the original plans show that a classical interior was intended, in fact the auditorium was mock-Tudor, with black-and-white timbering, strapwork and lanterns as house-lights.  The auditorium was distinguished by side boxes, as in a theatre, very popular with couples:  the cinema management had an interesting strategy of pricing these box seats at 3/- for five people.

The Pavilion was converted to bingo briefly in 1970 and then became an Asian cinema:  at some point the owners repainted the entire auditorium in raspberry pink and two shades of blue.

When demolition began, in the innocent days before security fencing, I explored and photographed the entire building, primarily because it was one of the two Attercliffe cinemas that my parents patronised regularly on Saturday nights.  (My dad, who wasn’t nicknamed “Scottie” for nothing, declared around 1954 that we wouldn’t buy a television because they’d soon be making colour ones.)

I alerted the Victorian Society to the imminent demise of this unusual building, to be told that no-one had any idea how unusual it was, because no survey of Sheffield cinemas had been attempted.

So I tramped around the city checking out the survivors and was briefly the greatest living expert on the subject until Richard Ward produced his book In Memory of Sheffield Cinemas (Sheffield City Libraries 1988).  (I happen to know that Richard wanted the book to be titled A Memory… but made the common error of dictating his intention over the phone.)

I’ll always have a soft spot for the Pavilion, not so much because it was part of my childhood as because it kick-started my interest in the architecture of the entertainment industry, and led me to run continuing-education courses and study tours about pubs, theatres, cinemas and the seaside under the umbrella title ‘Fun Palaces’.

And that has proved to be one of the most enjoyable aspects of all my history work.