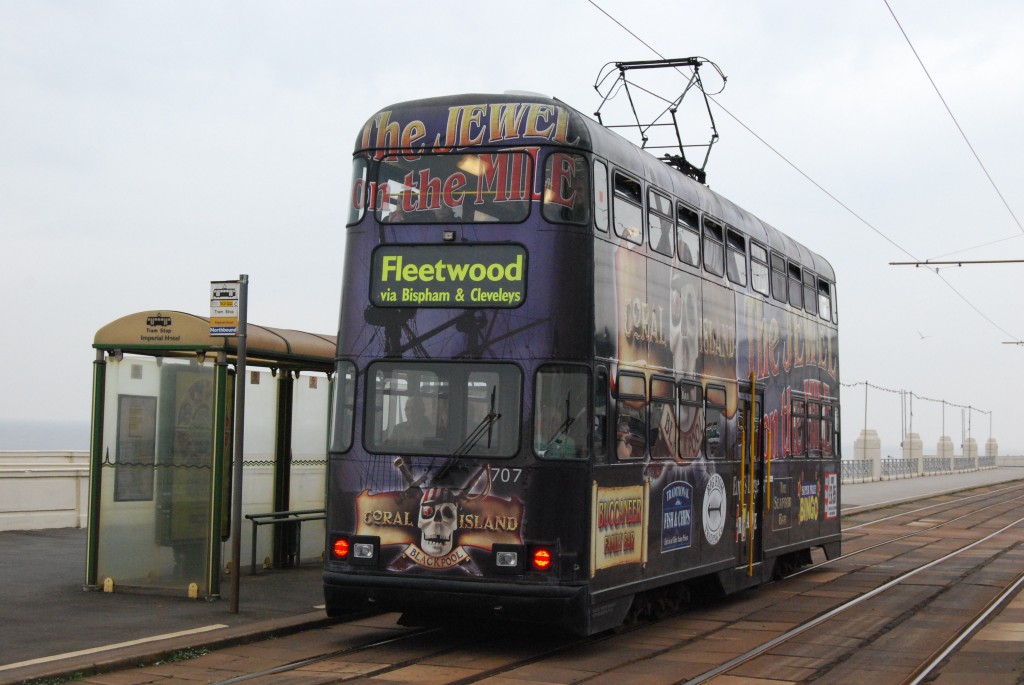 I had occasion to drive the length of the Flyde coast from Fleetwood to Lytham in the summer of 2011, and discovered – as any tram enthusiast could have told me – that major changes were afoot on the Blackpool tramway.

The line from Fleetwood to Little Bispham was in a state of upheaval, and there were no trams south of Pleasure Beach.  The entire line from Starr Gate to Fleetwood was upgraded to a modern light-rail system, with sixteen brand-new low-floor vehicles, built by that great British rolling-stock builder Bombardier, operating out of a brand new depot.  [See http://www.lancashire.gov.uk/corporate/web/?siteid=5149&pageid=26959 and http://www.bbc.co.uk/news/uk-england-lancashire-12151400]

That means that the summer of 2011, until the end of the Illuminations on November 6th, was the very last time a public-service tramway will operate in Britain with technology that is essentially Victorian.

Blackpool’s proud history of electric trams back to 1885 encompasses a traditional first-generation tram system which was comprehensively upgraded from 1932 when the transport manager, Walter Luff, introduced a fleet of streamlined luxury vehicles, in four different models, alongside a parallel fleet of streamlined centre-entrance buses.

When all other mainland British electric tramways were replaced by diesel buses after the Second World War, Blackpool still needed the promenade trams because there was no other practicable way of shifting the crowds that visit Blackpool for the Illuminations.

Over decades the system has struggled on, rebuilding 1930s trams in various guises, buying in one-off designs from the local bus manufacturer and patching the track and overhead time and time again.

Eventually, in 2008, a package was agreed between local, national and European authorities to convert the tramway to the standards now familiar in Manchester, Sheffield, Croydon, Nottingham and elsewhere.

In Blackpool the heritage fleet, as it is now called, continues – discreetly modified to comply with the new traffic signalling, operating out of the original depot at Rigby Road.

But when the older cars are trundled out it’s for show.

This was the very last time, after a century and a quarter, that ordinary passengers clambered aboard traditional British tramcars to go to work, to shop or to get home.

In the 1880s the borough first introduced electric trams and electric street lighting:  then and now Blackpool’s civic motto is “Progess”.