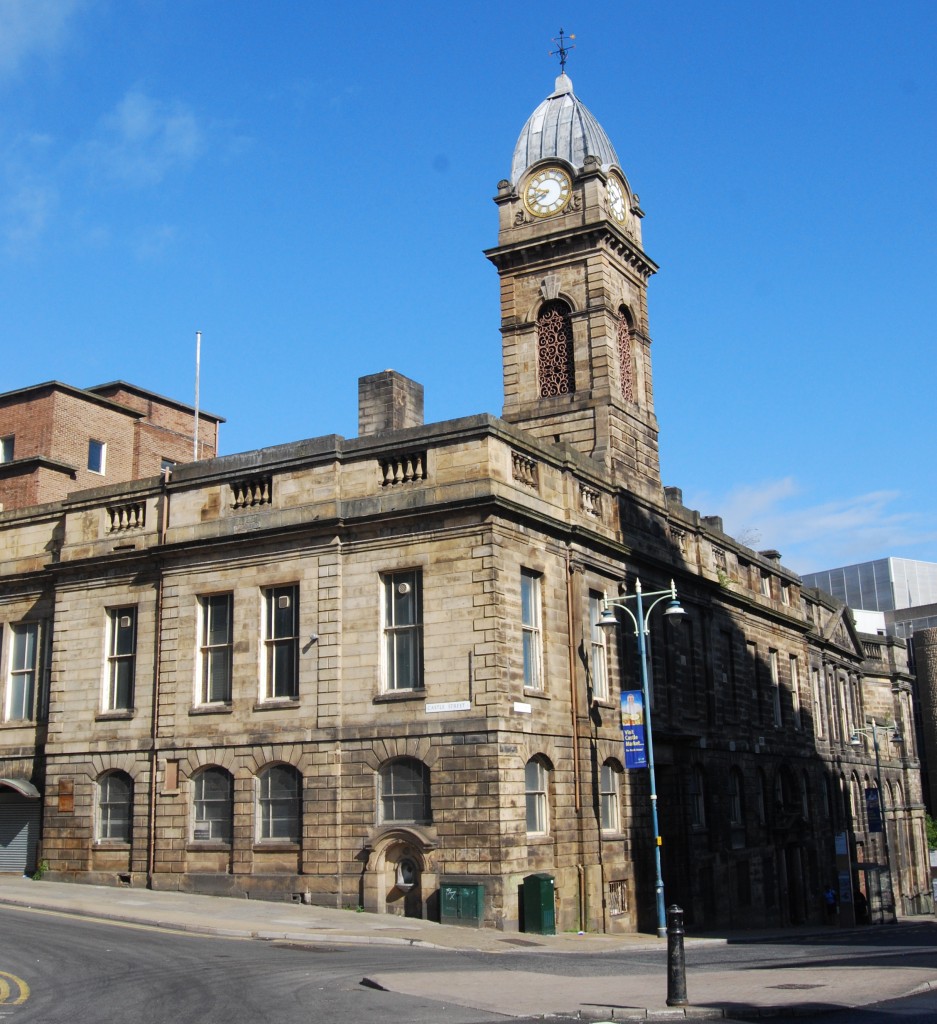 George Eliot remarked, in Middlemarch (chapter 20), that “…the quickest of us walk about well wadded in stupidity”.  It’s astonishing how much we miss while going about our daily business.

When Valerie Bayliss led an intriguing Victorian Society South Yorkshire Group walk around just three streets in the centre of Sheffield earlier this summer, she ended at the Old Town Hall on the corner of Castle Street and Waingate.

This huge building, dating back to 1807-8, was repeatedly extended through the nineteenth century.  After the E W Mountford “new” Town Hall opened in 1897, it became law courts, with a tunnel connection to the Police Offices across the road in Castle Green.  The Old Town Hall, as it’s long been known, ceased to be used as law courts in 1997 and has been practically abandoned ever since.

I – and thousands of other Sheffielders – go past it daily without giving it a second glance.  It has no street presence.  Even the tower clock doesn’t work.

A 2001 plan to turn it into a nightclub and offices came to nothing, and it seems as if the owner has simply walked away from it.

Valerie and her group have kept an eye on it and campaigned to arrest its decay for years now [see http://www.bbc.co.uk/southyorkshire/content/articles/2008/10/20/old_town_hall_feature.shtml].

It featured in the Victorian Society’s national list of endangered buildings in 2007:  http://www.yorkshirepost.co.uk/news/around-yorkshire/local-stories/save_neglected_old_town_hall_1_2474325.

Now is not a good time to pump money into a dying building.  Yet it’s barely credible that such a huge and important public building has no use, and has had no maintenance for fourteen years.

Future meetings of the Victorian Society South Yorkshire group are advertised at http://www.victoriansociety.org.uk/south-yorkshire/forthcoming-events.  Guests are welcome.  The biscuits are excellent.