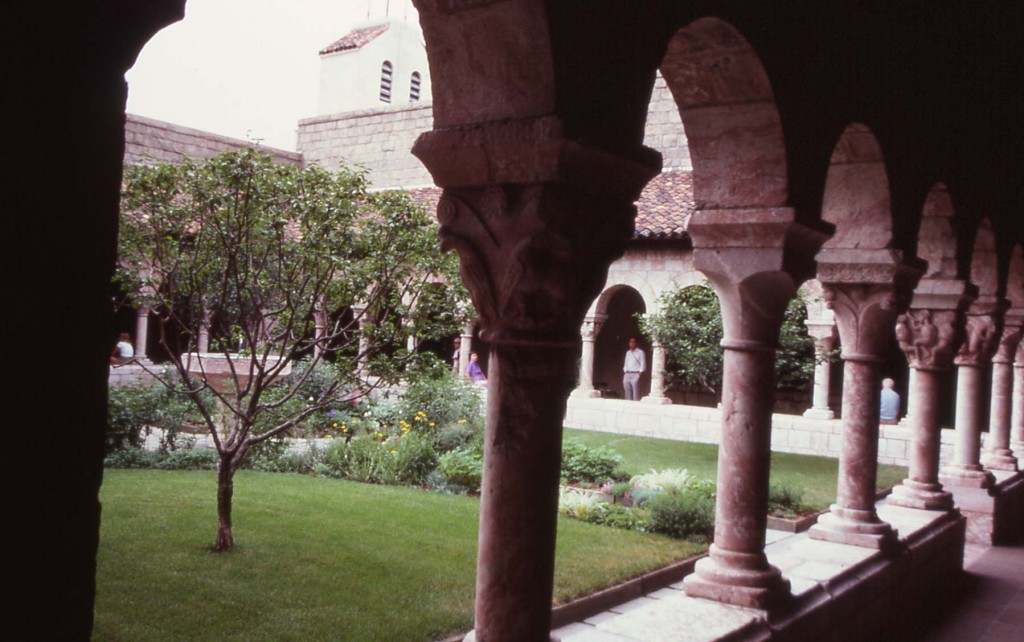 Catch a Madison Avenue bus from lower Manhattan uptown.  As you pass through midtown, fashionable ladies with designer handbags and designer dogs trip on and off.  When you reach Harlem, more substantial ladies get on with bags of shopping.  Eventually, you reach a turning-circle, and the driver expects you to leave the vehicle.

You walk through an archway to a turnstile, and after the customary museum formalities you’re in The Cloisters, an American version of the Middle Ages – complete with Gregorian chant on the PA system.

At a time when European scholars lagged far behind their American counterparts in appreciating the value and significance of early medieval art, John D Rockefeller Jnr (1874-1960) and the sculptor George Grey Barnard (1863-1938) took the opportunity to dismantle and transport across the Atlantic a wealth of artefacts and works of art, including four complete cloisters which are reconstructed in Fort Tryon Park near the northern tip of Manhattan.

Somehow, this strange collection casts a spell over its visitors.  Put together in 1938 with a reproduction tower based on a twelfth-century French original, it is a most beguiling place.

As well as the four cloisters, the exhibits include the complete apse of the chapel of San Martin de Fuentiduevña from Segovia, the chapter house of the abbey at Pontaut in Gascony and a wealth of tapestries, manuscripts, reliquaries and glass.

The Cloisters is administered as a branch of the Metropolitan Museum of Art.  See http://www.metmuseum.org/cloisters.