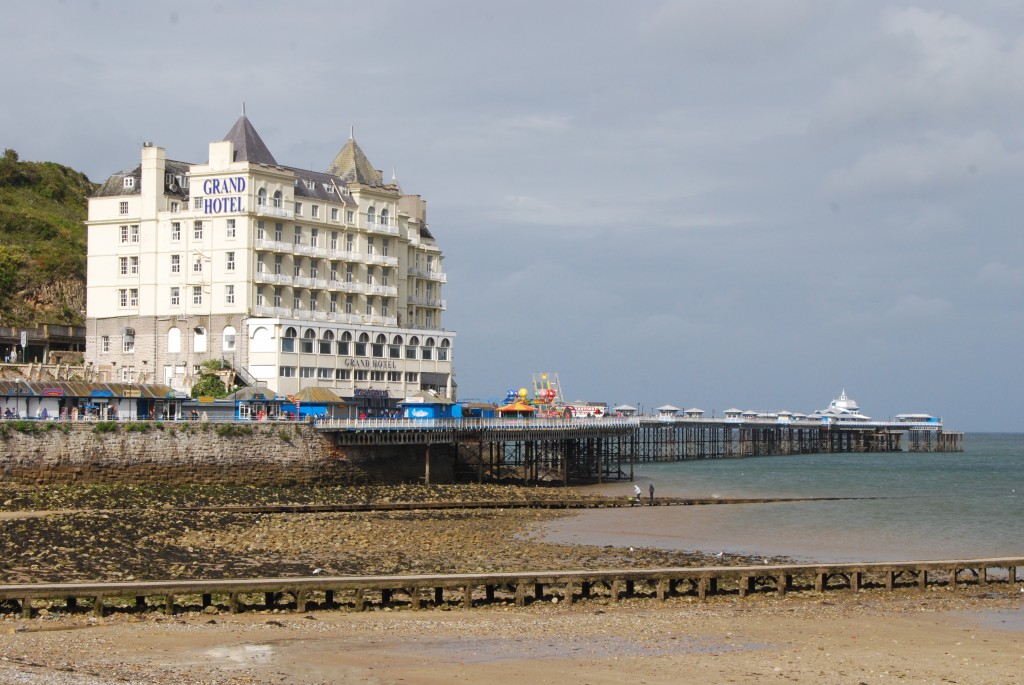 Llandudno Pier is one of the finest unspoilt British piers, and it’s always been my favourite because it’s the one I remember, as a child, still in use for its original purposes.

Seaside piers were, after all, primarily landing stages, which quickly gained an entertainment function because they offered landlubber holidaymakers the experience of being out at sea without the inconvenience of sea-sickness.

The main section of the Llandudno Pier by the engineer James Brunlees, 1,200 feet long, opened on August 1st 1877.  The Baths, Reading Room and Billiard Hall alongside were reopened as the Baths Hotel in 1879, and a spur was added linking the Pier to the promenade in 1884.  Alongside this the Pier Pavilion, a huge glass structure 204 feet long and between 84 and 104 feet wide, was opened in September 1886.  Its basement contained a swimming pool 160 feet by 48 feet, then one of the largest in existence.

The Baths Hotel was replaced in 1900 by the existing Grand Hotel, designed by James Francis Doyle.  The Pier Pavilion, having stood derelict in the ownership of a developer who famously didn’t develop, was destroyed by fire on February 13th 1994:  [See http://llandudnoandcolwynbay.blogspot.com/2009/07/pier-pavilion-llandudno.html and http://llandudnoandcolwynbay.blogspot.com/2009/08/exploration.html].

When we stayed in Llandudno in the 1950s one of the highlights was a paddle-steamer trip from Llandudno Pier to Menai Bridge and back on one or other of the Liverpool & North Wales Steamship Company steamships, St Tudno or St Seiriol [http://www.simplonpc.co.uk/LNWSS3.html].

The trip, which we did on more than one occasion, included chugging round the enigmatically inaccessible Puffin Island, with its mysterious hill top tower, and gazing from Telford’s suspension bridge at the beached wreck of HMS Conway.

Puffin Island [Ynys Seiriol] was part of the Bulkeley family’s Baron Hill estate, of which the derelict Palladian house by Samuel Wyatt is illustrated at http://www.welshruins.co.uk/photo2076816.html and http://www.urbexforums.co.uk/showthread.php/10992-Baron-Hill-Mansion-Beaumaris-Jan-2011.

The tower forms part of the remains of one of the stations on the semaphore telegraph system that brought news of incoming ships from Holyhead to Liverpool [see Frank Large’s detailed study, Faster Than the Wind: A History of and a Guide to the Liverpool to Holyhead Telegraph (Avid 1998)].  More details of the island, and the opportunity to take a close look at it, are at http://www.photographers-resource.co.uk/locations/Routes/Islands/LG/Anglesey/Puffin_Island.htm.

What we knew as HMS Conway was originally HMS Nile, launched in 1839 and used as a Liverpool-based training vessel until, while being towed through the Menai Strait in 1953, she grounded and broke her back.  She was eventually destroyed by fire three years later.  A detailed account is at http://www.hmsconway.org/RootFolder/Assets/Home_Page.htm.

The Isle of Man Steam Packet Company maintained a tenuous steamer service to and from Llandudno Pier, and the celebrated PS Waverley and MV Balmoral made occasional visits until the landing stage was declared unsafe in 2007.

Nevertheless, the Pier itself appears to be in good order, and it’s an essential part of the Llandudno experience to stroll to the end of the pier, watch the fishermen and have either a cup of tea or an alcoholic drink in the bar, very much as the Victorian patrons would have done 130 years ago.

Blog-articles about other piers are at Lost resort in Yorkshire, Stars on the street, End of the pier show, Exploring Australia 10:  St Kilda and Wasting asset.