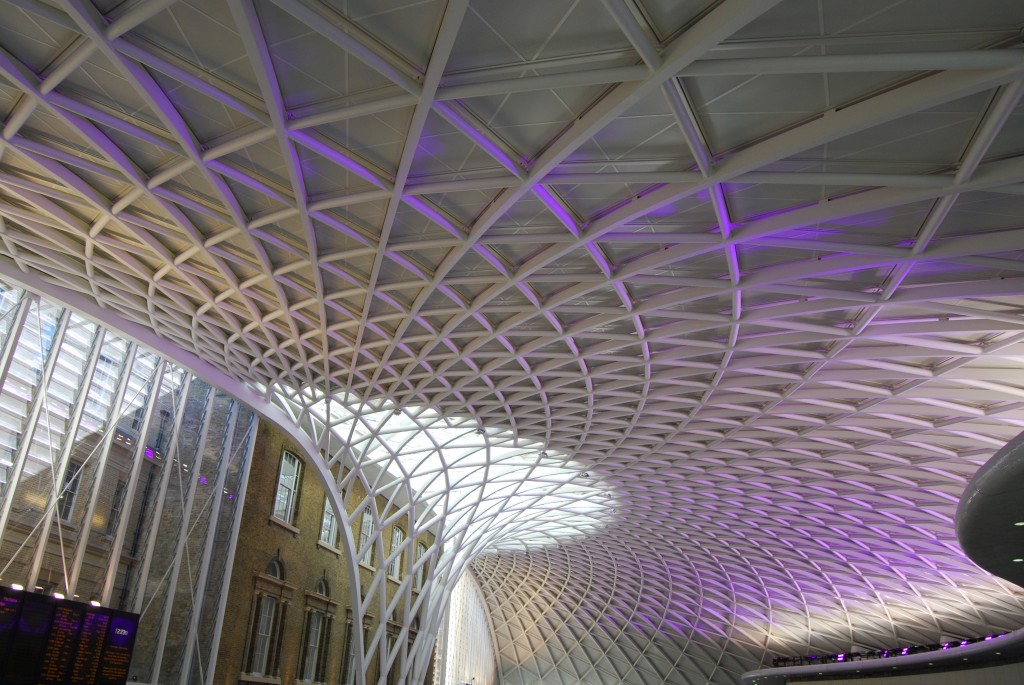 At last the new concourse for London’s King’s Cross Station has opened, elegantly spanning the space between the west wall of Cubitt’s trainshed and the gentle curve of the Great Northern Hotel.

It’s a spectacular uninterrupted space, spanned by John McAslan’s semi-circular geometrically interesting roof, easy to navigate if you’re in a hurry, with space to sit and wait above the throng.

The considerable challenge of linking and respecting the contrasting architecture of the two Victorian stations, King’s Cross and St Pancras, is met in an unequivocally twenty-first-century manner.

It used to be so different.  Not that many years ago, nobody hung around King’s Cross unless they were deeply naïve or even more deeply dodgy.

It could have been so very different, if the best-laid plans of local authorities and commercial developers had ever been fulfilled.

Henry Porter, in an article in The Observer (March 25th 2012) [http://www.guardian.co.uk/commentisfree/2012/mar/25/henry-porter-kings-cross-new-concourse?INTCMP=SRCH], describes how a succession of financially-driven schemes came to grief in a succession of economic downturns, and how the persistence of local activists, led by the King’s Cross Railway Lands Group [http://www.kxrlg.org.uk], led the way towards a community-based solution.

His main message is that “the wisdom of citizens should routinely count for much more than it does in British planning, because it is always local people who understand the aspirations of their community and the way their particular public spaces work”.

The King’s Cross Railway Lands Group is monitoring what looks like a signal success:  the block across the Euston Road from King’s Cross Station is the subject of an incompletely thought-out proposal, and the Group continues to challenge the designs to replace the 1970s frontispiece of Cubitt’s station after the Olympics.

There is no final victory in the campaign to protect the environment, but there are successes.

And this is a moment to be grateful that groups such as the King’s Cross Railway Lands Group plug away for decades at a time, even when the chances of success look most slender.