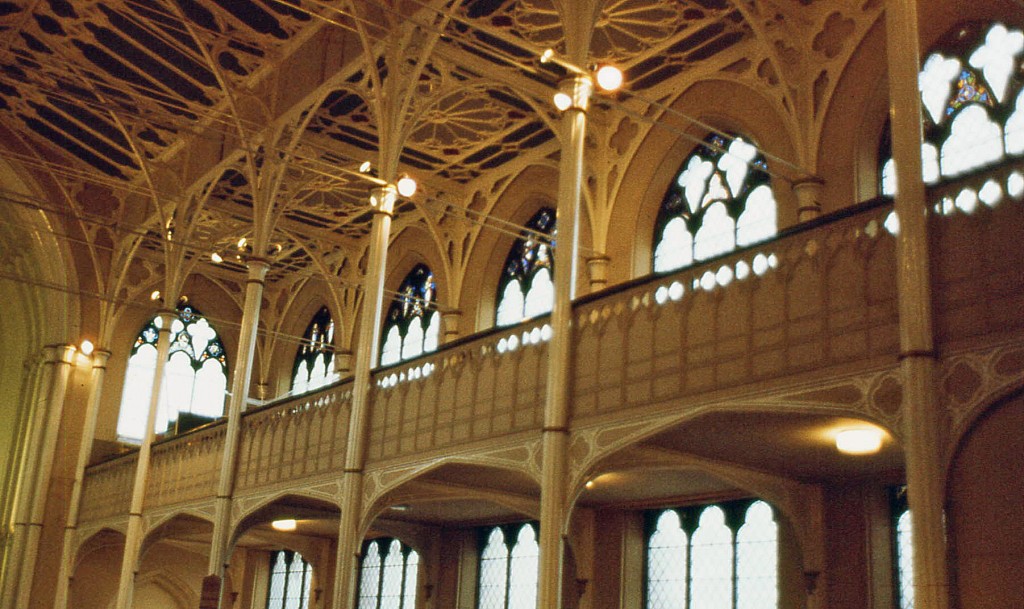 The idea of prefabricating architectural bits and pieces for export to the colonies predates the Victorian period.

There was a remarkable collaboration between Thomas Rickman (1776-1841), who became Professor of Architecture at the Liverpool Academy, and John Cragg (1767-1854), the owner of the Mersey Iron Foundry, who was described by a contemporary as “a remarkable man to whom I cannot find a single gracious allusion on anybody’s part”.

Rickman is the archaeological scholar who worked out the chronology of medieval churches, and gave us the expressions ‘Norman’, ‘Early English’ and ‘Decorated’:  [See ‘Buried Lives’ in Barton-on-Humber].

The pair collaborated on three pilot projects in Liverpool:  one, St Philip, Hardman Street, has long gone;  the other two survive as distinctive monuments to nineteenth-century innovation.

At St George’s Church, Everton (1812-14), though the external walls and the tower are stone, the whole of the interior structure – columns, roof-beams, braces and panels – and the window-tracery are of delicate, finely-detailed castings.

The same moulds were also used in Cragg’s own neighbourhood when they built St Michael-in-the-Hamlet, Toxteth (1814-15), where the walls are brick (at one time stuccoed), and all the external architectural detail, such as pinnacles and copings, is also of iron.

Thomas Rickman felt confident that churches could be constructed on these lines for no more than £6,000 each.  In fact, when John Cragg built St Michael-in-the-Hamlet at his own expense, the total outlay using the moulds from St George’s came to £7,865.

Though cast-iron tracery and other ecclesiastical decoration is not uncommon in early-nineteenth century churches and other Gothic Revival buildings, I’ve never come across any reference to recognisable examples of Rickman’s designs for the Mersey Iron Foundry turning up anywhere outside England.

Perhaps somewhere, in a distant land, there’s a church or chapel built from the same kit as the two Liverpool churches.