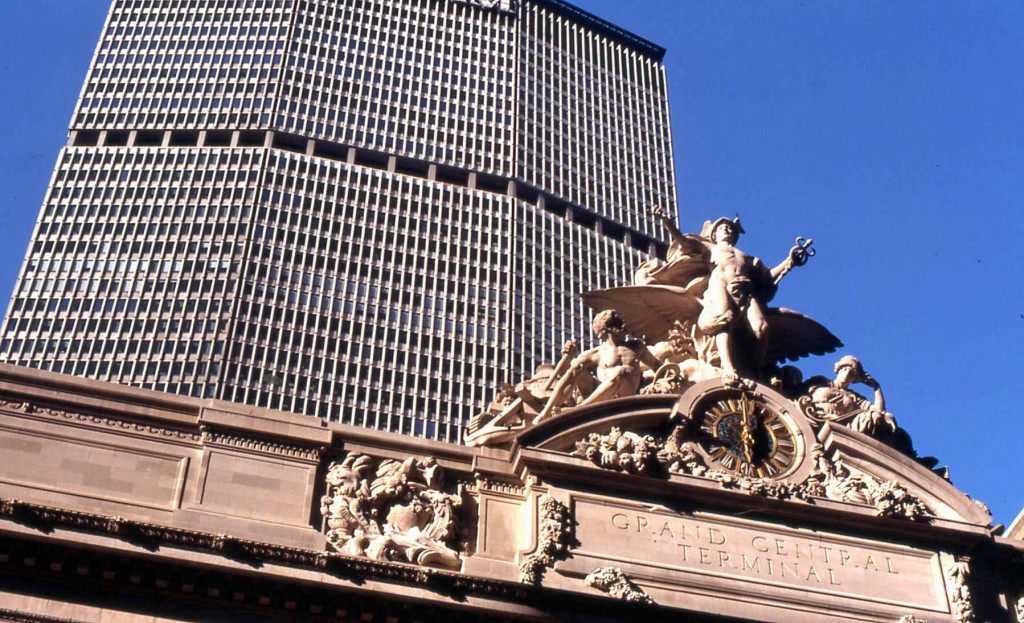 The very heart of Manhattan’s 42nd Street is Grand Central Terminal, New York’s principal monument to the age of the railroad, which celebrated its centenary in 2014:  http://www.mta.info/gct/facts.html..

Many New Yorkers have never forgiven the destruction of the other great terminus, Penn Station, McKim, Mead, and White’s triumphant pink granite temple to transportation, built in 1910 and flattened in 1963:  http://en.wikipedia.org/wiki/File:Penn_Station1.jpg.

Grand Central was the destination of steam-hauled trains from the north, ploughing down a cutting that was covered over when electrification became practical from 1889 onwards.

Begun in 1903, the terminal was structurally completed ten years later but not fully operational until 1927.  Its concourse is 275 feet by 120 feet and 125 feet high, lit by arched windows 75 feet high.  The Guastavino roof is decorated with a painted zodiac (which is for some reason reversed) by Paul Helleu.

It has sixty-seven tracks on the two levels, a turning loop and connections to the subway, including the 42nd Street Shuttle, which takes a minute to shunt between Grand Central and Times Square.

This was the starting point for some of the great trains of the early twentieth century, the Knickerbocker to St Louis, the Ohio State Limited to Cincinnati and the Twentieth Century Limited to Chicago to which, among its many luxuries, is attributed the original red-carpet entrance.

A major conservation campaign, led by Jacqueline Kennedy Onassis, saved Grand Central from demolition in the 1970s, and in 1994-8 a $197-million renovation was undertaken by LaSalle Partners and Williams Jackson Ewing, the restorers of the superb Union Station in Washington DC.

The quintessential Grand Central experience, other than catching a train, is to eat at the Oyster Bar [http://www.oysterbarny.com], where journalists used to take advantage of the acoustics to pick up scoops.  If that’s outside the budget, there’s plenty to eat in the food court:  http://www.grandcentralterminal.com/go/dirListing.cfm?currCat=2138210777,

To enjoy the best flashmob invasion of the Grand Central concourse go to http://www.youtube.com/watch?v=jwMj3PJDxuo.