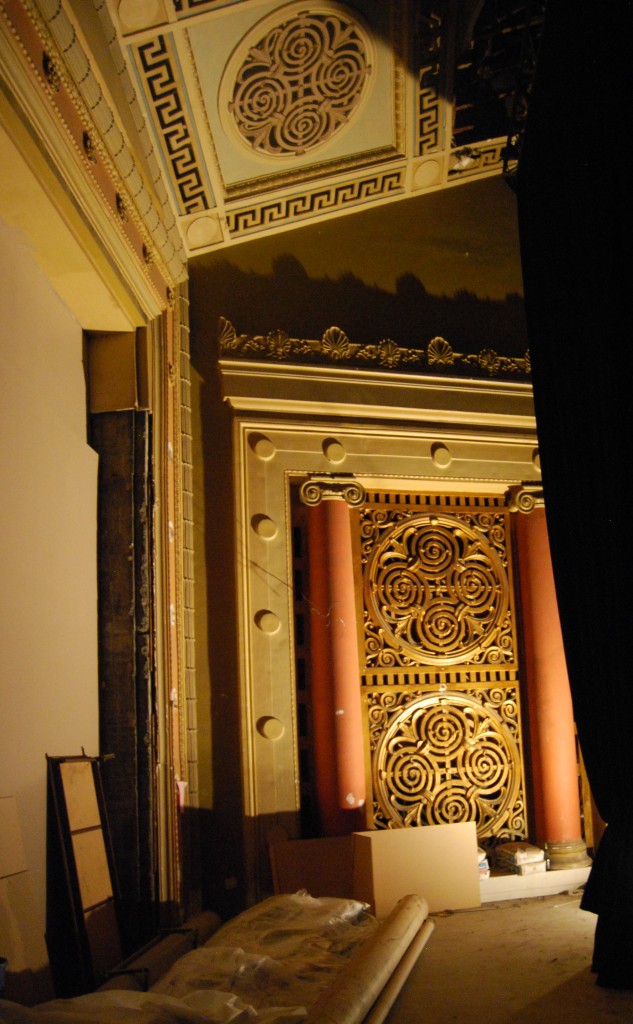 When I visited the Wellington Decorative & Fine Arts Society to present my Fun Palaces lecture in February 2011 my host, David Carson-Parker, showed me the Embassy Theatre, a restoration-project in which he had been involved.

The Embassy was originally and appropriately called the “De Luxe”.  It was designed by the New Zealand architect Llewellyn E Williams (1884-1967) for the theatre entrepreneur William Robert Kemball (1881-1969), and opened on October 31st 1924.

It was and is a notably distinguished building on a corner site facing Courtenay Place, four storeys high with an impressive classical frontage.  The grand tiled foyer and staircase remains:  originally the auditorium consisted of stalls and a generous balcony.  The stage was suitable for live performances and there was an orchestra pit, which was later used to house the console of a Wurlitzer organ and is now the second screen, the aptly-named Cinema Deluxe.

The De Luxe passed to another New Zealand cinema magnate, Robert Kerridge, who renamed it the Embassy.

In 1960 it was equipped with a wide screen for 70mm projection, and in the 1970s the auditorium was converted to a single rake by building out from the balcony front, so that the stalls space could be used for other purposes.

A 1991 project to convert it as a home for the Royal New Zealand Ballet came to nothing, and there was a risk that the Embassy would be lost.

To resist this possibility the Embassy Theatre Trust was formed in 1995.  In conjunction with the Wellington City Council, the Trust bought the building in 1997 and restored it to greater glory.

It re-opened in time to host the world premiere of Peter Jackson’s The Return of the King (2003), the final part of his Lord of the Rings trilogy.  As such, it now holds a place in the history of New Zealand film, and well as New Zealand cinema.

When David showed me round on a quiet summer Sunday morning, my first reaction was – what a splendid place to have coffee and read the Sunday papers.  You can eat and drink at Blondini’s Café & Bar, and indeed take your refreshments into the auditorium, which consists of the original balcony and a few additional rows beyond the balcony front.

The refurbished auditorium has all the comforts and amenity that contemporary filmgoers expect.  Behind the modern screen, however, the original proscenium and ante-proscenium remain in faded pale blue, grey, pink and gold.

David tells me there’s a scheme to make this original decoration visible from the auditorium.

When we showed images of it to the Wellington DFAS audience, people were astonished to discover that it still existed, and delighted to find that there’s more to the Embassy than meets the eye.

There is a detailed description of the Embassy Theatre at http://www.historic.org.nz/TheRegister/RegisterSearch/RegisterResults.aspx?RID=7500&m=advanced.  If you need to know what’s on at the moment, the website is at http://www.eventcinemas.co.nz/cinemas/the-embassy.aspx.