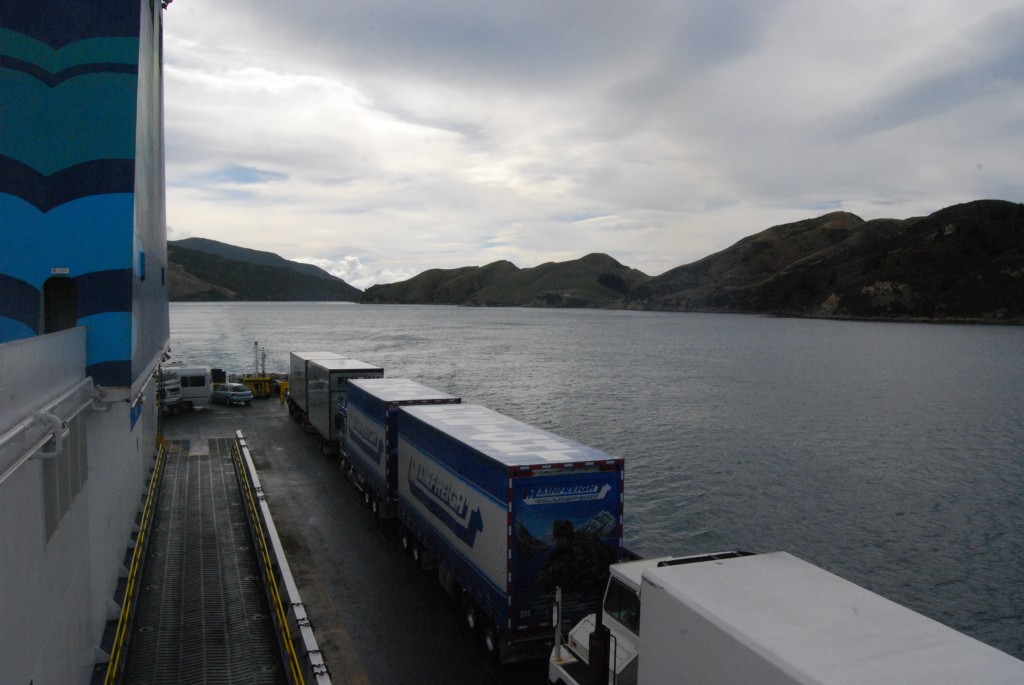 One of the finest ferry journeys in the world is the 70-kilometre Interislander voyage across the 24-kilometre wide New Zealand’s Cook Strait, between the south of the North Island and the north of the South Island.  The three-hour trip takes so long because it involves sailing in or out of Wellington Harbour and penetrating the drowned valleys of the Marlborough Sounds.  There’s a detailed history of the Cook Strait ferries at http://www.nzhistory.net.nz/culture/cook-strait-ferries.

It’s a fine, relaxing journey – as long as you’re a passenger, and not responsible for steering the ship.  The Cook Strait is notoriously rough and unpredictable, with particularly weird tidal surges:  http://www.niwa.co.nz/sites/default/files/images/imported/0011/43004/cookmov_2.gif.

The vessel, MV Kaitaki, felt oddly familiar.  It turned out to be a former Irish Ferry, originally built in 1995 for the Holyhead-Dublin route:  originally the MV Isle of Innisfree, it was latterly P&O’s MV Challenger, operating between Portsmouth and Bilbao.  ‘Kaitaki’ is the Maori word for ‘challenger’.

The other two vessels on the Interislander service, DEVs Arahura and Aratere, are rail-capable, purpose-built as the physical link between the railway systems on the two islands.

Though none of the ferries transport passenger rail vehicles, they make it possible to travel all the way from Auckland to Christchurch by surface public transport, using the Overlander, the Interislander ferry and the Coastal Pacific train [see http://www.seat61.com/NewZealand.htm].

Indeed, when I return to New Zealand at leisure I plan to use that route and then the TranzAlpine to reach the west coast of the South Island at Greymouth.

The errand that took me on the Interislander was a lecture for the Nelson Decorative & Fine Arts Society at the Suter Art Gallery [http://thesuter.org.nz/visitus.aspx].

While I was in Nelson my host, Ainslie Riddoch, and her colleagues gave me snapper for lunch at the Boat Shed Café [http://www.boatshedcafe.co.nz] and dinner at Harry’s Bar [http://www.harrysnelson.co.nz], where we admired the waiter’s sang froid in serving a ménage à trois in the far corner.  Ménage à trois is not, I’m assured, usually on the menu.

Ainslie’s husband, Hamish, told me about the holiday potential of the “Top of the South”, in particular, the tiny settlement of Collingwood, named – like Nelson and Wellington – after a British hero of the French wars a generation earlier.

During the 1850s gold rush there was a serious suggestion that Collingwood should be designated the capital of New Zealand.  Now it’s where tourists go to experience wide-open spaces, with curious outliers of history such as the Collingwood Cemetery (1857) and St Cuthbert’s Church (1873):  http://www.farewellspit.com/collingwood-new-zealand.html.

I’m fascinated by remote places that time passed by, so I will return to the Top of the South.