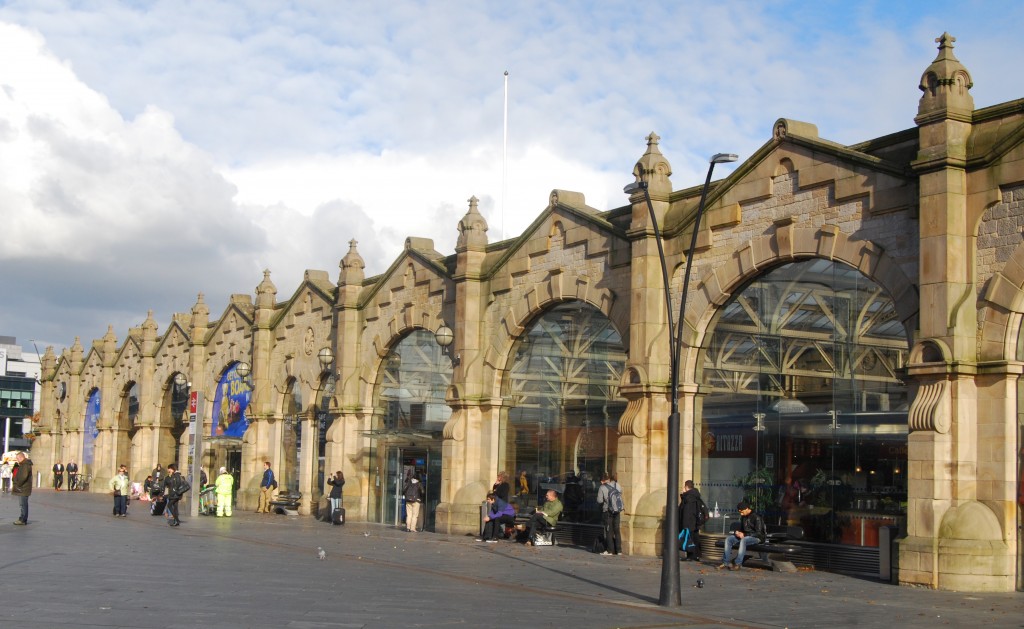 When I book a taxi and absentmindedly ask for Sheffield’s “Midland Station” the switchboard operators generally haven’t a clue what I’m talking about.  There’s been no reason to call it that ever since Sheffield’s other station, Victoria, closed in 1970.  Yet for years afterwards when I listened to black-cab driver’s radios they still referred to it as “LMS”, though it ceased to belong to the London, Midland & Scottish Railway on the last day of 1947.

Similarly, Sheffield’s trams – and possibly buses – still showed ‘LMS Station’ as a destination until the end of the 1950s.

It’s not a particularly spectacular building, though it was handsomely refurbished in 2002.  Indeed, the most impressive structure is out of sight – the culvert that takes the River Sheaf (after which Sheffield is supposedly named) underneath the platforms:  www.mikehigginbottominterestingtimes.co.uk/?p=5502.

The present frontage dates from 1905, created by Charles Trubshaw who also rebuilt the Midland Railway’s stations in Nottingham and Leicester and designed the Midland Hotel in Manchester.  Trubshaw’s first-class waiting room and the adjacent dining room are now occupied by one of Sheffield’s fine real-ale pubs, the Brewery Tap [http://www.sheffieldtap.com].

The location of the station was controversial when it was built in the late 1860s as part of the “New Road” extension from Grimesthorpe to Chesterfield.  The local landowner, the Duke of Norfolk, insisted on the southern approach being hidden in a tunnel (later removed) so that it was invisible from his residence, The Farm.

At the same time Sheffield Corporation, concerned that the streets to the east where Park Hill Flats now stand would be cut off from the town centre, demanded a right of way across the station footbridge.

Alan Williams, in an article about Sheffield Station in Modern Railways (June 2012), suggested that the railway obsession with ticket barriers may be less connected with fare-dodging (which according to the four train operators serving Sheffield is no worse on their lines than the national average) and more with national security, because the specification for installing the barriers includes enhanced CCTV with individual personal recognition:  “What better way of ensuring that we all dutifully line up to have our picture taken than in a secure station and gating scheme?”