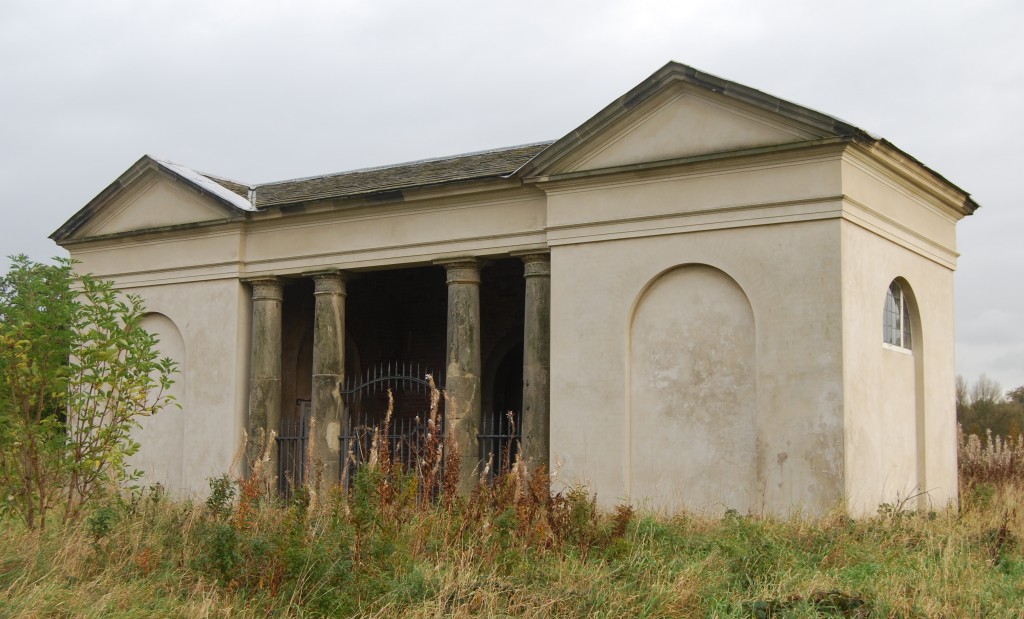 My Taking the Waters:  the history of spas & Hydros guests who didn’t think much of Quarndon Spa didn’t have the chance to see its upmarket neighbour, the Kedleston Bath House, because it’s in the middle of a golf course.

For clients who might scorn the “wretched lodging and entertainment” in the village of Quarndon, Sir Nathaniel Curzon of Kedleston Hall built the New Inn, now the Kedleston Inn (1761), on the stretch of new turnpike road that enabled him to extend his parkland.

As part of this development Sir Nathaniel built the classical bath house, designed by Jason Harris (Matthew Brettingham’s assistant), over a sulphur spring in Kedleston Park, about half a mile from the Quarndon Spa, with segregated baths and changing rooms divided by a central hall and entered through a recessed portico.  The baths themselves were originally overlooked by a statue of Aesculapius, the Greek god of medicine.

The Kedleston spring had been recognised by 1730, when Thomas Cox described it as “singular in curing old ulcers and especially the leprosy”.  James Pilkington, in A View of the Present State of Derbyshire… (1789), remarked –

Persons of a weak and relaxed habit have been much benefited by the use of this water.  After drinking it a few days they have found their spirits and strength return in a surprising manner, and in the space of a month a cure has been entirely effected.

By visiting the two nearby springs, visitors had a choice of drinking chalybeate (iron-bearing) or sulphurous waters according to their perceived needs.  Neither sounds a lot of fun.

The bath house, reduced to half its original depth in a 1925 restoration, is particularly difficult to see.  Access to the actual building requires permission (and the key) from the National Trust office at Kedleston Hall.

The 72-page, A4 handbook for the 2009 Derbyshire-based Taking the Waters:  the history of spas & hydros tour, with text, photographs and a reading list, is available for purchase, price £15.00 including postage and packing.  To view sample pages click here.  Please send a cheque, payable to Mike Higginbottom, to 63 Vivian Road, Sheffield, S5 6WJ.