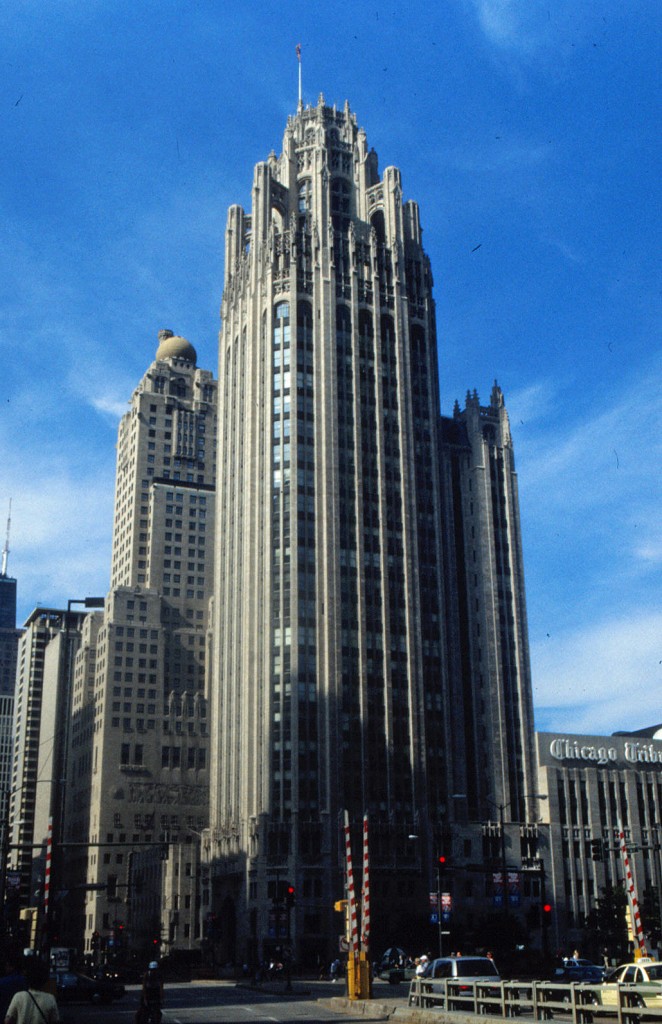 The Tribune Tower was built for the publisher of the Chicago Tribune, Robert Rutherford “Colonel” McCormick (1880-1955) – a tall, authoritative, notably hard-working arch-conservative, described by an opponent as having “the greatest mind of the fourteenth century”.

His great-uncle was Cyrus Hall McCormick Snr (1809-1884), the developer of the mechanical reaper who brought its manufacture to Chicago.  His maternal grandfather was Joseph Medill (1823-1899), Mayor of Chicago and the founder of the Tribune.

The Tribune was never knowingly undersold:  it claimed to be the “World’s Greatest Newspaper”, and its radio- and television-stations each took the call-sign WGN.

McCormick turned the architectural competition to build “the most beautiful and distinctive office building in the world” into a long-running promotional campaign as part of a circulation war with William Randolph Hearst’s Herald-Examiner.

Howells & Hood’s design must have appealed to McCormick because of its essential conservatism:  it is the last of the line of Gothic skyscrapers that began with Cass Gilbert’s Woolworth Building in Manhattan.  Its composition is a triumph of perpendicular lines, surmounted by a turret based on the Butter Tower of Rouen Cathedral, 34 storeys and 463 feet high.

Images of some of the other competing designs can be seen at http://www.chicagosavvytours.com/apps/blog/categories/show/931122-chicago-tribune-tower.

McCormick encouraged his correspondents to obtain stone fragments from monuments around the world, 120 of which are now embedded in the lower storeys.

The entrance door is surmounted by a celebrated stone screen depicting Aesop’s Fables, and the architects are commemorated by a pair of rebuses, that is, heraldic puns – a howling dog and a figure of Robin Hood.

The Tribune Tower is a fine example of an honourable architectural tradition, yet it’s ironic that the more influential competition entry was second-placed:  the design by the Finn Eliel Saarinen (1873-1950) was the basis for the Gulf Building (1929) in Houston, Texas.