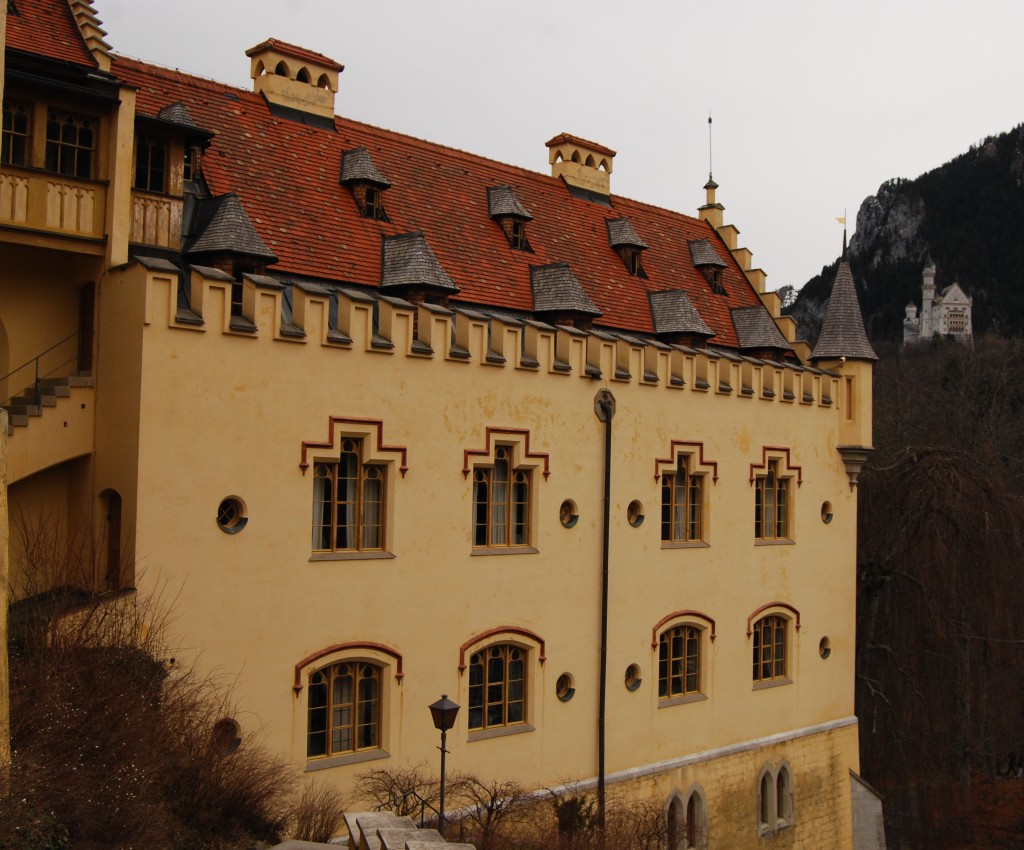 Among the tourist highlights of Bavaria are the fascinating castles of Hohenschwangau and Neuschwanstein, the former built by King Maximilian II of Bavaria (1811-1864) and both most vividly associated with his son, Ludwig II (1845-1886), who is a most interesting, sad figure.

Hohenschwangau reminded me a great deal of Horace Walpole’s Strawberry Hill, whereas the vast, unfinished Neuschwanstein has the dark, dreamy Gothic quality of Pugin’s Alton Towers and Alton Castle, and Burges’ Cardiff Castle and Castell Coch.

Both sit high above the valley – Hohenschwangau beside the lake Alpsee on a prominent hill which is no great problem to surmount by stairs or a circuitous driveway;  Neuschwanstein high up the valley side.

There’s no easy way to Neuschwanstein:  the shuttle bus only runs in the summer;  the horse-drawn carriages are in heavy demand;  the line of least resistance is, paradoxically, to walk.  It took me over half an hour, with regular stops on the way.  Even the wheeled transport gives out well below the castle gatehouse.

Both castles operate a strict timed-ticket admission system, to the nearest five minutes, and there are no compromises for latecomers.  My guide at Hohenschwangau was audible, precise and unhurried.  Neuschwanstein was a very different matter.  When I arrived at the gatehouse there appeared to be a species of riot going on, which turned out to be a large group of Italian teenagers who stood between me and the gents, though not for long.

When we got inside we were herded round in a group of over forty, with a determined lady guide who did surprisingly well in the circumstances.  The traipse through a series of astonishing interiors, intricately decorated like a mad version of the Midland Grand Hotel at St Pancras, is crowded with swans (hence Neuschwanstein – new-swan-stone) at every turn.

There’s little wonder that Ludwig, a seriously damaged personality, brought up by distant parents, conflicted about his sexuality and his Roman Catholicism, introverted and reclusive and addicted to building using his own rather than the state’s financial resources yet drowning in debt, was eventually dethroned by despairing practical politicians.

His mysterious death four days after his deposition secured his place as a national hero.

Neuschwanstein was opened to the public six weeks after his death, and his castles, ironically, have become a significant source of prosperity to the surrounding district.