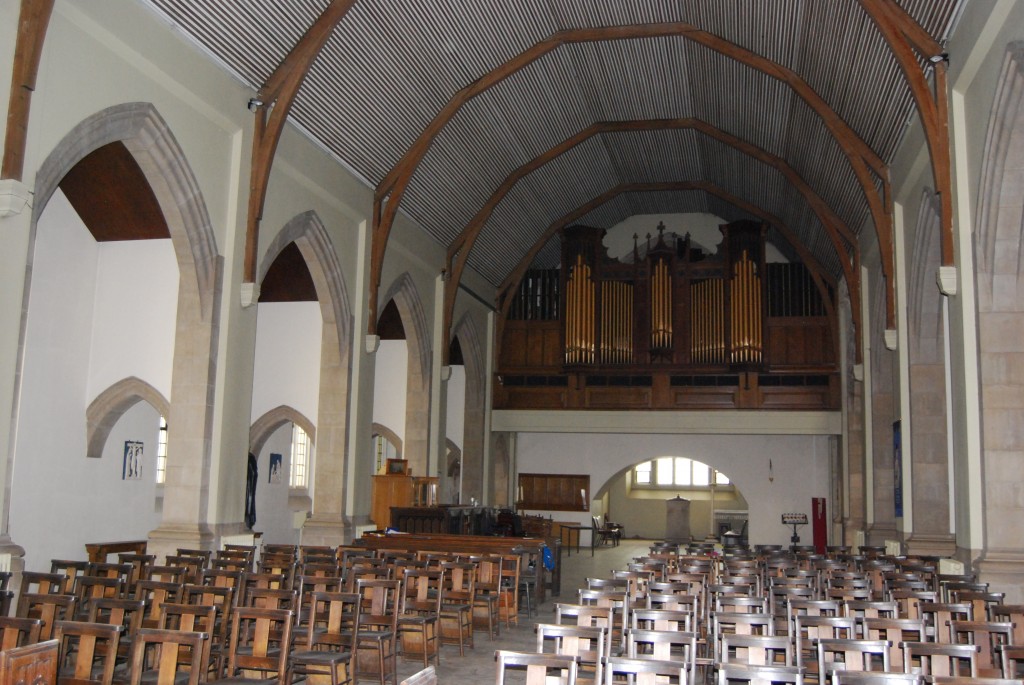 I remarked in an earlier blog-article that I couldn’t understand how the Gloucestershire architect Kenneth B Mackenzie got the commission to build St Cecilia’s Church, Parson Cross, Sheffield in the late 1930s.

He certainly had no previous experience of designing churches, though he was apparently a sensitive restorer of existing church buildings in the Diocese of Gloucester.

St Cecilia’s is a fine essay in twentieth-century Gothic revival design.  Its stone exterior sits comfortably in its tight little close of council houses, now protected by trees that have matured over three-quarters of a century.  Its stubby little tower is in scale with its domestic surroundings, so that Chaucer Close has the feeling of a village green in the midst of the vast Parson Cross municipal housing estate.

Within, its concrete rendered walls, lit by the plain glass of the rectangular traceried windows, enclose a calm, expansive space, entered through a narthex into an aisled nave, with a sanctuary dominated not by an east window but by a reredos that was added in 1971.  Above the narthex is a west gallery filled with the magnificent case of the 1986 Cousans organ.

Kenneth Mackenzie was clearly fluent in the aesthetic language that the Anglo-Catholic congregation required, and left plenty of scope for additions and embellishments.

He was, like many architects of his generation, less adept at making his building easy to maintain.  He probably, in the late 1930s, assumed that future generations would give priority to preserving the building, in particular giving regular attention to the slate and asphalt roofs.

He couldn’t know that the electrical wiring installed in 1938 would still be in place seventy-five years later.

And he took it for granted that the stream that runs beneath the building would behave itself, which it hasn’t.  The presbytery, always known as the Priory, regularly flooded before it was demolished in 1994, and now that the church is disused the undercroft floor is heaving.

As a source close to the Church Commissioners remarked, the current difficulties with the building arise from defects of maintenance, not from its structural integrity.

It’s certainly untrue that St Cecilia’s Church has necessarily reached the end of its life.

But the unintended consequences of Kenneth Mackenzie’s decisions about structure and design have left a heavy legacy for anyone who contemplates bringing it back to any kind of use.

It seems that Kenneth Mackenzie was the nephew of Mr A R Heathcote, the then anonymous benefactor who paid for the building.