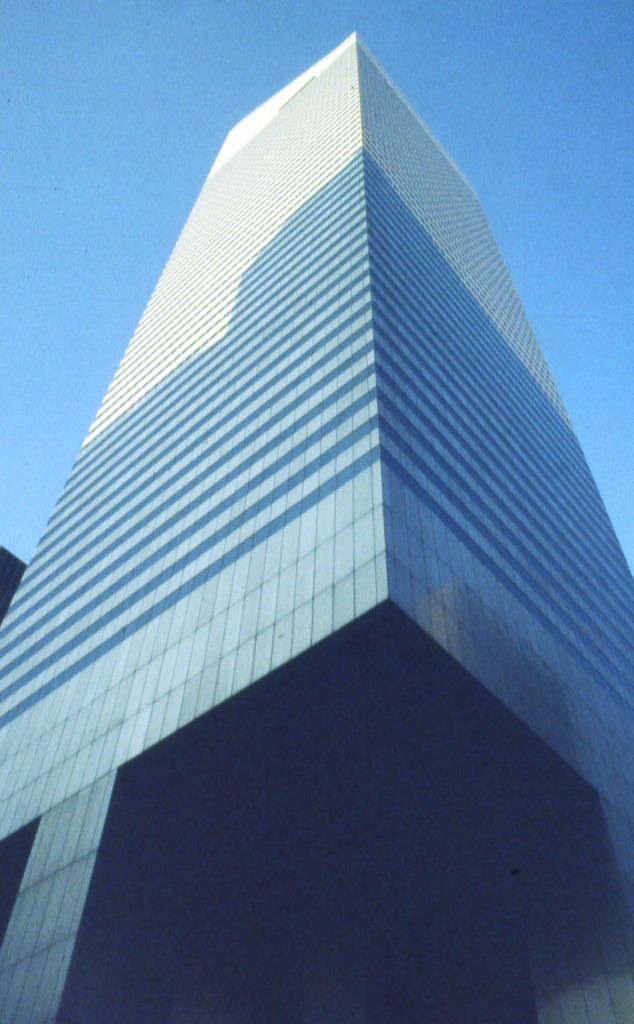 When they designed Citicorp Center, now renamed 601 Lexington Avenue, in Manhattan in 1977, the architect Hugh Stubbins and the structural engineer William LeMessurier were faced with the uncompromising elders of St Peter’s Evangelical Lutheran Church, who were entirely happy to have their tired nineteenth-century Gothic building replaced but refused point-blank to give up its corner site.

Consequently, William LeMessurier supported the tower on four stilts planted firmly in the centre of each side so that it overhangs the corners of its footprint.  This odd-looking construction is stabilised by a series of stacked braces that transfer the load of the 59-storey structure to the nine-storey supporting columns.

The Citicorp Center was fitted with a 400-ton tuned mass damper to stabilise the effect of high winds.  Other tall towers of the period, while rolling safely with the wind, had made their inhabitants nauseous.

The wedge-shaped top was intended to carry solar panels which were never installed because the slope faces north.

The building is remarkable, not only for its engineering attributes, but for the fortuitous discovery and surreptitious repair of its structural weaknesses.

Within a year of the opening, LeMessurier received a phone-call from a trainee architectural engineer questioning the ability of the centre columns to support the building in extremely high winds.

Niggled, LeMessurier revised his calculations, and realised that in following the regulations by calculating wind-resistance square to the building he’d ignored the potential effects of quartering winds, hitting the tower cornerwise where there was no support to ground-level.

Casual discussions of the specification for a new project alerted LeMessurier for the first time to the fact that his office had sanctioned the use of bolted braces instead of welded ones in the Citicorp tower.  This made the building vulnerable to a once-in-55-year wind, but if the tuned mass damper was disabled by a power failure, the vulnerability increased to once in every sixteen years.

This came to light in June, just at the start of the hurricane season.

The building’s owners, Citibank, a team of construction-industry specialists and the City of New York – all of them anxious to avoid a public panic – arranged for the two-hundred-odd braces to be quietly patched with heavy steel plates, one by one, during evenings and weekends, without disturbing the building’s users.

The press were fed an innocuous explanation which remained unprobed because, as the work began, the entire New York newspaper industry was shut down by a strike.

And the city’s Office of Emergency Management created an emergency plan to evacuate the building and 156 blocks of the surrounding neighbourhood if high winds were forecast.

Part way through the process Hurricane Ella headed directly for New York City, only to turn eastwards and follow the coast northwards towards Canada.

This remarkable episode remained outside the public domain for twenty years until an article in the New Yorker [http://people.duke.edu/~hpgavin/cee421/citicorp1.htm] was published in May 1995.

Le Messurier, whose entire career had been on the line eighteen years earlier, was hailed for his integrity in owning up to the problem and providing a solution.  601 Lexington Avenue is now rated as resistant to a once-in-700-year hurricane even without the damper.

A more critical view of Le Messurier’s ethics can be found at http://www.crosscurrents.org/kremer2002.htm.

Other accounts of the whole episode are at http://www.damninteresting.com/a-potentially-disastrous-design-error and http://en.wikipedia.org/wiki/Citigroup_Center.