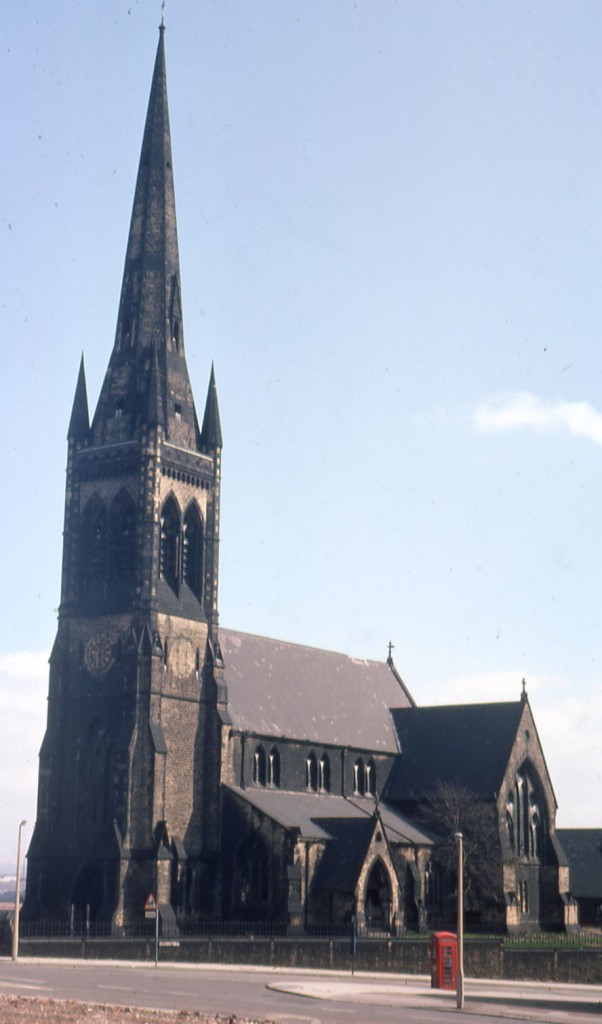 My local community magazine, the Burngreave Messenger (Issue 112, June 2014), recently included an article by Elizabeth and Gordon Shaw about the Cornerstone, a stone-built community centre on the corner of Carwood Road and Grimesthorpe Road on the hill above Sheffield’s industrial east end.

The article proudly commemorates the continuous 127-year history of what was originally the meeting hall (1887) for the now vanished All Saints’ Church, Ellesmere Road, founded in 1869 by the steel magnate John Brown (1816-1896, Sir John Brown from 1867).

It’s good that this modest building is still used and valued, but it’s a pity Sir John’s great church was demolished in 1978:  http://www.geograph.org.uk/photo/3824154.

Like his neighbour and rival, Mark Firth, John Brown rose from humble origins in the Sheffield cutlery trade:  his successive breakthroughs were inventing the conical spring railway-buffer, which he eventually included in his coat of arms, manufacturing railway rails from Bessemer steel and rolling armour plate to clad ships of the Royal Navy.

On the hill above his works Sir John erected a magnificent Gothic church designed by Flockton & Abbott with a spire that could be seen from miles around.  When the original budget of £5,000 proved inadequate he flatly refused to accept a contribution from the Church Extension Society:  the final cost was £12,000.

This huge, cruciform parish church would have served as a small cathedral.  It inevitably became unsupportable as the surrounding housing was cleared.

It and the neighbouring Petre Street Methodist Chapel were replaced by a diminutive Local Ecumenical Partnership building, St Peter’s Ellesmere, which has a token spire:  http://www.burngreavemessenger.org/community/belief-in-burngreave/st-peters-ellesmere.

When All Saints’ came down the eight bells were rescued and passed on to the 1911 Austen & Paley church of St Anne, Worksop.  The war-memorials were transferred to St George’s, Portobello, which itself closed in 1981 and is now used by Sheffield University for lectures and student accommodation.

All Saints’ is the biggest single architectural loss, as a historic building and as a landmark, in the Lower Don Valley, the site of Sheffield’s heavy steel industry, a place with little beauty and a tremendous story to tell.