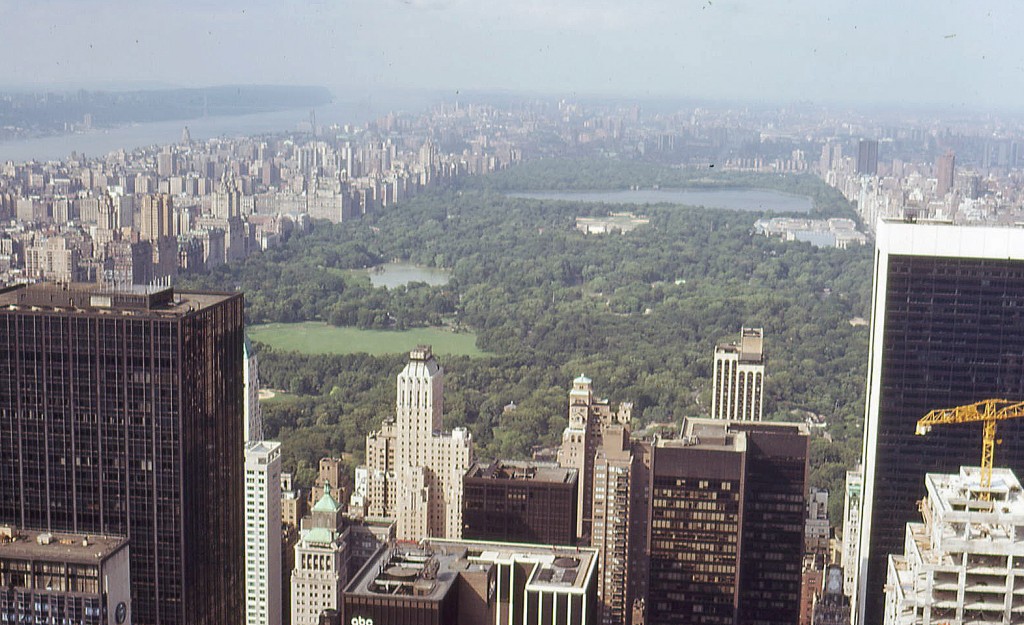 Manhattan would be overwhelming without Central Park, the 843-acre green oblong that relieves the remorseless gridiron of streets and avenues.

With admirable prescience that arose from thirty years of debate, in 1853 the city’s authorities purchased the one remaining largely unused site within the 1811 street-plan for five and half million dollars.

The park was laid out from 1856 onwards to the designs of Frederick Law Olmsted and Calvert Vaux.

The principle of their “Greensward Plan” was that a variety of landscapes, ranging from formal gardens to near wilderness, should present themselves to visitors in a series of apparently natural transitions. The project took twenty years to complete, and occupied up to 3,000 workers.

It is salutary to remember, when walking in Central Park, that to all practical purposes the entire landscape is artificial.

At a time when buildings never reached a greater height than five or six storeys it was possible to arrange, by planting around the park’s borders, that the city would in no way encroach on the illusion of a natural landscape within.

In fact, now that great tower blocks peer above the trees in most directions, an excitement that Olmsted and Vaux could not have predicted sharpens the Park’s appeal.

The designers provided a range of occasional buildings around the Park – the cast-iron Ladies’ Pavilion, the Belvedere Castle and the Gothic Revival Dairy. The most formal composition of all, the Bethesda Fountain, is, significantly, set at an angle to the street-gridiron.

The integrity of Olmsted and Vaux’s design has gradually been encroached upon by other, more obtrusive structures, such as the Delacorte Theater, the Wollman Memorial Rink, the Central Park Zoo and the Metropolitan Museum of Art.

When Edward S Clark of the Singer Sewing Machine Co developed an apartment block at West 72nd Street in 1884 it was nicknamed the Dakota because it was so far out of town.

As the empty plots disappeared under bricks and mortar – and later concrete and steel – Central Park remained as an astonishing piece of urban green half a mile wide and two-and-a-half miles long, stretching from Fifth Avenue to Central Park West (a continuation in all but name of Eighth Avenue) and from 59th Street (also Central Park South) to 110th Street (otherwise Cathedral Parkway).

It’s impossible to overstate the importance of Central Park to New York life. It’s a breath of fresh air, a meeting-place for concerts and wakes, a setting for romance and sport. Sometimes it’s been – and still can be – unsafe and notorious for crime, but under normal circumstances, in daylight, it’s one of the most salubrious and enjoyable places in the whole of Manhattan.