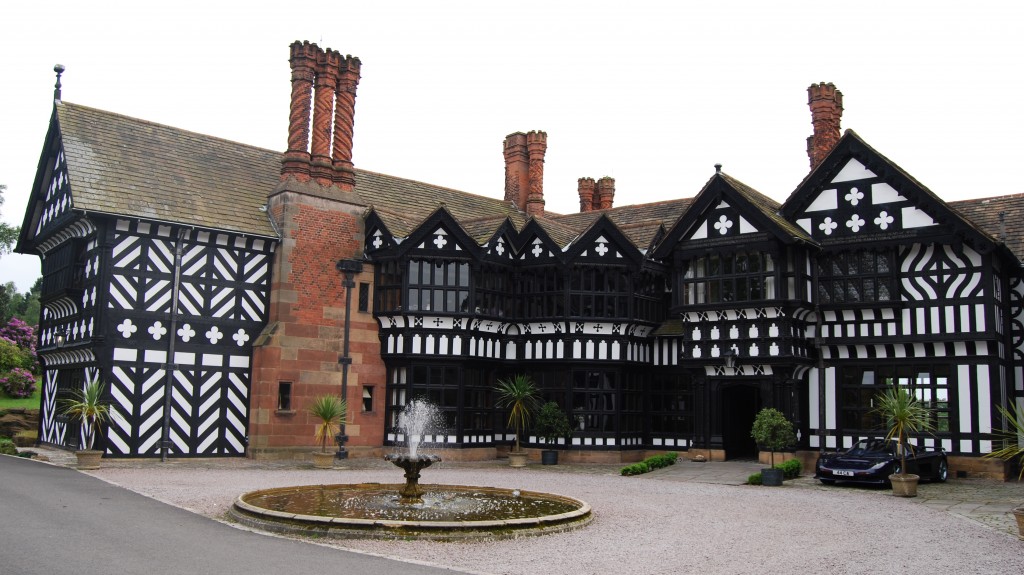 Robert Spear Hudson (1812-1884) was the man who first popularised soap powder, working from his modest shop in West Bromwich. He eventually moved his business to a factory in Bank Hall, Liverpool, and went to live in Chester.

His son Robert William Hudson (1856-1937) became extremely wealthy and sold the business to Lever Brothers in 1908.

He commissioned the distinguished local architect Edward Ould to build a Black-and-White Revival house in 1891 on a site near Bidston Hill on the Wirral.  It bears more than a passing resemblance to Little Moreton Hall, near Macclesfield – but built in reverse. It was named Bidston Grange.

Typically of its time and its style, Bidston Grange contained sumptuous glass by William Morris, and architectural bric-a-brac with antique associations – dining-room doors from a tea-clipper and a fireplace dated 1577 reputedly from “Sir Walter Raleigh’s former home”.

It was apparently the model, or at least the inspiration, for Cecelianhof, the Potsdam residence of the Crown Prince Wilhelm, son of Kaiser Wilhelm II, built c1911 and subsequently the site of the signing of the Potsdam Agreement of 1945.

Because Lady Royden disliked the way its setting was encroached by housing [http://www.geograph.org.uk/photo/218605] the 1891 structure was dismantled and re-erected a property she had inherited five miles away at Frankby.

There it replaced a house of 1868-70, originally built for Septimus Ledward JP, which took its name ‘Hillbark’ from a stone barn that had stood for several centuries.

The original site at Vyner Road South, Bidston, is now a public garden.

When Sir Ernest Royden died in 1960, Hill Bark was purchased by Hoylake Urban District Council and converted into a residential home for the elderly.

It was sold in 1999 for £300,000 and converted first into a catering-facility specialising in weddings, opened in 2000, but using only the ground-floor rooms. In 2002 it was restored as a luxurious 19-bedroom five-star boutique hotel: http://www.hillbarkhotel.co.uk.