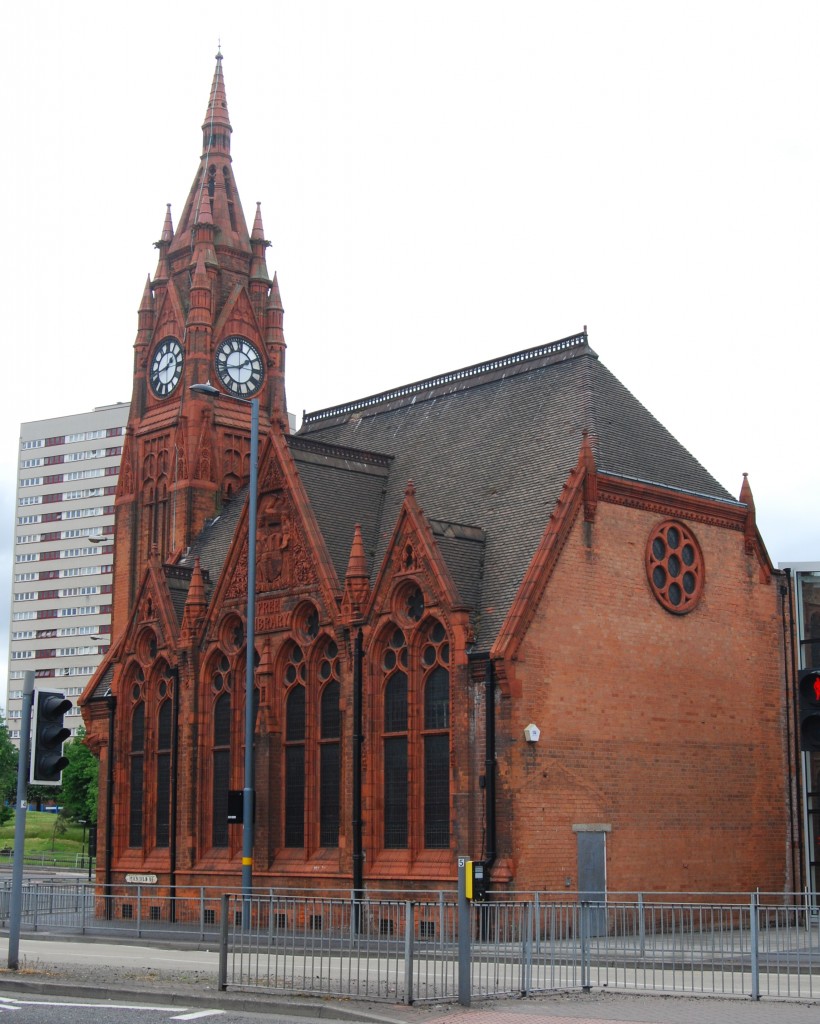 Spinning round the roundabout on Icknield Street, Ladywood, on the outskirts of central Birmingham, you could be forgiven for thinking that Spring Hill Library was a church, because of its imposing 65-foot clock tower.

In fact, William Martin’s 1893 design in a fortissimo version of Martin & Chamberlain’s characteristic Gothic dominates what was once a street-corner site and is now an island on the Middle Ring Road.

The original layout placed a double-height public reading-room on the ground-floor with a closed-access lending library in the gallery upstairs.  This formation was reversed in 1926, to give easier access to lending-library users by extending the gallery as a reading room and cluttering the ground-floor space with shelves.

The library was an immediate success, breaking Birmingham city branch libraries’ record for issuing books in its first year of operation.  There was an incident in 1895 when a youth was sentenced to six weeks’ hard labour for “throwing books around the library and resisting arrest”.

The exterior bears the scars of a much later drama, when a number 8 bus was in collision with a fire engine and overturned, killing one and injuring over thirty more.

When Ladywood was redeveloped in the early 1970s, the intended path of the ring road was realigned in response to loud objections to the demolition of the library.

More recently, the surrounding redevelopment has itself been redeveloped by the construction of a splendid Tesco supermarket which opened in 2010 and provided the Victorian library with a practical entrance and a lift.

Four years later, this functioning branch library was threatened by closure because of the financial constraints on the city council:  http://www.birminghammail.co.uk/news/four-birmingham-libraries-facing-closure-6556612.

Public libraries are an endangered species, Grade II* building less so.  But it would be a pity if Spring Hill Library ceased to be the home of books.