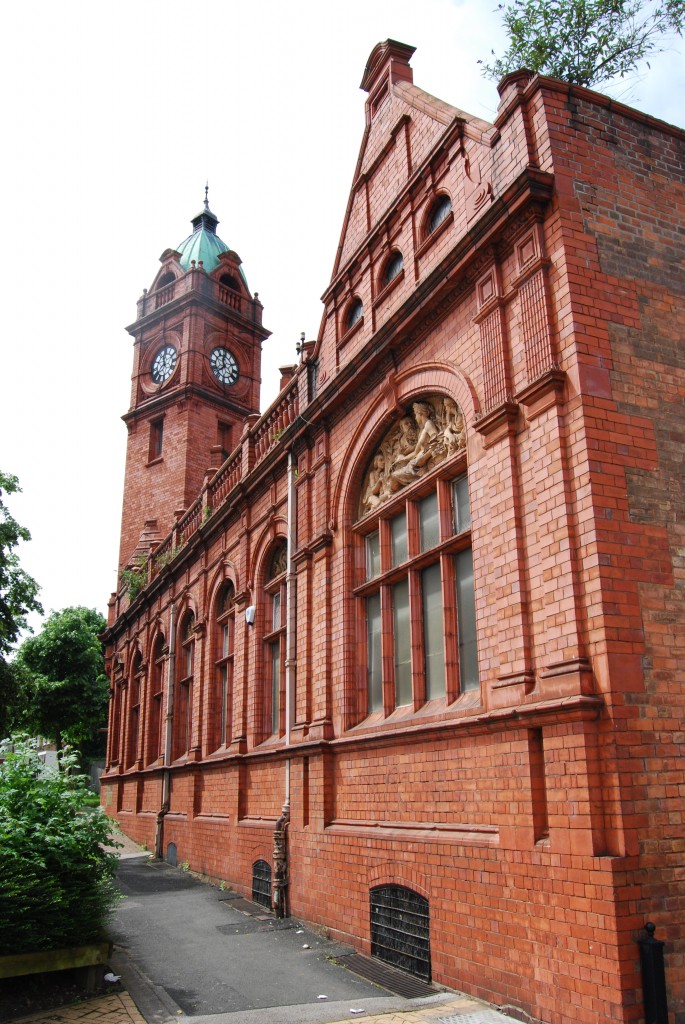 One of the smallest and most magical of Birmingham’s terracotta municipal libraries is Bloomsbury Library at Nechells, designed by Jethro Anstice Cossins and Barry Peacock and opened in 1892.

Its wedge-shaped footprint shows that Bloomsbury Library once dominated a road-junction;  now the ring-road intersection dominates it.

The attached police and fire station has been demolished.

The largest of the exterior relief panels by the Birmingham artist Benjamin Creswick shows a female figure representing Birmingham receiving the gifts of the city’s Arts, Crafts and Industries.  The others reflect the life of the community that the building was built to serve – agriculture and industry, sport and home life from childhood to old age.

The Library was restored in 1993, and when I last visited in 2013 it was fully functioning, though the entrance was shored up and planned renovations were on hold.  Since then its condition has gone from bad to worse and is now dire.

The heating system is beyond repair and the theft of lead from the roof has caused sufficient water ingress to close the place.

The Birmingham Mail has revealed that the library staff have been quietly told that the game is up [http://www.birminghammail.co.uk/news/local-news/historic-birmingham-library-closes-after-6247779] and this has been tacitly confirmed by a local councillor:  [https://birminghamlibrariescampaigns.wordpress.com/2013/12/13/the-future-of-bloomsbury-library-in-nechels].

Library services to the local community are being maintained by a mobile library [http://www.libraryofbirmingham.com/1318249091974] and the library was offered for lease at a peppercorn rent with a guide-price, £100,000, that reflected the amount that would be needed to make the Grade II listed building useable again:  http://www.rightmove.co.uk/property-for-sale/property-48428552.html.  According to the Victorian Society, it was sold at the end of October 2014.