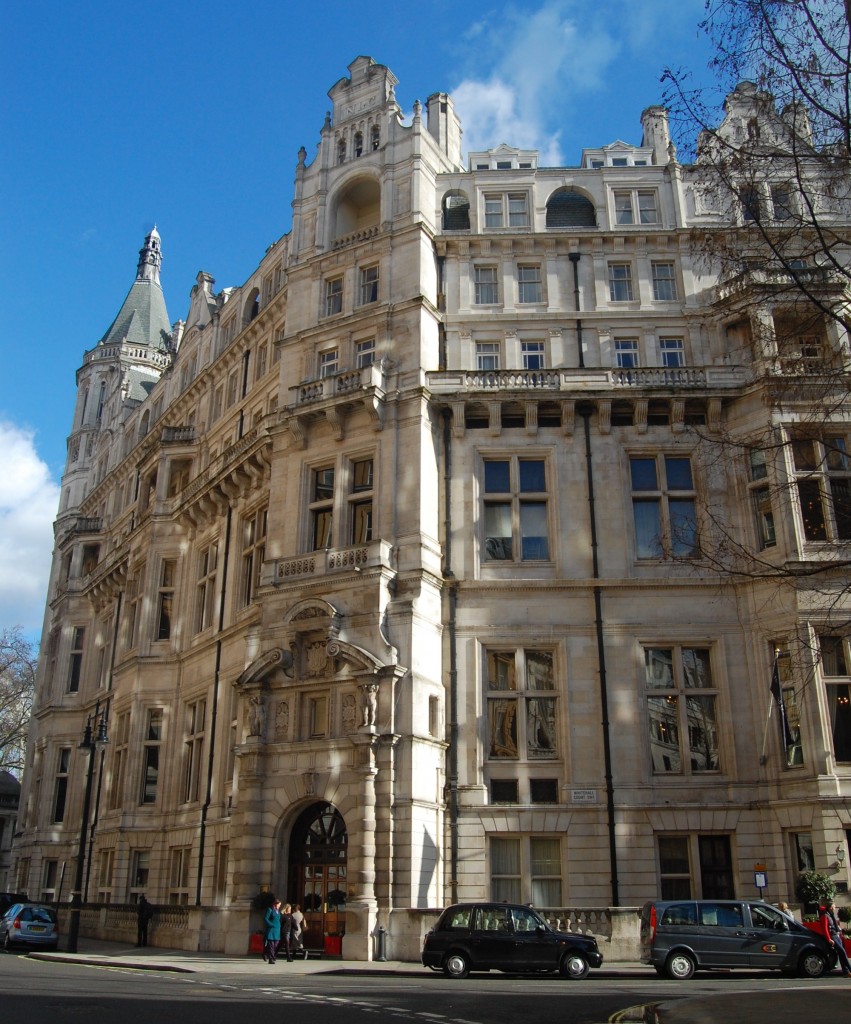 Thanks to a Victorian Society visit to the National Liberal Club [http://www.nlc.org.uk], entertainingly led by Ronald Porter who is a member of both Club and Society, I now more fully understand the context of one of my favourite anecdotes about F E Smith, latterly Lord Birkenhead (1872-1930).

The Club was founded in 1882 “to provide a central meeting-place for Metropolitan and provincial Liberals, where all the comforts of life should be attainable at what are called ‘popular prices’” and opened in 1887.

It was located away from London’s traditional clubland on the corner of Northumberland Avenue and the Thames Embankment.  Nowadays its terrace looks across to the London Eye.

Its architect was Alfred Waterhouse (1830-1905), the great proponent of terra-cotta and faience whose style was derisively termed “slaughterhouse Gothic” by his architect contemporaries.

The National Liberal Club is a huge place even after the bulk of the building, including five floors of bedrooms, was sold in 1985 to become the Royal Horseguards Hotel [http://www.guoman.com/en/hotels/united_kingdom/london/the_royal_horseguards/index.html]. It remains one of the largest private club-houses in the world.

It’s a palatial shrine to comfort, conviviality and the principles of Liberalism.  There are, predictably, more pictures and statues of Mr Gladstone than you can shake a stick at, and portraits of every Liberal worthy, not least the Derby artist Ernest Townsend’s 1915 portrait of Winston Churchill, which for a couple of decades was not displayed after the former Tory-turned-Liberal turned Tory again in 1924.

The building is also a shrine to the extravagant but relatively inexpensive decorative possibilities of glazed brick.  Like Waterhouse’s Victoria Building at what is now Liverpool University, the interiors are predominantly brown and beige, warm and comfortable, and particularly suitable for the then new electric light.

The Tory MP F E Smith (later Lord Birkenhead) used to drop in, while walking between his chambers at the Temple and the Houses of Parliament, to use the gentlemen’s lavatory.  He was eventually approached by the club porter and asked if he was a member, to which he famously replied, “Good God! You mean it’s a club as well?”

When you see the lobby of the National Liberal Club, that story suddenly makes more sense.