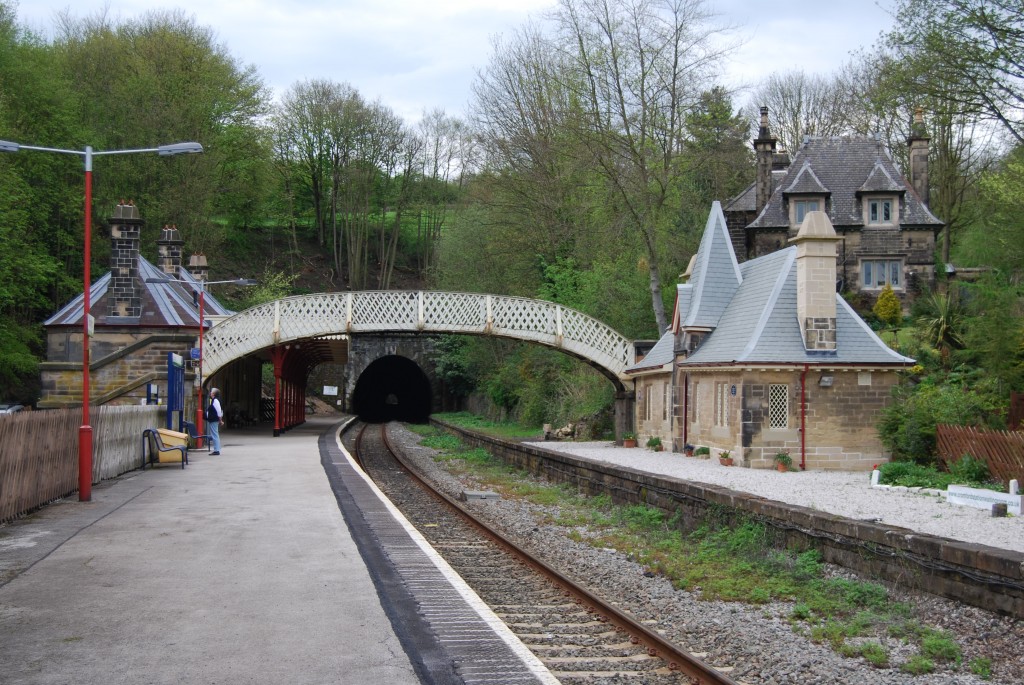 The little railway with the long name – the Manchester, Buxton, Matlock & Midland Junction Railway – only reached Rowsley, just short of the Chatsworth estate, before the money ran out and railway politics cut it short.  The original Rowsley station still stands, isolated in the middle of a retail park more depressing (in my view) than the contractor’s yard it replaced.  When the line to Manchester was resumed in the 1860s, it turned left and headed up the Wye valley, rather than following the original route.

One of the directors of the MBM&MJR was Joseph Paxton, the protégé of the Bachelor Duke of Devonshire.  He sketched the first design for his Great Exhibition building, the Crystal Palace, on a sheet of MBM&MJR blotting paper during a directors’ meeting.

Paxton designed the company’s stations at Rowsley and Matlock, and his son-in-law, George Henry Stokes, did the particularly attractive station at Cromford in what is generally described as “French château” style.  The existing main, down-side building is later, but the tiny up-side waiting room and the elaborate stationmaster’s house are Stokes’.

Ever since main-line services ceased in the late 1960s, the Cromford station buildings have been neglected, until in recent years the Arkwright Society has renovated the down-side building as a suite of two offices [http://www.arkwrightsociety.org.uk/other/cromford_station_channel/cromford_station] and Ryan Phelps has converted the waiting room opposite into a compact, high-quality holiday let [http://www.cromfordstationwaitingroom.co.uk/] which sleeps two very comfortably, and four at a pinch.

Here you can live in great comfort, with an hourly train-service up and down the Derwent valley between Derby and Matlock.  The first train north comes through at 0605, and the last one south passes at 2249.  Sleep would have been more of a problem when the great coal trains lumbered through twenty-four hours a day.

In a spare twenty minutes I took the guests on the 2010 Waterways & Railways of the Derbyshire Peak tour to take a look at Cromford Station.  One lady, curious to know if a train was due, pressed the “enquiries” button, expecting a recorded announcement, and was fascinated to be put in touch with a man who not only gave her the time, but checked that the driver was ready to leave Matlock on time.  And so fifteen very mature people stood fascinated, waiting for the headlight to appear in the tunnel, and to photograph a very brightly painted diesel railcar.  We’re all anoraks really.