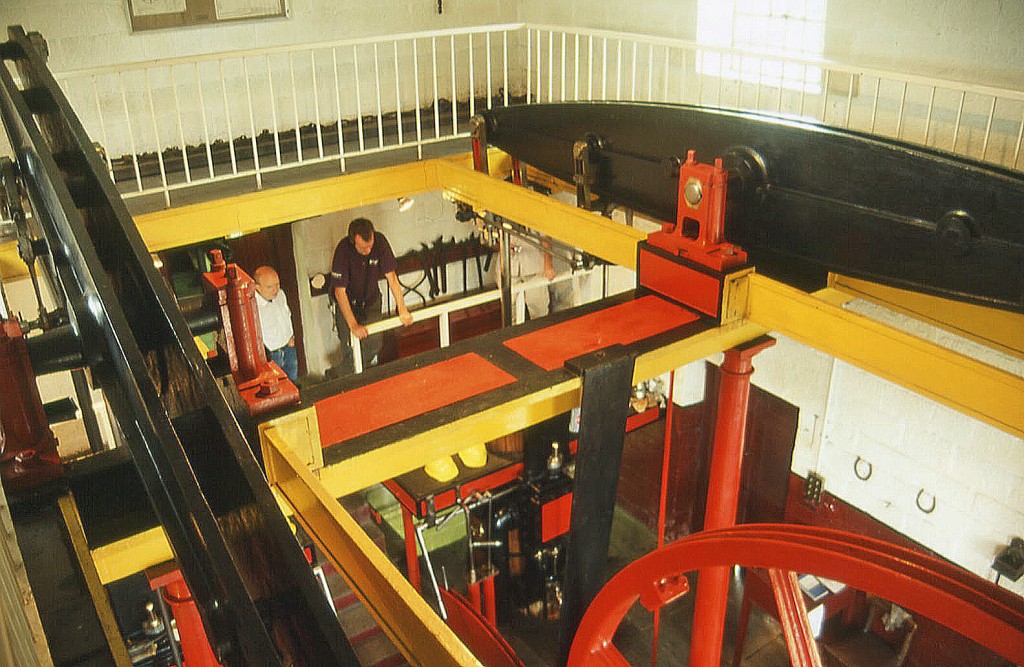 The Ecclesbourne Valley Railway runs an excellent ‘Rails and Quarries‘ tour from their Wirksworth station, using their diesel railcar to run up the steepest section of line in use in the UK – 1 in 27 – to Ravenstor, the foot of a slightly mysterious incline that connected with the Cromford & High Peak Railway at Middleton Bottom.

The day I visited, the guide was Vince Morris – informative, professional and endlessly patient with people who struggle with stiles.  His itinerary involved a steep climb through the National Stone Centre [http://www.nationalstonecentre.org.uk] to the High Peak Trail [http://www.derbyshire-peakdistrict.co.uk/thehighpeaktrail.htm], which follows the trackbed of the Cromford & High Peak Railway, up the 1 in 8½ incline to Middleton Top Engine House and then over the fields and through the derelict moonscape of Middle Peak Quarry and back through the centre of Wirksworth.

Middleton Top Winding Engine [http://www.middleton-leawood.org.uk] is an interesting survival, the only remaining example of eight built by the Butterley Company to haul trains up and down the inclines which in 1825 were judged the most effective and economical method of running a railway over the Peak massif.  William Jessop II was a director of both the Butterley Company and the C&HPR:  his younger brother, Josias, had engineered the railway though he died during the construction period.  The total cost of the railway, when it was completed in 1831, was £149,206 16s 8d.  Of this the eight winding engines cost £20,000.

More significantly, the largest single item of expenditure was for cast-iron rails, provided by the Butterley Company for £61,950.  The Butterley Ironworks was incapable at that time of manufacturing wrought-iron rails, so that when the railway wanted to replace horses with locomotives (as Josias Jessop had suggested in his initial specification), the track couldn’t stand the weight and had to be re-laid in wrought iron from end to end.

As the Americans say, do the math.

This unique railway, which was technologically sound when it was promoted in 1825 and an anachronism almost as soon as it opened in 1831, continued to work with periodic modifications on the principle that if it works, don’t fix it.  Middleton Top stopped winding in 1963, but at the Sheep Pasture Incline further down the line a steam engine built in 1883 was replaced with an electric winder in 1965.  The entire line finally closed in 1967.

Events on the Ecclesbourne Valley Railway can be found at http://www.e-v-r.com/ticketing/events10.htm.

The stretch of the Cromford & High Peak Railway between Whaley Bridge and Hindlow, some of which was abandoned as far back as 1892, can be explored from the comfort of an armchair thanks to http://picasaweb.google.com/montyburns56/CromfordHighPeakRailway.  I’m grateful to Paul Jones for this link.