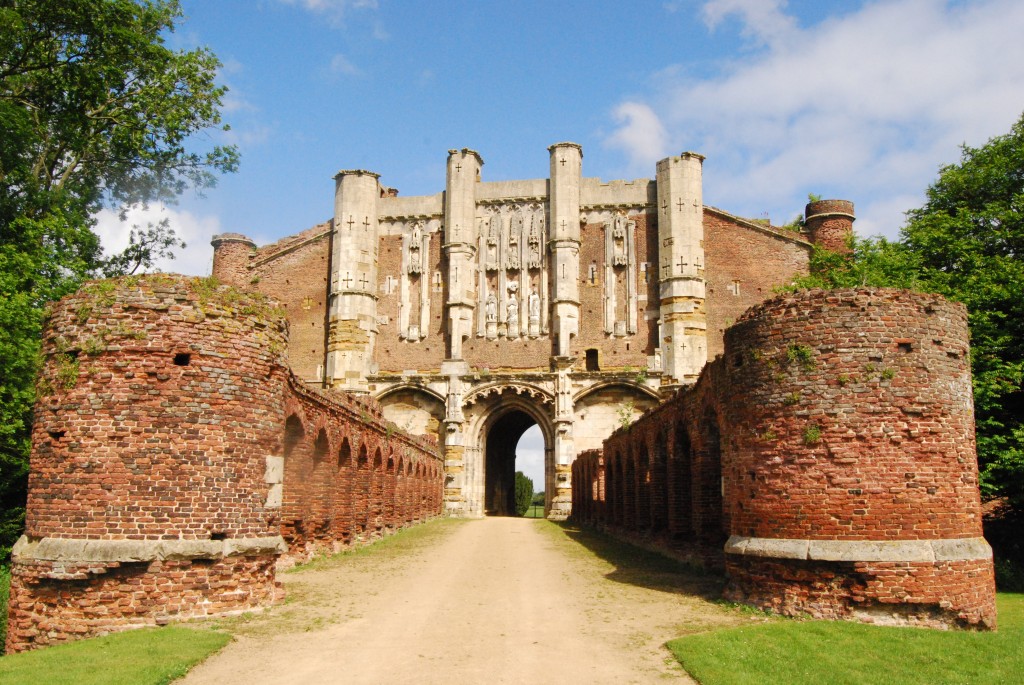 That may be so, but not necessarily, because it’s hard to credit other great buildings that have vanished long ago and can now be judged only from contemporary illustrations or archaeological remains.

Thornton Abbey, in the very far north of Lincolnshire, is one such.  Its fourteenth-century gatehouse is huge – the biggest of all surviving monastic gatehouses in England – and particularly splendid, built of brick at an unusually early date.  It’s approached by a long barbican and was clearly designed to keep out unwelcome visitors.  Above the vaulted gateway are two substantial chambers, one above the other, and a warren of corridors and chambers, some of which would have been lavatories.  The roofline is shorn of its battlements, but the front still contains a number of lifesized statues.

This was the frontispiece of a powerful and influential institution.  When Thornton Abbey was dissolved in 1539 it was worth £591 0s 2¾d.

Yet when you walk through the gateway, there is little but fields to see.  The abbey church, of which only the foundations now remain, was 282 feet long.  All that remains is a section of the cloister and domestic range, with two splendid bays of the octagonal chapter house.  That tells us that this place was as impressive as the greatest surviving abbey ruins in England.

The church and most of the other structures had gone by the early seventeenth century, demolished by Sir Vincent Skinner, who “built a most stately house out of the same, on the west side of the abbey plot within the moat, which hall, when it was finished, fell quite down to the bare ground without any visible cause”.

Thornton Abbey is an English Heritage property and is regularly open:  http://www.english-heritage.org.uk/daysout/properties/thornton-abbey-and-gatehouse.  Unusually, it has its own railway station with a regular two-hourly service from Cleethorpes:  http://en.wikipedia.org/wiki/Thornton_Abbey_railway_station.