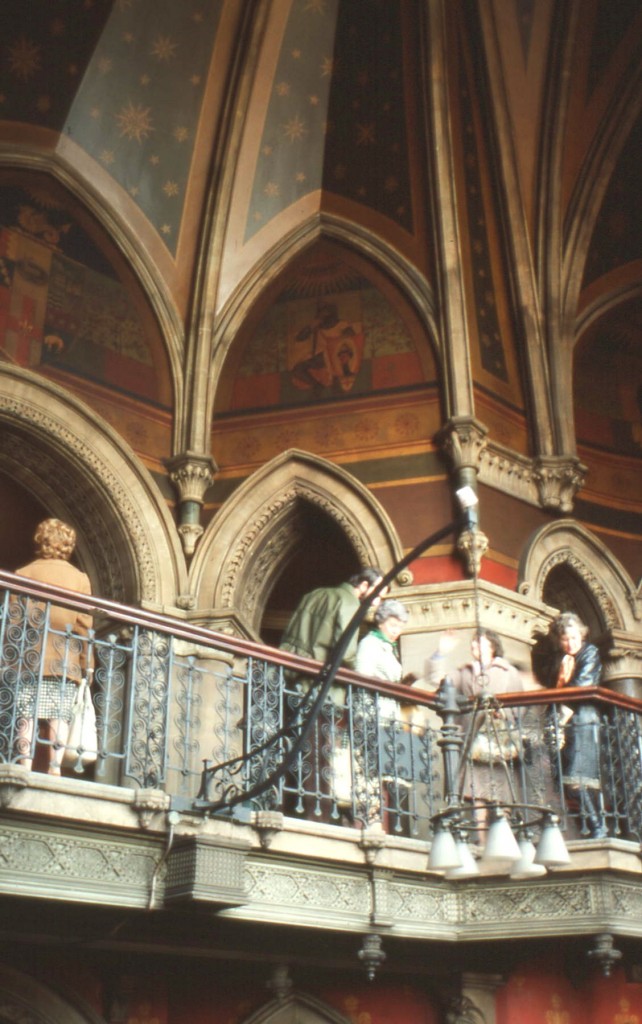 George Gilbert Scott’s Midland Grand Hotel was once the finest place to stay in London but from 1935, when it was converted to railway offices, it stood neglected and increasingly dirty, and in the 1960s it narrowly escaped demolition.

I first knew it well in the 1970s when I brought adult-education groups from the north Midlands to visit sites in London by rail.  I had a deal with a British Rail group-travel organiser I won’t name (even though he’s deceased), whereby if I took the group round the back of the old hotel and presented the man who answered the door with a brown envelope we more or less had the run of the building.

At that time the lower floors were offices for the British Rail catering division, Travellers’ Fare, and the upper storeys had only recently been vacated by restaurant-car crews who had used them as sleeping accommodation on overnight turns.

We would climb to the top of the building in the ancient lift and tramp on to the roof above Euston Road, noticing that each chimney-stack was numbered to assist the chimney sweeps.  We went inside the clock tower to admire the clock.

And we enjoyed the astonishing three-storey main staircase under its Gothic vault painted with stars.  The first time we went the original fitted carpet was still in position, with the faded patch where the German band positioned their harmonium until they abruptly departed in 1914.

In the reception area we wondered at the bracket clock, still being wound weekly by a clockmaker whose contract had not been cancelled in 1935.

The offices closed in 1988 when British Rail was refused renewal of the fire certificate.  Although the exterior was cleaned and restored in the 1990s, finding a use for an obstinately sturdy Grade I listed building took time, and was eventually kick-started by the decision to adapt the under-used station for Eurostar.

At last the building has come back to life.  The upper storeys of the original hotel are converted into luxury apartments by the Manhattan Loft Corporation, and the remainder, with a new, sympathetically designed extension on Midland Road, is a Marriott Renaissance Hotel which opened in 2011.