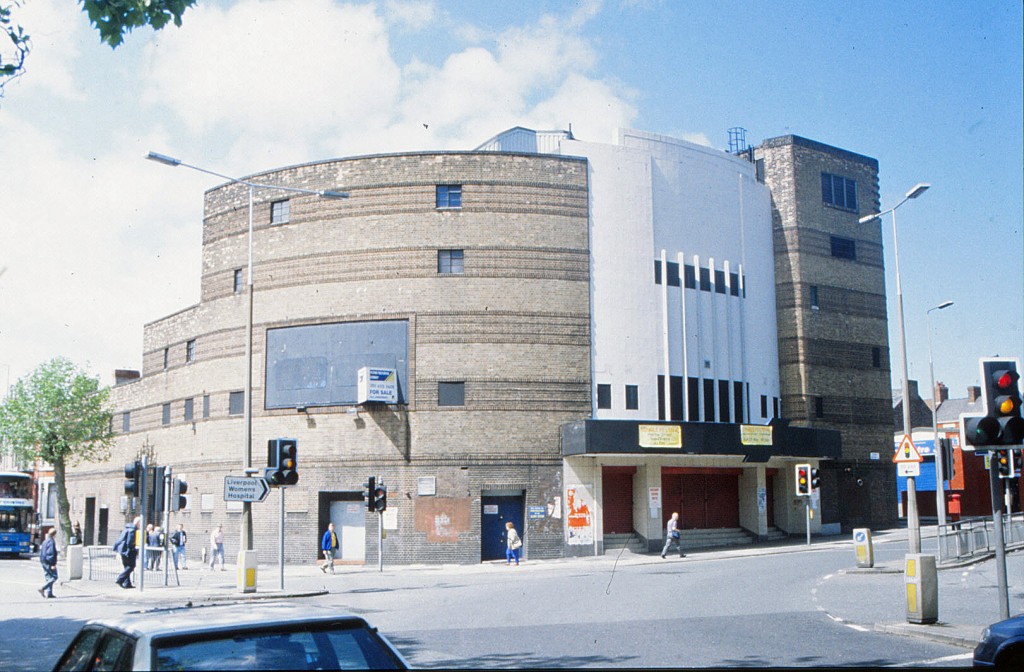 The Cinema Theatre Association Bulletin (September/October 2010) alerted me to activity at the Gaumont Cinema, Dingle, Liverpool – a huge Art Deco pile on the corner of Park Road and Dingle Lane that I’ve been driving past for years without ever having a chance to look inside.

It was designed by the Gaumont house-architect, W E Trent, assisted by Daniel Mackay, as a replacement for an earlier, smaller cinema called the Picturedrome.  It opened on Easter Monday 1937, seating 1,503, with a second-hand Wurlitzer organ (now in the care of the Lancastrian Theatre Organ Trust:  [http://www.voxlancastria.org.uk/heritage]) transferred from the Trocadero Cinema, Liverpool.

W E Trent excelled at simple, sweeping architectural effects, so the exterior has a vertically-banded centrepiece, originally neon-lit, and horizontal bands of stone and brick, curving round the street corner;  the interior is a calm essay in moderne stripped classical features intended to be highlighted by concealed lighting, probably with a range of colour-changes.  Small-scale live shows were provided for:  the proscenium is 45 feet wide, the stage 15 feet deep and there are four dressing rooms.

It operated as a cinema until 1966, and then became a Top Rank bingo-club until 1998.  Thereafter it stood empty until it was taken over for redevelopment as a cultural centre despite attacks from local vandals [http://www.liverpoolecho.co.uk/liverpool-news/local-news/2009/02/28/owners-hope-to-restore-former-gaumot-art-deco-cinema-in-liverpool-s-dingle-100252-23030627].

The Dingle Gaumont attracts more than vandals:  it has a reputation as the most haunted cinema for miles around.  The CTA Bulletin led me to a TV series I wouldn’t otherwise have come across, Most Haunted, with an over-the-top production-style that will strike viewers as gripping or hilarious depending on their views about the supernatural:  http://www.youtube.com/watch?v=8N08jo7kNqo&feature=fvw.  (More relaxed views of the interior can be found at http://www.urbexforums.co.uk/showthread.php/6799-Former-Gaumont-Cinema-Dingle-Liverpool-June-09.)

Because of its status as “one of the most haunted locations in the North West” it has now become a venue for ghost-hunters:  http://www.britevents.com/whats-on/merseyside/dingle/gaumont-cinema/74823.  Tickets cost £49, and you need to bring your own sandwiches.

Bingo kept the place going for decades.  It’s good to see a new way of gaining income from an old cinema.  And it’s an excellent way of deterring the vandals.

Images from a November 2011 urban explorer’s visit are at http://www.28dayslater.co.uk/forums/showthread.php/66021-Gaumont-Cinema-Dingle-Liverpool-November-2011.

Excellent undated images are at http://urbanliverpool.blogspot.co.uk/p/gaumont-cinema-dingle.html.