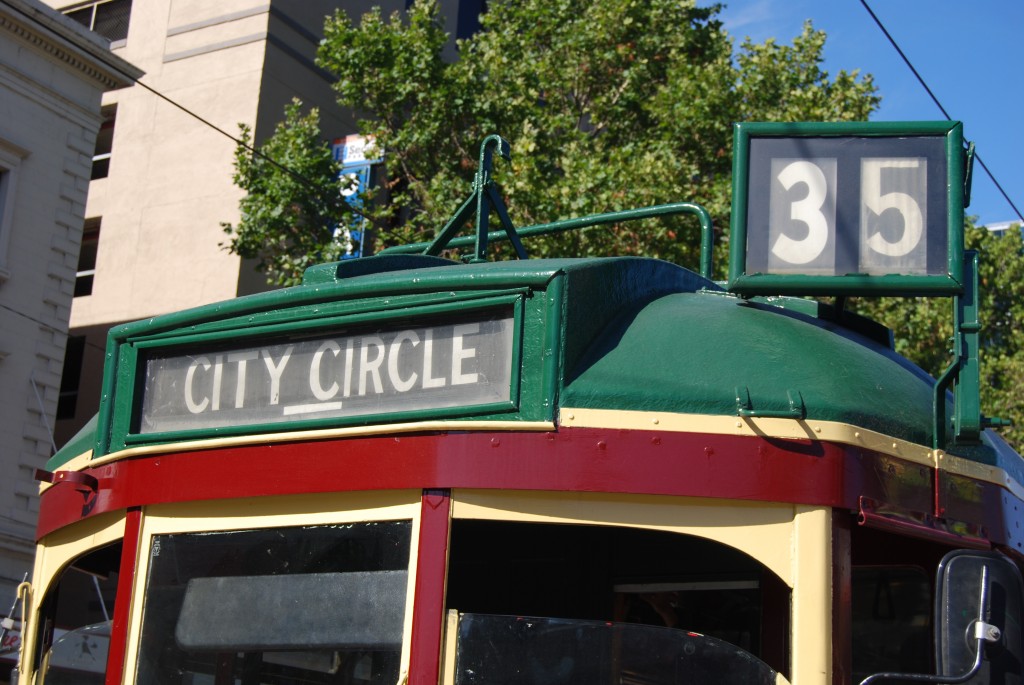 Melbourne largely moves on steel wheels on steel rails.  It’s certainly the only city in Australia, and arguably one of the few in the world, which still runs a complete, traditional street tramway system.  This isn’t an isolated route with heritage overtones, like Blackpool or Adelaide, or even a vestige like Boston or Rome;  this is a full-on, in-yer-face tram system, with 27 routes covering most of the city, running single-deck vehicles of different dates and sizes up to the very latest 21st-century sophisticated models, operating with very cheap fares and some free travel.  Buses, I eventually noticed, are a rarity.

The suburban rail system is also ubiquitous.  There are some places in the city-centre (which the locals call the Central Business District, or CBD, rather like Chicago’s Loop) where it’s possible – with trams screeching round tight curves and trains rumbling overhead on viaducts – to imagine you’re sitting in the midst of someone’s gigantic train set.  There is even a compact version of London’s Circle Line, circumambulating the CBD sub-surface between five stations.

On Sunday I could travel the entire network – trams, trains and buses if I could find any – for the price of a Sunday Saver ticket, A$3.10 [less than £2];  on Monday the same facility for Zone 1, which extends as far as a visitor would reasonably need, cost A$6.80 [around £4.25].  Notices on the trams and tram stops showed that Christmas Day travel was free of charge, and on New Year’s Eve trams ran throughout the night until the New Year’s Day timetable began.

One consequence of the plethora of tram tracks is that Melbourne motorists perform a manoeuvre called a “hook turn” to ensure trams have priority at green lights.  To turn right at a tramway crossing (the Australians drive on the left), it’s necessary to move into the left-hand lane on the crossing, wait until all traffic has passed by and then make a tight right turn just as the lights change.  I repeatedly saw this operation completed with skill and grace, but I think I’d be a wimp and take three left turns round the block rather than put myself in such a situation.

The ideal way to orientate in Melbourne is by means of the free circular tram service which circumscribes the CBD, following almost exactly the route of the underground line, with a dogleg spur to the Waterfront City on the redeveloped Docklands.  This is operated by distinctive heritage trams, rugged streetcars with an American appearance.  There is a recorded commentary and, unlike visitor tours in many places, trams run in both directions so it’s easy to hop backwards and forwards between sites.

The CBD is an elongated oblong:  it’s a comfortable stroll across the short axis, but quite a tramp along the long axis from Southern Cross Station to the Parliament House.  The City Circle tram, with its commentary, makes it much easier to visit the city-centre sites, such as the Parliament House of Victoria, the Old Treasury (now the City Museum), the Old Melbourne Gaol and the Victorian Arts Centre.  I used it to visit Melbourne’s cathedrals, both impressive, the Anglican St Paul’s and the Roman Catholic St Patrick’s.

The only place I ate in Melbourne CBD was a delight.  Federici [www.marrinertheatres.com.au] is attached to the Princess Theatre, opposite the Parliament House, and offers bistro-style food at all hours.  I missed the opportunity to see Jersey Boys at the Princess, because I had a prior engagement with the Colonial Tramcar Restaurant.