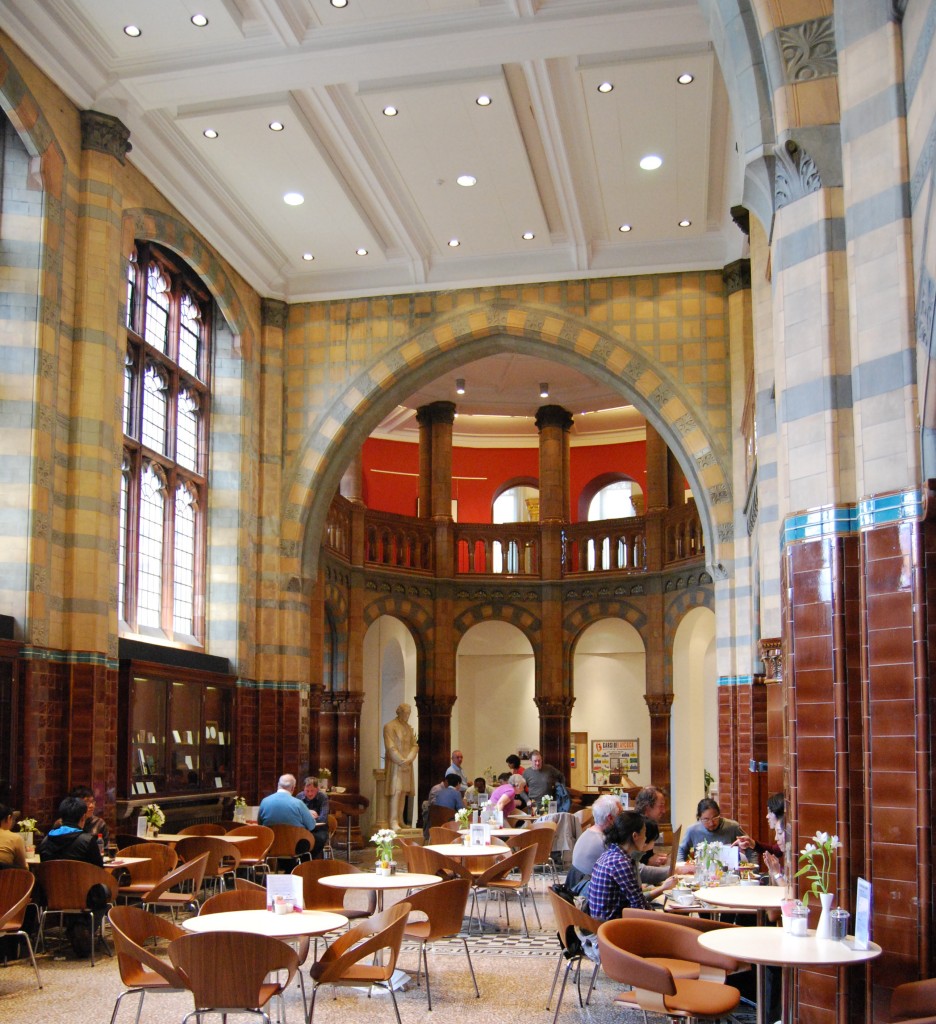 The expression “red-brick university” stems from the great Victorian Liverpool-born Quaker architect, Alfred Waterhouse (1830-1905), and his love for terra-cotta, glazed moulded brick, with which it is possible to contrive elaborate effects without the great expense of masons and masonry.

The term was actually coined by Liverpool University’s Professor of Hispanic Studies, Edgar Allison Peers (1891-1952) in his polemic, Red Brick University, published under the pseudonym Bruce Truscot in 1943.

Waterhouse is responsible for, among much else, Manchester Town Hall, the Refuge Assurance Building in Manchester that is now the Principal Hotel, the Natural History Museum, South Kensington and a series of unmistakable office-buildings for the Prudential Assurance Company.  His predilection for terra-cotta led his architectural contemporaries sarcastically to label his work “slaughterhouse Gothic”.

His influence on the competition for the Victoria Law Courts, Birmingham, which were eventually built by Aston Webb & Ingress Bell, undoubtedly encouraged Birmingham to become “terracotta city” in the Edwardian period.

In his native Liverpool, Waterhouse built (in stone) the former North Western Hotel in front of Lime Street Station, and the iconic Victoria Building of Liverpool University (1892).  This was conceived as part of an 1880s federation of University College, Liverpool, Owens College in Manchester and the Yorkshire College in Leeds, which split up when first Liverpool and then Leeds gained independent university status in 1903 and 1904.

Many of the architectural interesting parts of the Victoria Building are now open to the public as the Victoria Gallery & Museum, and the interior is an eye-opening.  Rather than the lavatorial reds that one might expect, Waterhouse used an interesting palette of buff and pale green faience.  Staircases weave through the building, supplemented by an ingeniously inserted modern lift.  The Tate Hall, formerly the library funded by the great sugar baron, has a spectacular timber roof.

It’s well worth a visit.  Admission is free.  The displays feature aspects of the University’s work since its foundation in 1887.  And it’s a welcome addition to Liverpool’s superb range of places to have morning coffee or afternoon tea. See http://www.liv.ac.uk/vgm.