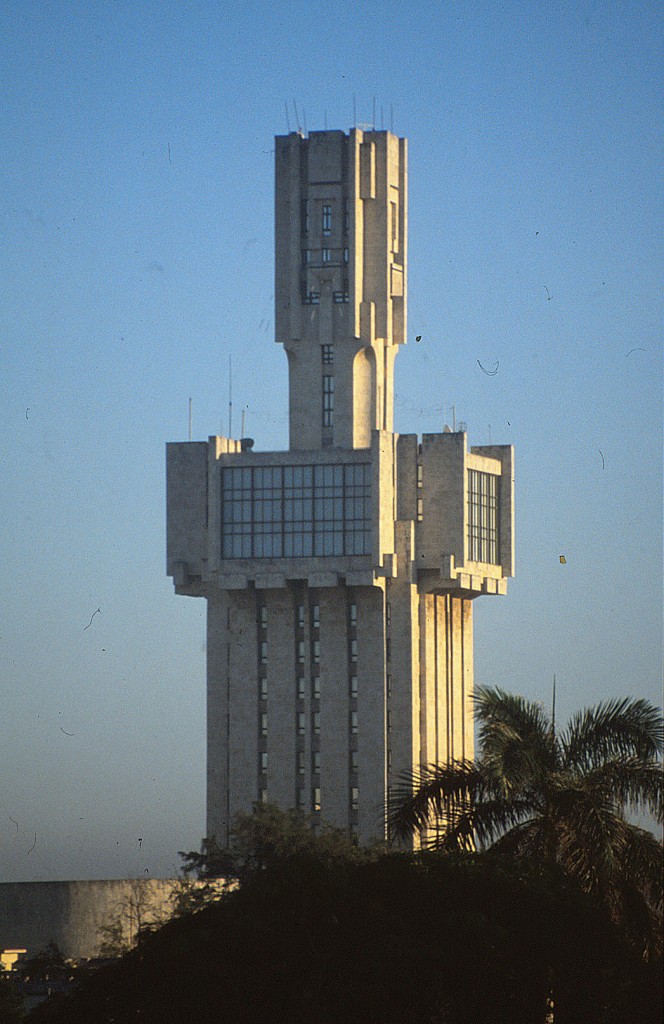 I simply don’t get brutalist architecture.  I’m sometimes embarrassed, as a paid-up member, when the Twentieth Century Society campaigns for a concrete edifice that I’d cheerfully blow up, but there are uncompromising, exciting, post-war concrete buildings that I would miss if they were removed.

Perhaps the most startling post-war building I’ve ever seen is the Russian Embassy in Havana (originally, of course, the Soviet Embassy).

Designed by Aleksandr Rochegov and built between 1978 and 1987, it stands on the Quinta Avenida, or Fifth Avenue, in the Miramar district which was, before the Cuban Revolution, the prestigious residential district of the nation’s capital.

There is very little information on the web about this epic piece of concrete, with its gaunt tower protruding above the trees.

It’s described as constructivist, rather than brutalist, in style.  To me, in my ignorance, the distinction is academic, though students of modern architecture would recognise the two as entirely different concepts.

The most coherent example of constructivism I’ve come across, but not yet seen, is the Shukhov Tower in Moscow (1920-1922):  https://en.wikipedia.org/wiki/Shukhov_Tower.

Yet the Russian Embassy in Havana is so unremittingly ugly that I rather like it.

And I’d be sorry to see it go, because it represents a layer in the palimpsest of Cuban architecture, along with the Spanish and American buildings that populate the island representing the stages in its history. 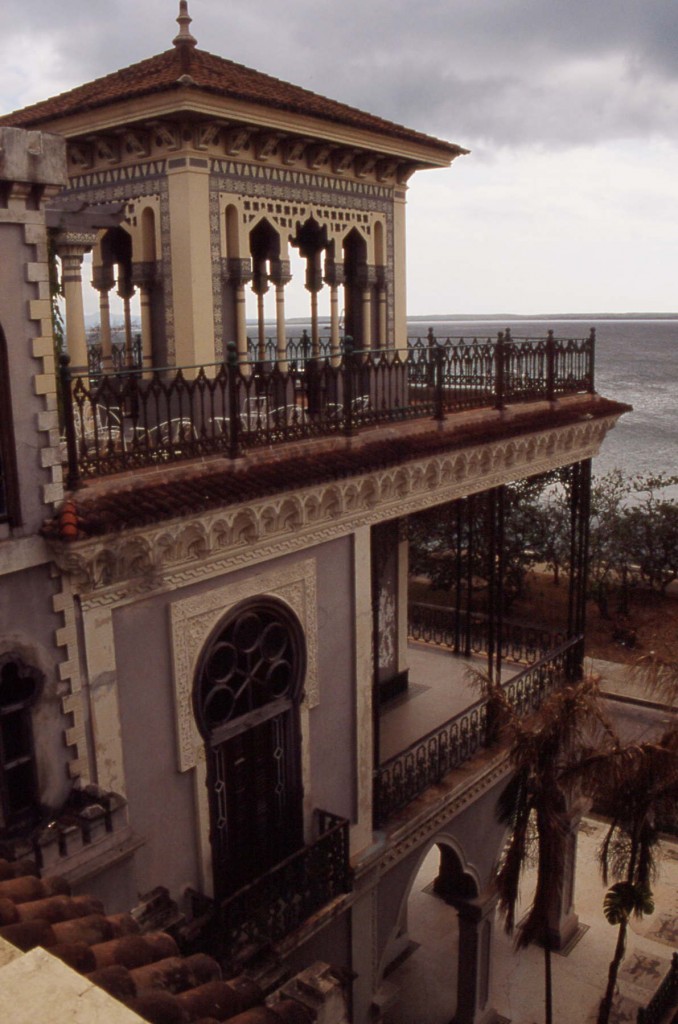 When I spent Christmas in Cuba in 2001, the most eccentric building I visited was the Palacio de Valle in Cienfuegos on the south coast:  http://www.cubaheadlines.com/2009/03/14/16253/palacio_de_valle_monument_cienfuegos_cuba.html.

Built for a wealthy sugar merchant Oclico or Acisclo del Valle y Blanco as a wedding-gift from his father-in-law, it was designed by an unnamed local architect, possibly Pablo Carbonell Donato, and constructed by Alfredo Colli Fanconetti, an Italian civil engineer.  Begun in 1913, it was completed in 1917 at a cost of 1½ million pesos.

It’s an astonishing mixture of materials  and styles– marble, alabaster, brass, glass and faience.  The dining room is in the Mudéjar (Andalucian) style, based on the Patio of the Lions in the Alhambra.  The music room is Louis XV.  The three rooftop turrets are respectively gothic, Indian and Moorish, respectively symbolising war, love and religion.

Del Valle died in 1920, and his widow and children left the place a couple of years later.  After passing through a succession of ownerships it was converted by Panchin Batista, brother of the dictator, to a casino in 1950.

After the Revolution it became an art school and is now a restaurant.  When I visited, some years ago, a lady whom our guide described as a “character” played a grand piano very loudly all through the meal.

There’s so much to see and enjoy in Cuba, but in the time I spent there I saw nowhere more memorably unusual than the Palacio de Valle.