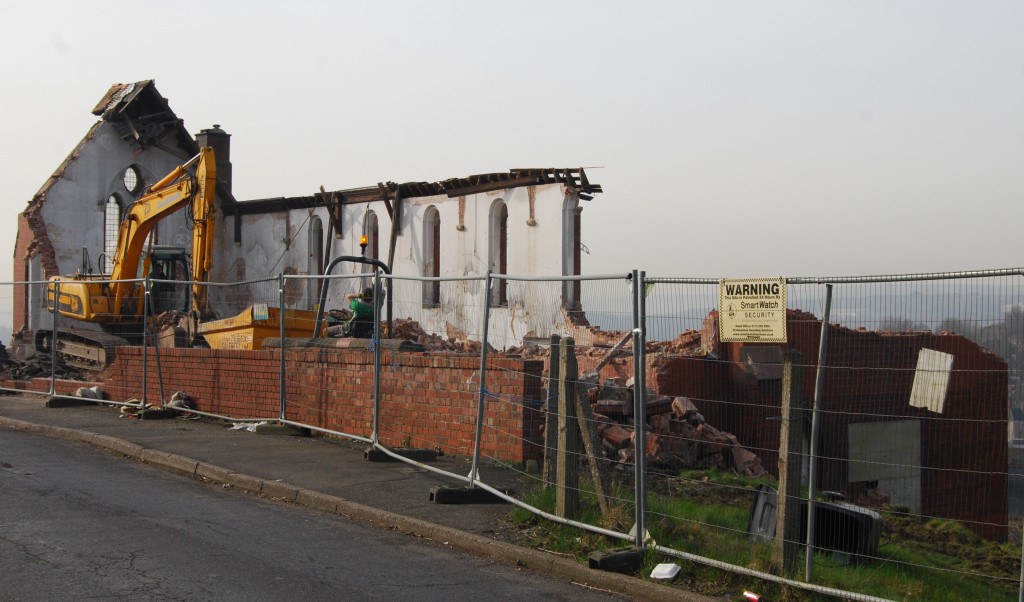 No sooner had I posted a blog-article complaining that St Hilda’s Church, Shiregreen, Sheffield had stood a roofless ruin for six months than the demolition team moved in.

Within a week, March 10th-14th 2014, the building was flattened – an eyesore that need never have been an eyesore.

The earliest reference I’ve so far found to the possibility of  closure is in 1993.  As late as 2004, Ruth Harman and John Minnis clearly thought it merited an illustration in their Pevsner  Architectural Guide Sheffield (2004), p 188.

By the time I became aware it was threatened and my neighbours started a campaign to save it at the end of 2011 it was far too late to have any effect.

This is what I’ve learned from following the fate of St Hilda’s Church:

It was always on the cards that St Hilda’s would go.

One less twentieth-century suburban church makes the others that remain marginally more valuable. 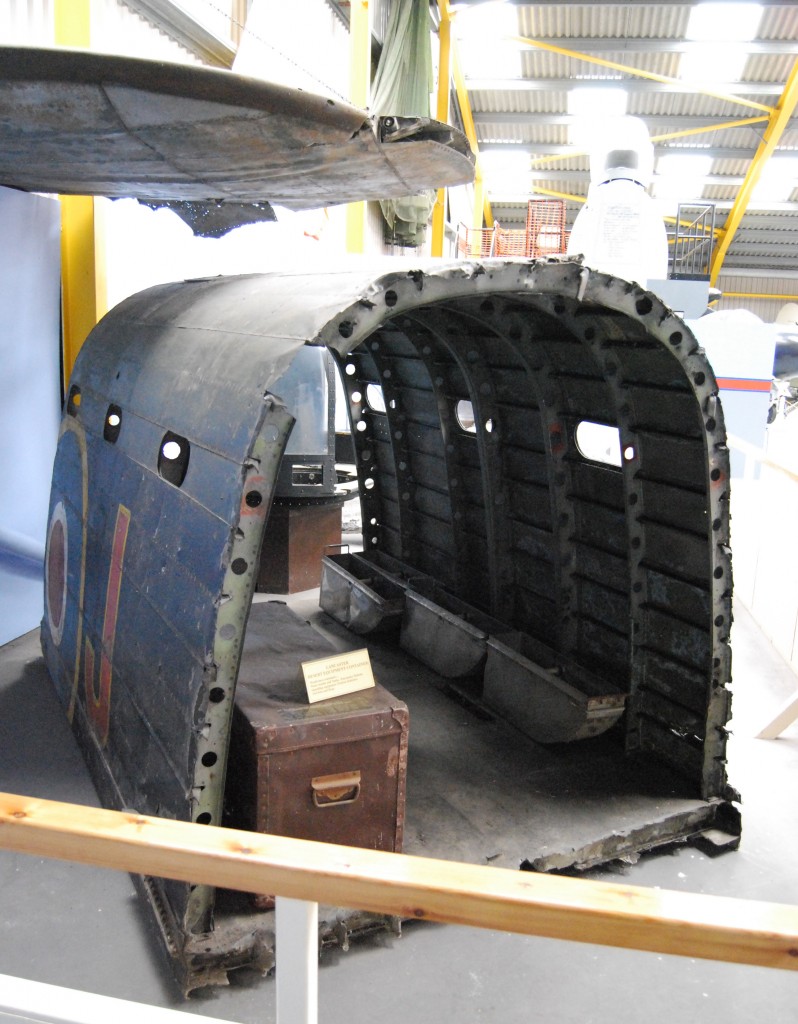 One of the most poignant exhibits at the Newark Air Museum is the wingtip of a Lancaster bomber, R5726, which was fished out of Knipton Reservoir, near Melton Mowbray, Leicestershire.

It broke up in the air in bad weather on the afternoon of April 4th 1944, killing the crew of seven, and was found by Newark Sub-Aqua Club in 1979.

Next to it is a short section of the fuselage of another Lancaster Mk I, W4964, which flew 106 missions, one of them part of Operation Catechism, the final attack on the German battleship, Tirpitz, on November 12th 1944.

When this aircraft was retired its fuselage was used for ground training, and eventually a sawn-off section became a garden shed in Gainsborough, from where it was rescued for preservation in 1974.

Its wartime paintwork remains intact.  The accompanying display shows a photograph of its crew returning from its first sortie to Stettin in 1943, with the plane’s insignia in the background.

Also on display is one of Barnes Wallis’ bouncing bombs, properly an Upkeep Mine:  this one was a test version dropped in a practice run at Reculver, Kent.

It’s one thing to see a historic relic, whether a plane or a train or a building, fully restored as new, but it’s a far more resonant experience to see actual artefacts unchanged from the time of the story that they tell.

The most endearing aircraft in the Newark Air Museum is the prototype Taylor JT1 Monoplane, G-APRT, designed in 1956 and built in Ilford in 1958-9 by Mr John F Taylor.

He specified that it had be within the capabilities of a do-it-yourself constructor, fabricated entirely of wood, and originally cost less than £100.  Its wingspan was restricted to sixteen feet, because that was the size of the lounge in his apartment.  Even so, extricating the finished plane involved removing the bay-window and sliding it down ramps from first-floor to ground level.

I imagine John Taylor’s family were glad to get it – and him – out of the house. 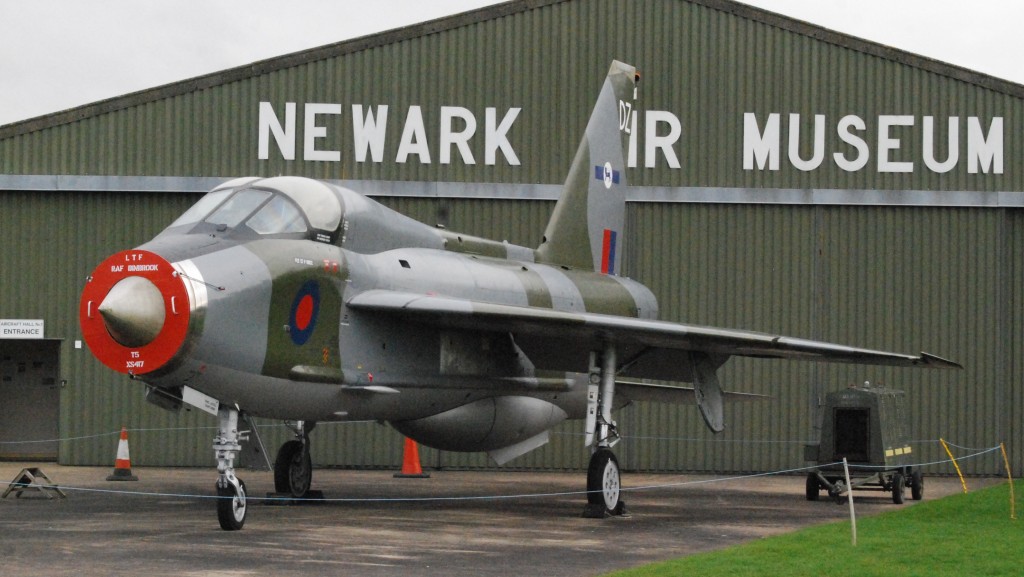 I know very little about aircraft.

I was brought up alert to steel wheels on steel rails.  I was taught to read, write and count by watching the trams go past the house in post-war Sheffield.  My dad took me trainspotting on Sunday mornings while my mum cooked lunch (which we called dinner).

I still think numbers look best in sans-serif, as they were on the front of most Sheffield trams and buses and on the cab-sides of British Railways locomotives.  And though roller-blind destination indicators are on their way out, if I see a driver scrolling to change his display I have to stand and watch the succession of place-names.

My mate Richard was brought up on rubber wheels – cars and motorbikes – and seems to have spent his childhood building model planes.

So when he suggested spending a couple of hours at the Newark Air Museum, just off the A1 in Nottinghamshire [http://www.newarkairmuseum.org/index.html], I didn’t expect to learn much.

In fact, it’s a rich, varied and highly professional museum, with excellent interpretation that’s informative for enthusiasts and at the same time intelligible to numpties like me.

We wandered through two vast display halls and a small-objects display hall, inspected a range of aircraft outside, and briefly looked at a collection of aero-engines (to appreciate which you presumably need an engineering degree).

I declined an offer to sit in the cockpit of a Jaguar, knowing that when Dick walked round the corner he’d jump at the chance.  He had at least a vague idea of what all the knobs and dials were for, whereas I’d be like the guy at Crich who asked how you steer a tram.

The Museum runs a rich series of events, ranging from an Aeroboot sales day to a Cockpit-Fest.  There is a comprehensive education programme, particularly for primary schoolchildren, Cubs and Scouts, and Air Training Corps squadrons.

There’s a shop, billed as “the best specialist aviation outlet in the Midlands”, and a small, warm and welcoming café, which for the moment only goes as far as “legendary” toasties and paninis but will in due course branch out in a new building, thanks to ‘Project Panini’ [http://www.newarkairmuseum.org/newsItem.php?id=736].

The site, adjacent to the Newark and Nottinghamshire Agricultural Society showground, was formerly RAF Winthorpe, a Second World War base that operated from September 1940 until July 1959.

The aircrew who flew from there and didn’t come back are commemorated by a poignant memorial which incorporates part of a propeller hub of a MK III Short Stirling, EF186, which was based at RAF Winthorpe and crashed out of control at Breeder Hills near Grantham on December 4th 1944.

In essence, this rich collection of magnificent engineering commemorates the skill and the bravery of those who flew from airfields like this before, during and after the Second World War and their successors who continue to do so. 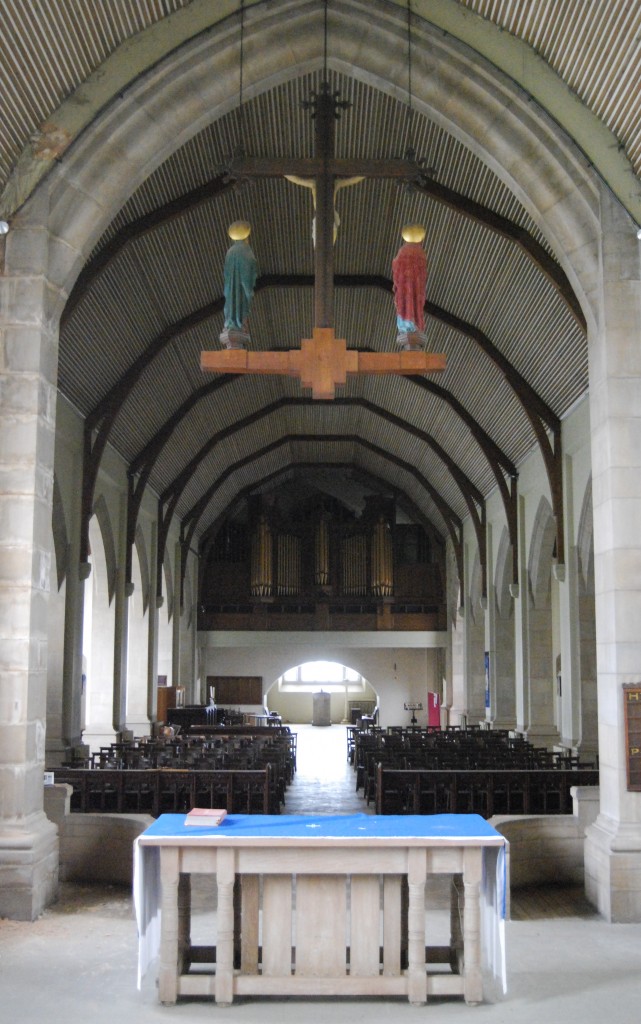 After I’d taken part in the Church Commissioners’ meeting to discuss the redundancy and proposed demolition of St Cecilia’s Church, Parson Cross, Sheffield, I spent some time talking to people in the Parson Cross community about the building’s practical possibilities.

Apparently, there aren’t any.

Local community workers told me that there’s already full provision of community facilities on the Parson Cross and neighbouring Foxhill estates:  a further facility, if it could be financed, would threaten the viability of those already existing.

Public finance is, of course, an impossibility.

One City Councillor told me with understandable passion of the difficulties of maintaining social provision in the face of draconian financial cuts.  One particular priority at present, justifiably, is somehow to maintain a branch library within reach of local residents.

Yet the emotional pull of St Cecilia’s still remains.  A clergyman spoke movingly of how the building holds the prayers of seventy years of congregational worship, and is a monument to the revered Kelham Fathers who built up the parish from nothing.

The one positive insight I heard came from someone with enterprise experience:  “The only hope for that building,” he said, “is serendipity.”

That, after all, is what happened at Gorton Monastery in Manchester, the Abbeydale Cinema on the south side of Sheffield, and the former St Thomas’ Church, Brightside, which is now Greentop Circus.

The Gorton Monastery project was co-founded by Elaine Griffiths, MBE;  the Abbeydale Cinema turned a corner when Phil Robins spotted its possibilities as a climbing centre;  the founders of Greentop Circus had the wit to challenge Anneka Rice.

In other words, the only possibility of finding a use for the building is if someone comes along with a practical idea that no-one else has thought of.

The only way of saving St Cecilia’s is for someone who needs an attractive space on the north side of Sheffield to come up with a business plan that relieves the Church Commissioners of the need to spend nearly £200,000 knocking the place down brick by brick to the great inconvenience of the neighbours. 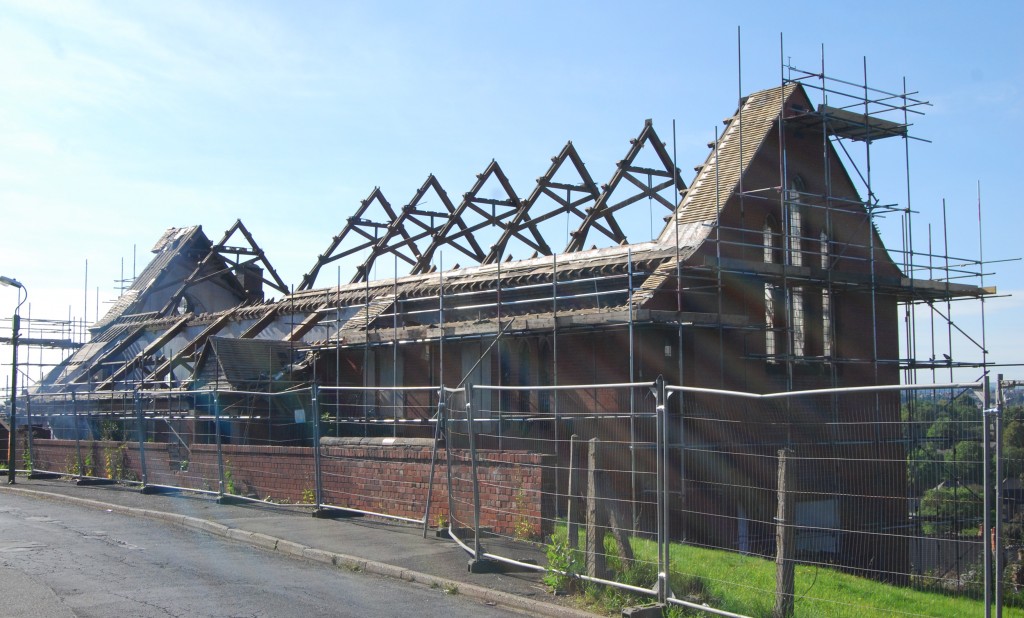 Last August the scaffolding went up around St Hilda’s Church, Shiregreen, Sheffield, and it was apparent that it would be demolished.

I was told that the schedule was to have the site cleared by the end of September 2013.

A cheerful crew duly turned up and over a matter of two or three weeks removed the entire roof.

Then they went away, and nothing further has happened.

The place continues to stand a roofless ruin.

My diocesan source tells me that the delay results from “discussion between the Sheffield City Council Planning Department, Church Commissioners, Diocese and the Contractor”.

The Church authorities don’t seem to have much luck either with keeping redundant buildings standing or knocking them down.

St Hilda’s is now neither one thing nor the other.

It’s perhaps mischievous to point out that roofless churches have been preserved against all the odds, such as the Welsh Presbyterian Church, Toxteth, Liverpool [http://www.liverpoolecho.co.uk/news/liverpool-news/toxteths-welsh-presbyterian-church-new-6086259] and the Welsh Baptist Chapel, Upper Brook Street, Manchester  [http://www.victoriansociety.org.uk/news/the-unitarianchapel-upper-brook-street-manchester].

Both these examples are listed, and are of undeniable historical and architectural merit.

But sometimes even the most unassuming derelict buildings gain a purpose that keeps them standing and restored to good order:  http://www.mikehigginbottominterestingtimes.co.uk/?p=1461.

Update – March 11th 2014:  The interrupted demolition of St Hilda’s has resumed, and it should be gone within a matter of days. 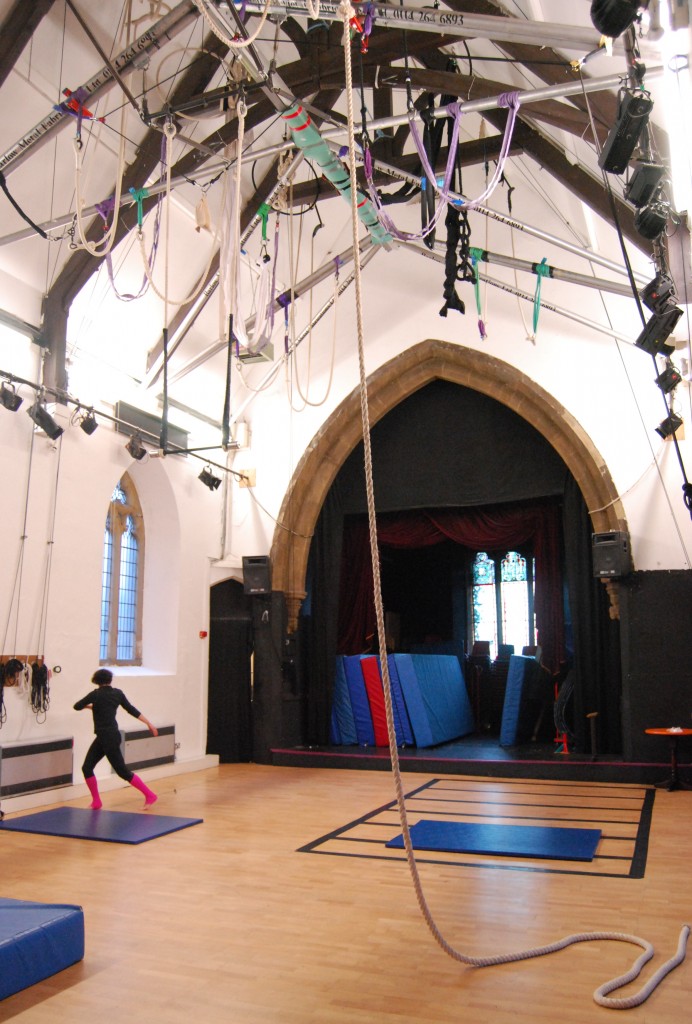 Because of the discussions about the future of the redundant St Cecilia’s Church, Parson Cross, Sheffield, I’m looking at examples of successful conversions of redundant religious buildings which have preserved the architecture while enabling the building to earn its keep.

One of the best examples I’ve come across is the former St Thomas’ Church, Brightside, Sheffield, a modest Victorian parish church of 1854 by the local architects Flockton & Son, built to serve the first growth of artisan housing as the steelworks crept across the Lower Don Valley after the arrival of the railway in 1839.

It’s a more modest building than Flockton & Son’s contemporaneous work in Sheffield – the General Cemetery Church and Christ Church, Pitsmoor (both 1850), and St Matthew’s, Carver Street (1855) – but it is, as the cliché goes, small and perfectly formed, with a nave and chancel, a south aisle but no north aisle, a bell-tower and spire.  The architects’ plans are online at
http://www.churchplansonline.org/show_full_image.asp?resource_id=04465.tif  and http://www.churchplansonline.org/show_full_image.asp?resource_id=04465a.tif

It was listed Grade II in 1973 and made redundant in 1979.  At first it was converted as a gymnasium for the Sheffield School of Gymnastics but then fell into neglect.

Apart from a shortage of storage-space, the interior is ideal for its present purpose.  The trapeze rig sits comfortably on the load-bearing walls of the nave;  there is ample height and floor-area and cramped but well-organised office-space in the west gallery, accessible by an intriguing spiral staircase in the tower.

Greentop is an arts education charity which provides, alongside training facilities for professional performers, school workshops and team-building for adults as part of its mission “to use contemporary circus skills to enhance people’s lives and inspire positive change”.

When I met a committee of the Church Commissioners to discuss the proposal to demolish St Cecilia’s, I was asked if there weren’t already enough community facilities on the Parson Cross estate.  I replied that if the existing six buildings were sufficient support for the local community, the area would not figure so high on indices of deprivation.

Greentop’s value to the local Firvale community is incalculable.  Some of the young people who have become involved are from the local Roma community, who have had a famously bad press recently:
http://www.telegraph.co.uk/news/uknews/immigration/10452130/Roma-in-Sheffield-When-it-goes-off-it-will-be-like-an-atom-bomb-here.html.

And without Greentop, the consecrated churchyard of St Thomas would contain only graves and a wreck or an empty space.