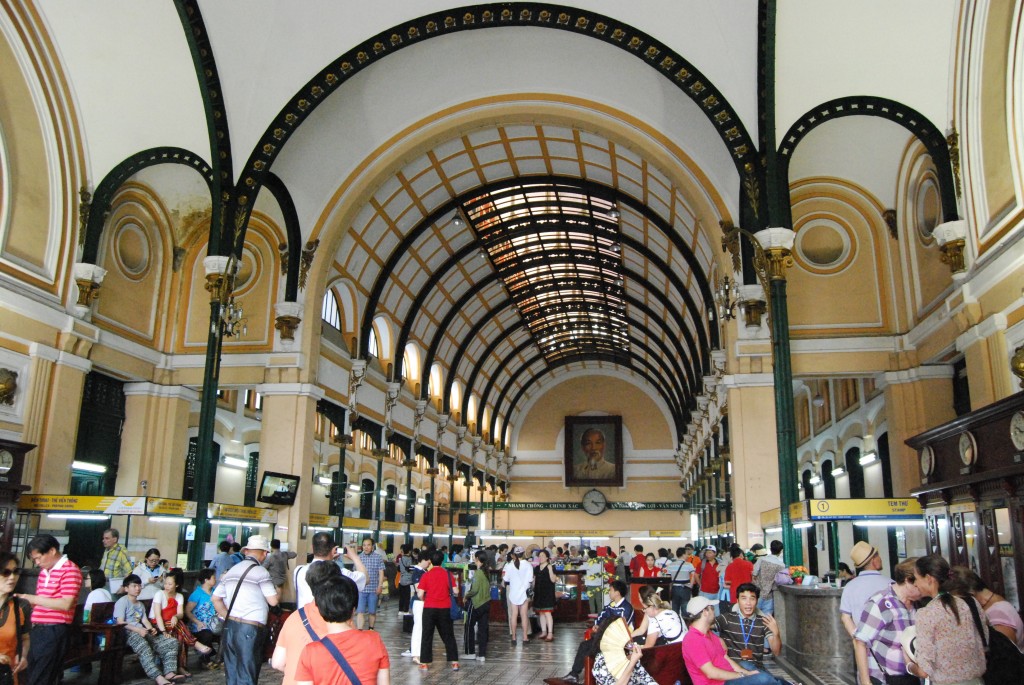 It was designed, for all the world like an iron-roofed railway station, by Gustave Eiffel (1832-1923) in the same period that he was working on his eponymous Tour d’Eiffel in Paris.

This huge and busy Victorian relic offers all the expected post-office services, and some a visitor might not expect, such as pots of glue to deal with Vietnam’s non-adhesive postage stamps:  http://www.loupiote.com/photos/3140179341.shtml.

On my brief visit I missed Duong Van Ngo, the old gentleman in the post office who, well into his eighties, pens beautiful calligraphy for people who want to send important letters, such as business deals and proposals of marriage:  http://www.spiegel.de/international/spiegel/the-man-who-writes-love-letters-a-day-with-saigon-s-last-public-letter-writer-a-470114.html. 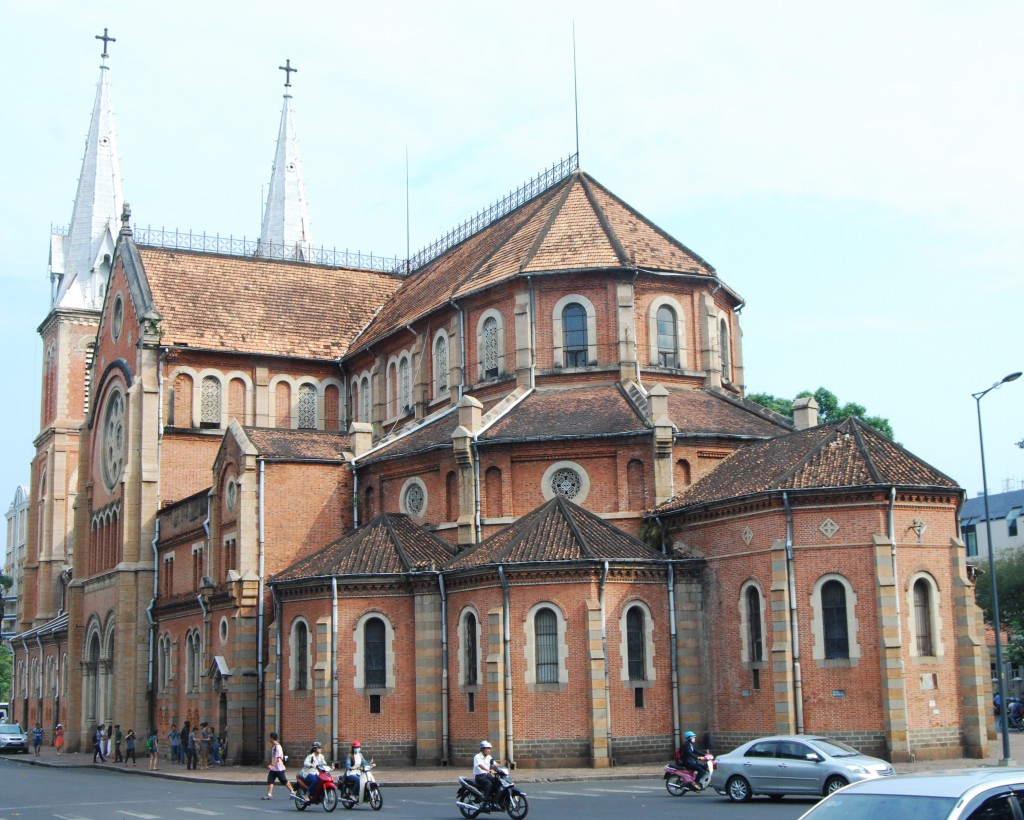 Of all the interesting places I visited in Vietnam with Great Rail Journeys’ ‘Vietnam, Cambodia & the Mekong Delta’ tour, I’m most likely to return to Saigon, perhaps as a stopover en route to Australia or New Zealand.

Our local guide was at pains to point out that the official name Hồ Chí Minh City is a formality which can lead to embarrassment, when disparaging the city insults the political leader, and so Saigon [Sài Gòn] is the customary name to use.

Across Vietnam I repeatedly spotted unmistakably Gothic churches which must reflect the French colonisation, but the only one I had the opportunity to visit, very briefly, was the Basilica of Notre-Dame in the centre of Saigon.

Constructed entirely of French materials in a weird combination of Byzantine and Gothic styles from 1877 to 1880, the basilica’s Marseilles bricks and twin spires suggest a jazzed-up version of A W N Pugin’s Cathedral of St Chad, Birmingham.

The towers were in fact additional, built to contain six bronze bells each in 1895. To the tips of the crosses, each tower is 60.5 metres high. At the time of construction these were the tallest structures in Saigon.

Though Christianity is a minority religion in Vietnam, Notre Dame is heavily used. It has survived so many wars and upheavals, and remains a focal point in the city. 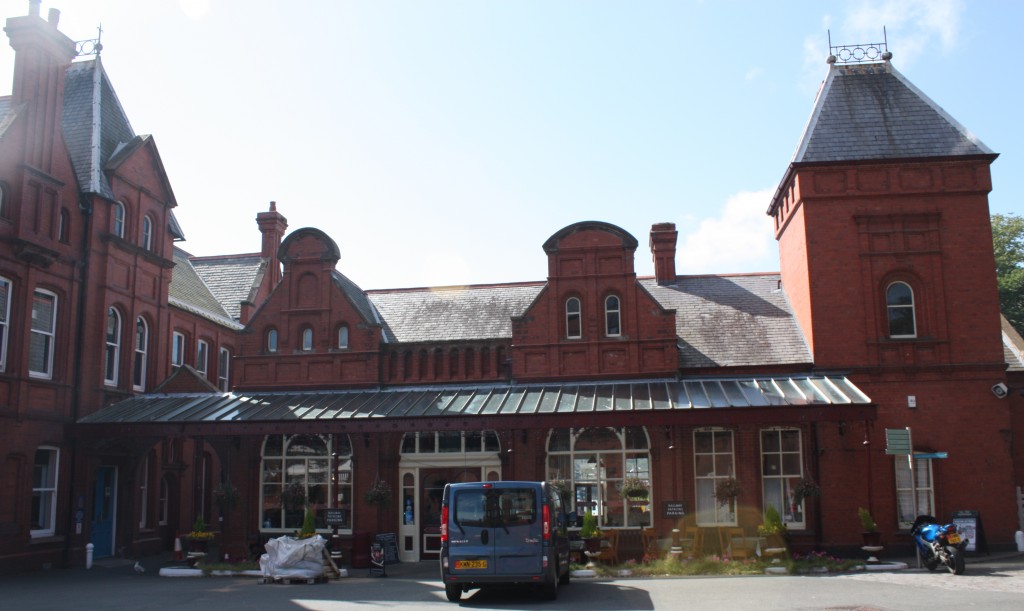 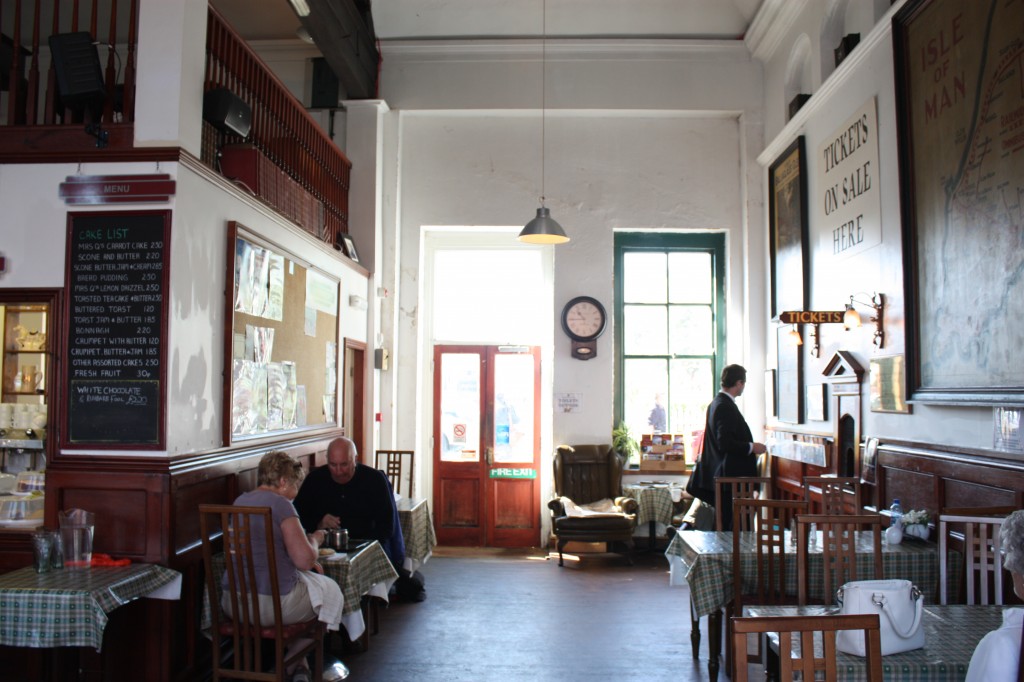 The Isle of Man Railway terminus station at Douglas is not what it once was.

Until it was drastically rationalised in 1979-80, the Manx capital’s station had the air of an important terminus, with two island platforms covered by iron canopies. The ironwork was removed, and one platform, the goods yard and a carriage shed were cleared to make way for a bus depot.

The grand headquarters building, built in Ruabon brick in 1887, survives as one of the finer Victorian buildings in Douglas.

A proposal to redevelop the station, ostensibly “to make the building commercially viable to ensure its future preservation”, has produced a chorus of protest from Manx people [http://www.iomtoday.co.im/news/business/it-s-all-change-for-victorian-station-1-6781032#comments-area], but it hasn’t yet caught the attention of people in the UK who admire Victorian buildings and love the Isle of Man.

The proposal talks of removing floors, ceilings and partitions, and inserting a mezzanine to accommodate an enlarged restaurant and a retail outlet, and to provide a glazed ‘al fresco dining area’.

The 1984 entry in the Manx Protected Buildings Register offers almost no protection to this building, which “is not felt to be a good example of such a Victorian structure”.

Actually, in terms of its magnificence and its significance in transport history, this is the St Pancras of the Isle of Man.

(I call to mind, whenever I visit the real St Pancras, that at one point in the 1960s that magnificent station was within ten days of demolition. After the train-shed and the hotel were listed Grade I in 1967, over thirty years elapsed before anyone found a way of making St Pancras pay its way.)

The Manx listing of the Douglas station pompously remarks, “…there does seem to be a considerable feeling of emotion on the part of the general public directed toward retaining the station intact regardless, and as public servants the authorities must take such views into account.”

Emotion, however genuine, needn’t enter the debate. All this project needs is intelligence, imagination, sensitivity and financial acumen.

There are lots of practical examples in the UK, and a few in the Isle of Man, to prove that the best way to ensure historic buildings contribute to present and future prosperity is by treasuring and nurturing their integrity, by maintaining their intact surviving features, rather than by creating a tacky pastiche to satisfy a developer’s bottom line.

I hope that before Douglas railway station is trashed, Manx politicians – and Manx property developers – will recognise that the smart money lies in conserving the historic environment, not laying it waste.

Update:  In response to rising public concern, the Infrastracture Minister, Phil Gawne MHK, has backtracked on plans to gut or demolish the building:  “If [enthusiast groups] can demonstrate the historical integrity is being undermined by this plan then I am happy to look at this again.” [http://www.iomtoday.co.im/news/isle-of-man-news/taxpayers-cash-for-railway-to-be-cut-1-6830523]

Further update:  Phil Gawne MHK in a recent interview reiterates his willingness to engage in dialogue with railway heritage organisations:  http://www.manx.net/tv/mt-tv/watch/66948/douglas-railway-station?utm_medium=facebook&utm_source=twitterfeed.  The footage provides, for the first time as far as I can tell, images of the proposed alterations and of the current condition of the station forebuilding and the separate clock tower. 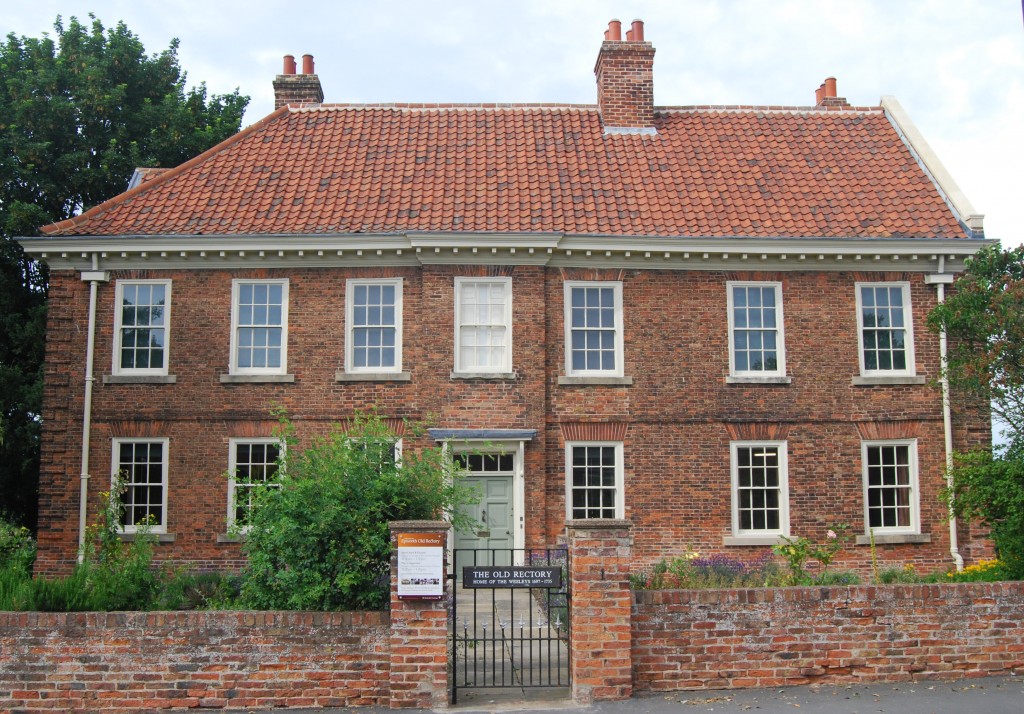 It’s not uncommon to hear American voices in the small North Lincolnshire market town of Epworth.

Indeed, when I visited Epworth Old Rectory with a British friend one summer afternoon, the other visitors, a coach-party of around twenty and a couple on a pilgrimage, were without exception Americans.

Epworth is seen, quite literally, as the birthplace of Methodism, because the rector in the early eighteenth century was the Rev Samuel Wesley (1662-1735) of whose nineteen children three boys and seven girls survived.  The three boys were Samuel the Younger (1690 or 1691-1739), a minor poet, John (1703-1791), cleric and theologian and founder of the Methodist Church, and Charles (1707-1788), the hymn-writer.

Rev Samuel Wesley was not popular in his Epworth living:  he was a high Tory and a high churchman, and didn’t get on with his parishioners.

The existing parsonage was burnt down in 1709, a particularly alarming incident in which his son John, known within the family as Jacky, was trapped in a second-floor bedroom and rescued only with difficulty.

Had he perished, there would have been no Methodist church as such.

The Wesley children’s upbringing was meticulous.  Their mother Susanna educated the boys and girls to the same level, and found time to teach each of the ten individually on a weekly basis.

This methodical approach to mundane as well as intellectual tasks was distinctive of John Wesley’s university life, and led him and his friends to be scornfully labelled “methodists”, an epithet which they joyfully accepted.

Throughout his long life of preaching, John Wesley encountered furious opposition from clergy of the Established Church, not least in Epworth where, on return visits to his birthplace, he was denied access to the parish church and took to standing on his father’s grave to preach.

“Consumed by the thought of the shortness of time, the great work to be done, and the need for haste in doing it, on he marched, preaching, pleading, warning and guiding…” until, by the time of his death, he had unwittingly created an alternative Protestant church to Anglicanism.

And that is why visitors come from all over the world to an elegant Georgian parsonage in North Lincolnshire:  http://www.epwortholdrectory.org.uk. 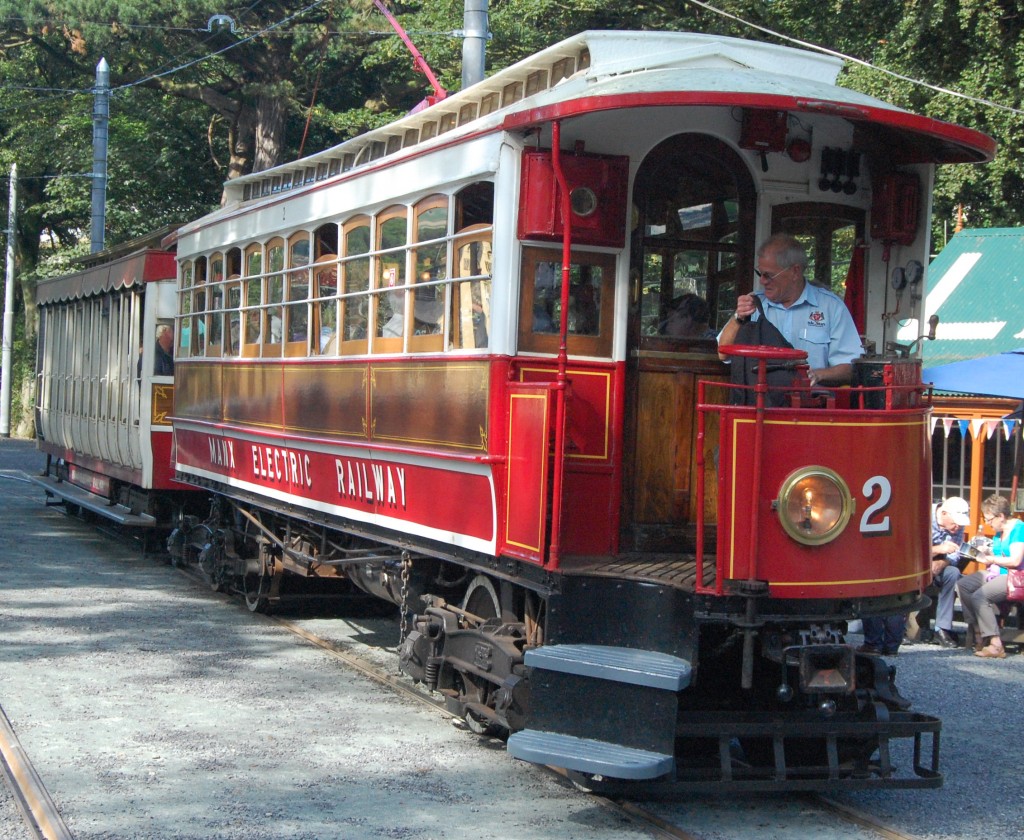 My Manx Heritage (September 9th-15th 2014) tour makes a feature of the Isle of Man’s superb public transport, both the famed heritage rail services and the efficient, extensive bus network.

The tour handbook includes fleet lists of the steam railway, the electric railway and the horse tramway, so that those who don’t habitually take notice of such things can check the age of their vehicle.  Usually, if you’re travelling on steel wheels on steel rails in the Isle of Man, your carriage is at least a century old.

This astonishing collection of transportation is, without exception, indigenous to the island – built elsewhere but designed for Manx service.  Some examples have been restored or rebuilt following years of neglect or accidental damage, yet the mechanics and the operating practices date essentially from the nineteenth century.

The Manx Electric Railway fleet includes the two oldest remaining working electric tramcars in the world still in use on their original route.

Nos 1 and 2 were delivered to the island by the Birkenhead manufacturer, G F Milnes, along with a third, No 3, which was destroyed in a depot fire in 1930, to start the initial 2¼-mile service between Douglas and Groudle in September 1893.

These long, bogie single-deck trams with their open cabs and clerestory roofs suggest American ancestry, for though the Manx line is circuitous and hilly and built to a modest three-foot gauge, it has stronger resemblances to the American interurban railway than to the British street tramway that evolved in the 1890s.

For years these two survivors were relegated to route-maintenance support rather than passenger service but they’re now treasured for their antiquity and they operate regular-timetable services from time to time.

Inevitably, both cars have been modified over the years, but the technology is essentially of the 1890s, and it works as well as it ever did doing the job it was designed for. 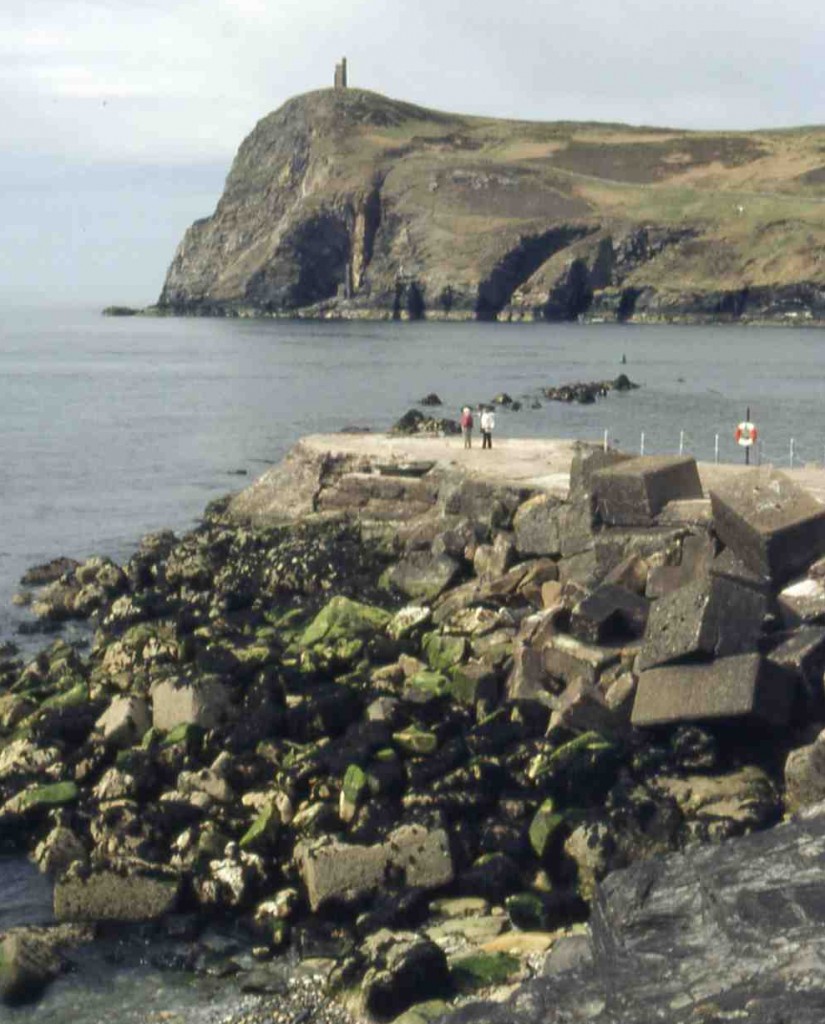 When you leave the Isle of Man Railway steam train at the terminus of Port Erin, a short walk from the station brings you to the most spectacular harbour on the island.

It’s no coincidence that the railway’s southern line terminates here.

Port Erin – in Manx Phurt Chiarn, the “Lord’s port” referring to the British sovereign, the Lord of Mann – was already a modest fishing port before the Manx economy developed with the arrival of steamships in the nineteenth century.

A huge breakwater, constructed with much effort between 1864 and 1876 at a cost of £80,000, was severely damaged by a storm in 1868, and the finished pier was utterly destroyed by a further storm in January 1884, which scattered concrete blocks weighing up to seventeen tons.

While the Port Erin harbour was being built, the railway lines from Douglas south to Port Erin and west to Peel were built.

Construction began in 1872, but the unexpected arrival on the island in June 1873 of the Duke of Sutherland, chief of the railway company’s promoters, a month before official opening date, slowed the progress he had come to inspect.

Track was hurriedly shifted from the Port Erin line to Peel so that locomotive No 1 Sutherland could with appropriate ceremony enter Peel station, where it derailed, leaving the Duke to adjourn to the Creek Inn.  The Peel line opened on July 1st 1873, followed by the Port Erin service on August 1st 1874.

As the terminus of the steam railway line from Douglas from 1874, Port Erin slowly grew from to a small town.

In 1900 the Port Erin Building Estate was laid out by Horrocks & Lomas for Richard Cain of Castletown.  In 1901 the managing company was reorganised and renamed the Athol Park Estate Company (Port Erin) Ltd, but there was little development before 1914.

In the optimistic climate of this period the Isle of Man Railway rebuilt Port Erin station in 1904.

Port Erin became neither the major harbour nor the thriving holiday resort its promoters intended.

Instead, it’s a charming and relaxing destination for Isle of Man holidaymakers.

There are few finer Manx experiences than sitting in the conservatory of the Falcon’s Nest Hotel [http://www.falconsnesthotel.co.uk], gazing out at the remains of the breakwater in the bay, or eating and drinking in the bar of the Bay Hotel [http://www.tripadvisor.co.uk/Restaurant_Review-g616277-d1773319-Reviews-The_Bay_Hotel-Port_Erin_Isle_of_Man.html] on the harbour front.