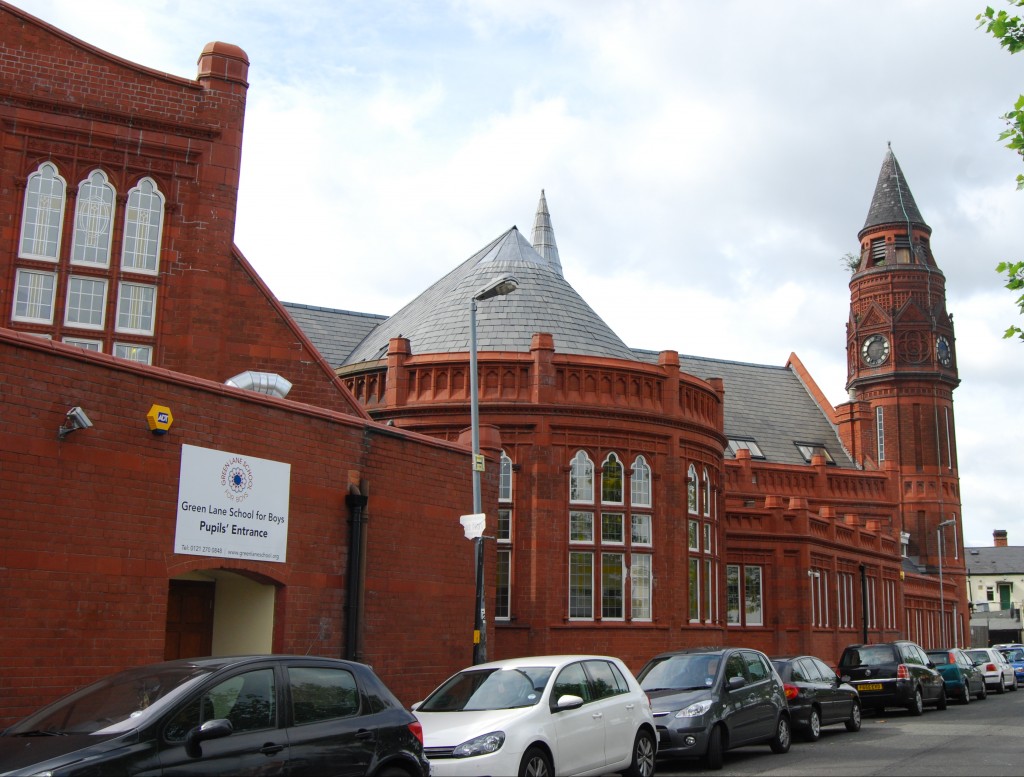 Of all the terracotta public buildings in Birmingham designed by William Martin of Martin & Chamberlain, one of the most dramatic compositions is the Green Lane Library & Baths, Small Heath, with a circular clock-tower at the apex of a sharply triangular site between Green Lane and Little Green Lane.

The library was opened 1894, and after the well was sunk in 1896 the first- and second-class swimming pools and public baths were begun in 1897 and opened 1901.

The building closed in 1977 and was sold for £24,000 two years later for conversion to a mosque and community centre.  The community had previously worshipped in two terraced houses is Alum Rock;  the spacious facilities at Green Lane enabled them to expand to provide worship space with ablution facilities, a mortuary, a reference library and a community hall.

The Green Lane Masjid and Community Centre was completed in 2008, and the Green Lane Independent Boys School opened in 1911:  http://www.greenlanemasjid.org/about-us/history.aspx. 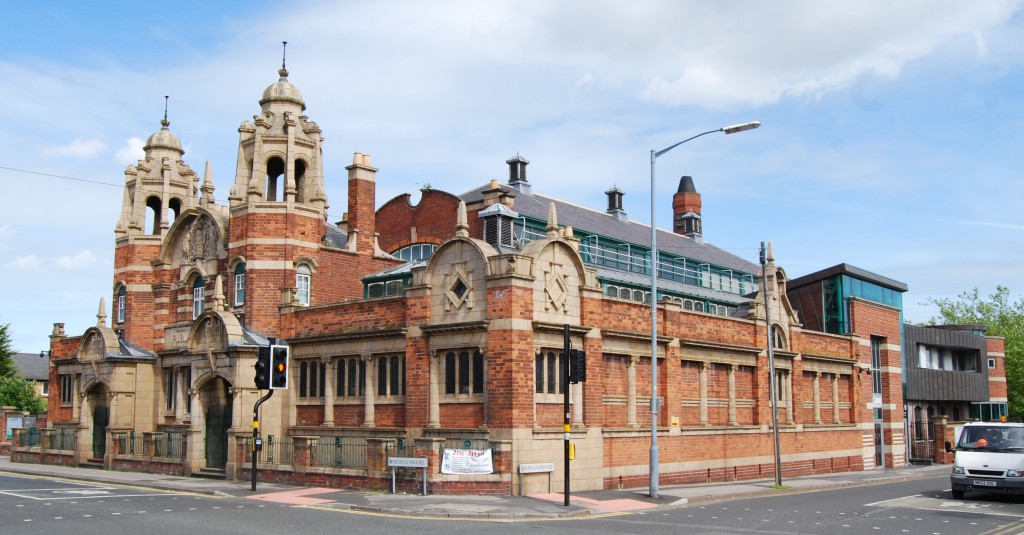 Nechells, on the north-east fringe of central Birmingham, was a gritty place of canals, railway lines and gas-works and power stations, for which the terracotta public buildings of the “Civic Gospel” were much-needed amenities.  Bloomsbury Library had been built in 1892 with a police- and fire-station attached, but no swimming baths.

Baths were vital in working-class districts, not so much as leisure centres but as an indispensable aid to personal hygiene.  Slipper baths were a desirable alternative to the tin bath in front of the fire.

Though the site was purchased in 1903, construction of Arthur Harrison’s design began only in 1908, and the swimming bath and male and female private baths were opened in 1910.

For many years it provided winter assembly facilities when the bath was boarded over.

It closed in 1996 and became badly vandalised.

It was handed over to the Birmingham Foundation (now the Birmingham & Black Country Community Foundation) and with the financial support of Advantage West Midlands, the Heritage Lottery Fund and the European Regional Development Fund it was restored as a multi-purpose community facility providing a crèche and nursery facilities, an internet café, office accommodation for not-for-profit community organisations, a youth club, community bingo and a thriving dance group.

The restoration used recycled demolition materials to provide a new entrance portico with an extension faced in natural copper and a rotunda of masonry, brick and glass. 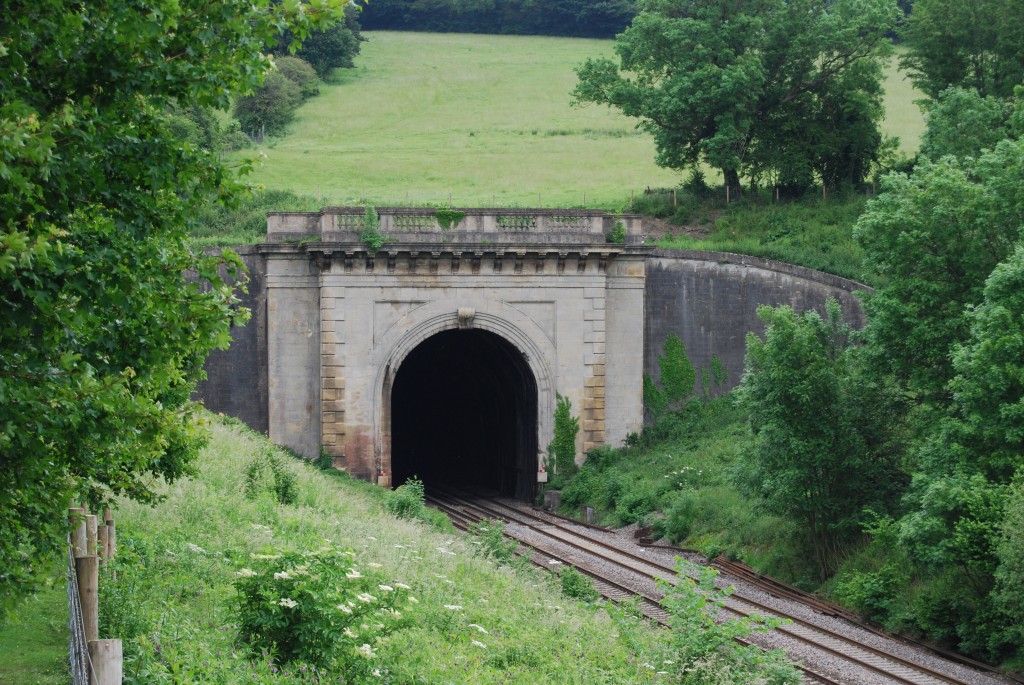 Isambard Kingdom Brunel’s Box Tunnel is celebrated for its engineering significance – and for its entertaining legends.

Driven through the unfriendly Cotswold geology, at the time of construction it was, at 3,212 yards, the longest railway tunnel in the world, though several earlier canal tunnels were longer.

Furthermore, Brunel designed it on a gradient of 1 in 100, descending from east to west.  Contemporary critics warned against “the concussion of the atmosphere and the vibration” arising from trains labouring up the grade, and predicted a downhill runaway would leave the tunnel at a speed of 120mph, a calculation which failed to account for friction and air-resistance:  Brunel’s more realistic computation arrived at a speed of 56mph.

The tunnel was ready for the first train to run from London to Bristol on June 30th 1841.  The west portal, visible from the main road through the village of Box, is an elaborate classical composition.  Its arch is far taller than necessary, and the rock-hewn bore funnels to the conventional loading-gauge within.  The plainer east portal at Corsham lies in a cutting.

One of the enduring stories about Box Tunnel is that Brunel aligned it so that the sunrise would shine through the dead-straight bore on the morning of his birthday, April 9th.  This is within the range of practical possibility, apparently, but difficult in the circumstances to check.

The underground Bath stone quarries which lie under Box Hill to the north of Brunel’s railway tunnel have excited considerable speculation.

Ridge Quarry was used as an ammunition store in the First World War until 1922, and became Central Ammunition Depot Corsham in 1934-6.  It was used by the RAF until 1955 and then by the Army until 1964.

A much larger complex comprising some 2¼ million square feet of storage space, based on the former Eastlays, Monkton Farleigh and Tunnel Quarries, was adapted in the 1930s as a huge subterranean ammunition store, Central Ammunition Depot Monkton Farleigh.

This wartime facility was supplied by a narrow-gauge railway and inclines connected to a GWR siding at Shockerwick, just outside the east portal of the main-line tunnel.

In 1940 the Bristol Aircraft Company’s experimental section moved into Spring Quarry, and the Ministry of Aircraft Production built an underground aircraft-engine production plant to avoid disruption from bomb-attacks on Bristol.  Despite a reputed final cost of £20 million, the facility allegedly took four years to build, operated for eighteen months up to the end of the War and produced 523 out of a wartime total of 100,932 Bristol aircraft engines.

RAF Box, later known as RAF Rudloe Manor, was established above ground and within a subterranean area known as Brown’s Quarry to act as an important regional headquarters during and after the Second World War.

In the Cold War era part of Spring Quarry was used to build the Central Government War Headquarters, a 240-acre alternative seat for national government in the event of nuclear attack or civil disruption.  Capable of accommodating four thousand staff for up to three months, it drew its water-supply from an underground lake and was equipped with generators and temperature-control, the second largest telephone-exchange in Britain and a BBC broadcasting studio.

Peter Laurie’s early study of covert government infrastructure, Beneath the City Streets:  A Private Inquiry into the Nuclear Preoccupations of Government (Allen Lane 1970;  revised Panther 1979), pointed out that trains running through Box Tunnel audibly traversed a junction, which – he speculated – would allow trains, including the Royal Train from Slough, to disappear into the safety of an underground citadel.

The actual evacuation procedure apparently involved concentrating staff at Kensington (Olympia) station and transporting them by rail via North Pole Junction and Westbury to Warminster, from where they would be conveyed by road to Corsham.

The Prime Minister and his immediate entourage would be the last to arrive, by helicopter directly to Corsham.

The headquarters was apparently abandoned in 2004.

A further facility, the Corsham Computer Centre was established in the former Hudswell Quarry in the 1980s, and remains part of the Bristol Bath Total Facilities Management Project:  http://www.indymedia.org.uk/en/2003/11/280247.html.

According to internet sources which may not be up to date, Eastlays Quarry is now a bonded warehouse:  http://www.nettleden.com/venues/eastlays-quarry.   Monkton Farleigh Quarry was sold in 1976 and briefly opened as a museum in 1984:  http://www.theurbanexplorer.co.uk/farleigh-down-tunnel-wiltshire.  Ridge Quarry was resold to the original owners in 1975.

In fact, the most accessible information on this former state secret is to be found on the Government website:  https://www.gov.uk/government/uploads/system/uploads/attachment_data/file/324883/Corsham_Tunnel_version1.pdf. 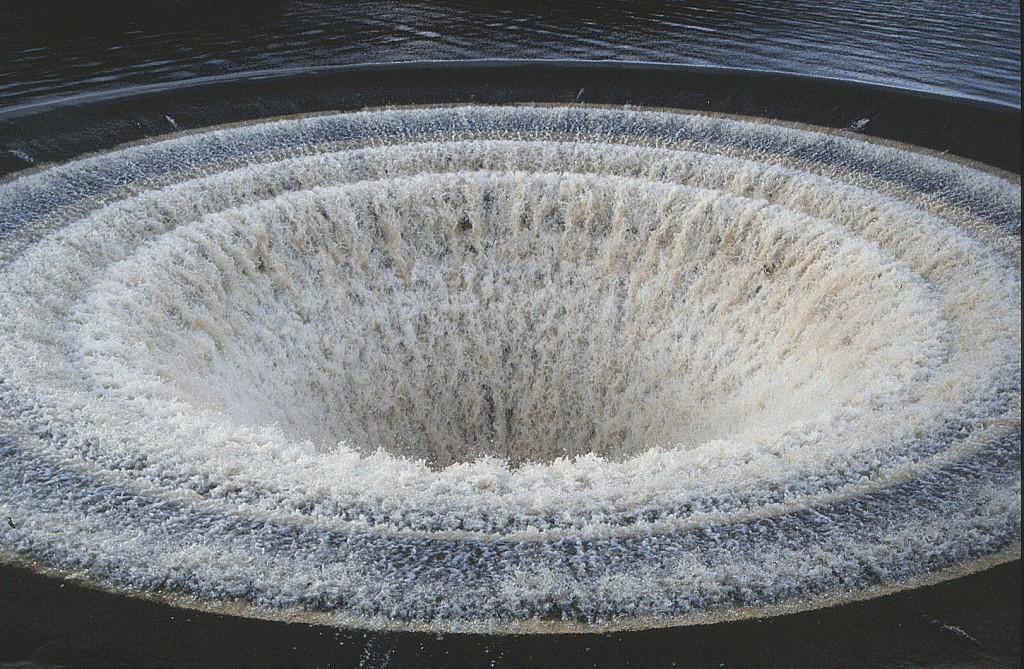 One of the best free shows in the Peak District National Park, in rainy seasons, is the bell-mouth spillway beside the A6013 road that skirts Ladybower Reservoir, the biggest of the three Derbyshire Derwent valley reservoirs.

The original Derwent Valley water scheme of 1899 envisaged six reservoirs but only two of these, Derwent and Howden, were built.

The engineer, Edward Sandeman, pointed out that repositioning the Derwent Dam slightly further upstream would dispense with the need for the top dam, Ronksley. Geological problems in the tributary Ashop valley led to the abandonment of the other three dams, Hagglee, Ashopton and Bamford, which were superseded by a single huge reservoir, contained by a dam at the next available nick-point, Yorkshire Bridge.

This great dam, named Ladybower after a local farm, was begun in 1935.  It drowned two villages, Derwent and Ashopton, and was so badly needed that construction continued without interruption throughout the Second World War.

It was opened by King George VI and Queen Elizabeth on September 25th 1945. Designed by G H Hill & Sons of Manchester, and constructed of earth around a clay core by Richard Baillie & Sons, East Lothian, the dam is 416 yards across.  Its trench and embankment required 100,000 tons of concrete, 1,000,000 tons of earth and 100,000 tons of puddled clay.

Unlike its predecessors at Derwent and Howden, which spill their excess water over the stone sill of the dam, at Ladybower the dam has a clay core and a grassed slope downstream.

The overflow water is directed into two bell-mouth spillways, which from above look for all the world like plugholes, but are actually shaped like ear-trumpets, 80 feet across at the rim, tapering to a 15-foot pipe that emerges at the foot of the embankment.

Ladybower Reservoir  is included in the itinerary of the Cemeteries and Sewerage: the Victorian pursuit of cleanliness (September 17th-21st 2020) tour.  For further details of the tour please click here.