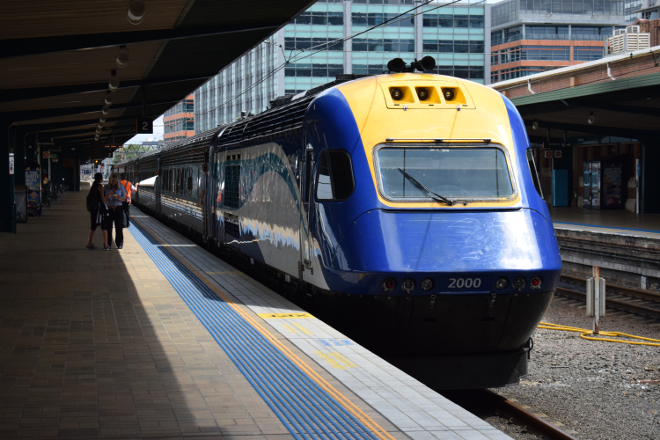 Three times I’ve travelled by train from Melbourne to Sydney – never, as it happens, in the opposite direction.

I wrote up the first journey in a blog article about my introduction to travel in Australia in 2010-11 [http://www.mikehigginbottominterestingtimes.co.uk/?p=851], when I was completely oblivious of the border between the states of Victoria and New South Wales.

The second time, the border was very obvious, because I took the train only as far as Albury, where until 1962 you had to change trains because the two states’ rail systems were built to different gauges:  http://www.mikehigginbottominterestingtimes.co.uk/?p=2245.

By my third trip, early in 2017, I felt I was beginning to find my way around.  I’m used to the fact that the daytime train from Melbourne’s Southern Cross Station doesn’t always leave on time.  Indeed, it often doesn’t arrive until after it’s due to depart.

There’s a good reason for this.

The New South Wales’ Railways XPT trains that operate the inter-state TrainLink service are based on the British High Speed Train.  The sound of the power cars’ Paxman engines is immediately recognisable to British ears.

These Australian workhorses have been in use since 1982, whereas the British version began operating in 1976, and with overhauls and modifications both continue to give sterling service.

The Australian-built version was adapted at the outset for the different conditions down under:  the engines are down-rated and the suspension enhanced to cope with inferior track and longer distances;  the Australian power cars have headlights at roof level to cope with the darkness of the empty rural areas at night.  The trailer cars are completely different from the British Mark III carriages, designed instead under licence from the American Budd company by the Australian builder Comeng.

The astonishing thing about these 35-year-old veterans is the intensity of their schedules.

During this weekly routine each unit is serviced at Sydney only three times.

There isn’t a great deal of leeway, which explains why departures from Southern Cross are often delayed.

Until they are replaced sometime in the next few years, these tough trains earn their keep and represent outstanding value for money.

In the nineteenth century the rivers on which Sheffield is built were polluted, insanitary and smelly.

Both rivers were progressively culverted, tidied away and largely forgotten about.

The original Midland Railway station, platforms 5-8 of the modern station, opened in 1870, and was more or less doubled in size in 1905 when the present concourse and platforms 1-4 were added.

It’s difficult to imagine, while waiting for a train, that beneath the tracks is a spectacular complex of vaults and arches carrying the water from the two rivers northwards under Sheaf Street, where there is a brief open stretch before the watercourse disappears under the Ponds Forge International Sports Centre, next emerging at the confluence of the Sheaf and Don at the end of the oddly-named Blonk Street (named after a scissor-smith, Benjamin Blonk).

This last section was only completed in 1916, after the demolition of the Alexandra Theatre a couple of years earlier.  Part of the theatre building stood on iron columns over the river bed:  http://www.arthurlloyd.co.uk/SheffieldTheatres.htm#alex.  The now-defunct and possibly haunted Alexandra Hotel stands on an adjacent site:  https://sheffield.camra.org.uk/2013/11/alexandra-hotel.

There are plans to remove the 1916 culvert as part of the forthcoming development of the former Castle Market site, and there are informal campaigns urging the opening of other stretches of Sheffield’s buried rivers.

An artful slide-show that suggests the cavernous extent of the area beneath the station (named for reasons which escape me the Megatron) is at https://www.youtube.com/watch?v=7fmsG6svhYo.

There is a spectacular video of waterborne gymnastics at the same location:  https://www.youtube.com/watch?v=XlTcPuSvXQc.

Brighton opened its sewers to public tours half a century ago:  https://www.southernwater.co.uk/brighton-sewer-tours.  Perhaps Sheffield should open its subterranean rivers.

It’s good to see that the Grade I-listed Buxton Crescent is at last undergoing restoration after decades of neglect.

Derbyshire County Council has at last resolved a seemingly intractable conservation problem, only to face a formidable task rescuing a Grade II*-listed country house in the south of the county:  https://www.derbyshire.gov.uk/leisure/countryside/countryside_sites/country_parks/elvaston/elvaston_repairs/default.asp.

Elvaston Castle has a theatrical air.  The architecture of the house is pre-Pugin Gothic, and the garden was once famous for its extravagant, even outlandish design.  The succession of owners, latterly the first eleven Earls of Harrington, have been interestingly varied, attractive characters.

The manor of Elvaston goes back to Domesday, and was purchased in the early sixteenth century by Sir Michael Stanhope of Shelford, Nottinghamshire.  One of his great-grandsons, Philip Stanhope (1584-1656), became First Earl of Chesterfield;  his half-brother John (died 1638) was given the Elvaston estate, and the earliest surviving visible parts of the building, dated 1633, are his.

Lord Chesterfield’s great-grandson, William Stanhope (c1690-1756), created Earl of Harrington and Viscount Petersham, inherited Elvaston, and his grandson Charles, 3rd Earl, (1753-1829) tried to interest Lancelot ‘Capability’ Brown in landscaping the park, but Brown declined, declaring “the place is so flat and there is such a want of capability in it”.

Instead, the Third Earl significantly altered the character of the house.  He commissioned James Wyatt, who had been working nearby at Bretby, to rebuild the south side of the house in Gothic style.  Wyatt died in September 1813, and the work was actually started in 1815 by the much less well-known Robert Walker.

When the south front was completed in 1819 the Earl purchased the so-called Golden Gates (which have actually been painted blue since at least the late 1840s) to embellish the approach to the southern avenue.

The Fourth Earl (1780-1851) had an affair with a Covent Garden actress, Maria Foote, and married her in 1831.  Both were ostracised by what was described as polite society, and they retired to Elvaston, which they embellished as an idyll in which to spend their days together.

The architect L N Cottingham was commissioned to provide a symmetrical Gothic east front to the house, behind the main entrance of which is the sumptuous vaulted entrance hall, with niches and mirrors and ornate gilding and decoration.

The Fourth Earl’s great contribution Elvaston was commissioning the Edinburgh gardener James Barron, to develop the uninviting prospect that Lancelot Brown – and latterly, apparently, Humphrey Repton – had rejected.  Barron’s initial survey led him to realise that constructing a land-drain at a particular depth would completely alter the potential of the site:  his hunch proved correct, and he was able to claim credit for all that followed.

During the 1830s Barron created a series of ornamental gardens where topiary, some of it preposterous to modern eyes, abounded.  He developed a technique of moving conifers in a vertical position within a matter of days:  his success earned him the sobriquet, “the tree-lifter”, and his services were called on by everyone from Prince Albert downwards.

The Fourth Earl chose to keep his pleasure-grounds from the gaze of strangers, though the Duke of Wellington presumably visited, for he declared that Elvaston possessed “the only natural artificial rockwork I have seen”.  Barron’s instructions were – “If the Queen comes, Barron, show her round, but admit no-one else.”

Of his successors, the most colourful was Charles Augustus, 8th Earl (1844-1917), universally known as “Old Whiskers”, a noted huntsman, Master of the South Notts Hunt, whose kennel huntsman was, apparently in all seriousness, called German Shepherd.

The designer of a steam-powered lawnmower with a coffee-pot boiler, he died in 1917 as a result of burns following an explosion in his workshop at Elvaston.

He instructed that on the first fine day after his funeral his hounds were to go hunting:  his wish was carried out, and as soon as they were released the entire pack went straight for the churchyard where they gathered round their dead Master’s newly-dug grave.

Elvaston was little used after the death of the Tenth Earl in 1929.  It was leased as a teacher-training college from the beginning of the Second World War until 1950 and thereafter was simply neglected.  The 11th Earl took up residence in Ireland, and the estate was finally sold to a property developer in 1963.  It was taken over in 1969 by the Derbyshire County Council and Derby City Council jointly and developed as a deservedly popular country park and leisure facility.

Unfortunately, they have made very little of the house.  Its last hurrah was as a location for Ken Russell’s film, Women in Love (1969).

In a county abounding with great country houses, Elvaston Castle has been a Cinderella for far too long.

I’m no fan of Twitter.  My Twitter account @Mike_Hig aims to be the most boring in the world.  I have six followers.  I rely on journalists and others to wade through the twitterings of the twitterati to alert me to the glimpses of sense and wit that intelligent, sensitive people actually broadcast on Twitter.

By this means I was impressed by some of the Twitter comments about the recent fire at Nottingham Midland station.  Several people made appreciative observations about the building, including Lisa Allison @LisaJaneAllison, who wrote, “This makes me sad, it’s really sad to see the damage done to #NottinghamStation because of the fire. It’s such a beautiful building.”

It is indeed a beautiful building, all the more thanks to a comprehensive £150-million refurbishment in 2013-14:  https://www.networkrailmediacentre.co.uk/news/terracotta-decorations-complete-gbp-60m-redevelopment-at-nottingham-station#.

The present Nottingham station of 1904, presenting a grand frontage with a porte-cochère to Carrington Street, replaced an earlier station that fronted Station Street.  It was the Midland Railway’s response to the opening four years earlier of the grand Nottingham Victoria Station which served its competitors the Great Central and Great Northern Railways.

The Carrington Street entrance building, bridging the Midland’s tracks, served to hide the fact that the Great Central’s trains crossed over the platforms of Nottingham Midland on a lengthy viaduct.  Its alignment is now used by Nottingham’s NET trams.

The brick and terracotta façade was the work of the same local architect, Albert Edward Lambert, who had designed Nottingham Victoria.  He collaborated with the Midland Railway house architect, Charles Trubshaw, who had also designed the stations as Bradford Forster Square, Sheffield Midland and Leicester London Road, as well as the Midland Hotel in Manchester.

The architects made full use of the repertoire of Edwardian Baroque – rustication, pediments, Gibbs surrounds – and provided elegant Art Nouveau wrought-iron gates, all intended to outdo Victoria Station across town.  The platform buildings, in the same brick and terracotta, provided public facilities in rich interiors with glazed tiles, coved ceilings and elaborate chimney pieces, some of which survive.

When the lines through Victoria closed in the 1960s, Nottingham Midland became the city’s only railway station.  Remaining services that had used Victoria were shoehorned into Midland’s platforms, and trains between London and the North via Nottingham were forced to reverse, whereas before Beeching there was a direct line via Old Dalby.

The recent restoration is a matter of pride to Nottingham people.  The taxis have been turned out of the porte-cochère, which is now a light, spacious if sometimes draughty concourse leading to the dignified booking hall.  Nottingham station is a place to linger, even if you’re not catching a train.

It’s gratifying that more than one Twitter user thought of the building when they heard of the casualty-free fire.

Friday January 12th 2018 was a hectic day in the centre of Nottingham.  A police crime-scene had cut the tram service at Waverley Street north of the city-centre shortly before the station evacuation blocked tram services to the south and jammed road traffic in all directions.  Then a city-centre power cut blacked out the shops and much of the Nottingham Trent University campus, and caused the Council House clock to chime and strike at the same time, confusing people with a plethora of bongs.

As another delightful Twitter user that day remarked, “Nottingham needs a KitKat this morning…”

The tour Waterways & Railways of the East Midlands (September 3rd-7th 2018) is based in Nottingham.  For further details please click here.