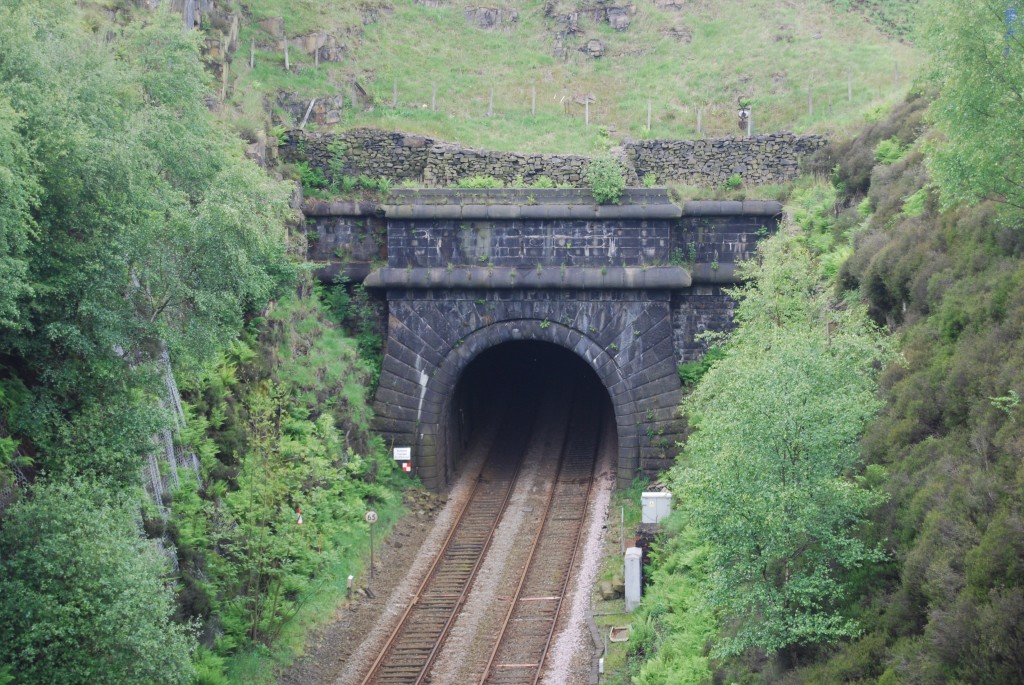 One tunnel-mouth looks very much like another – see Trouble at t’summit, O, brave new world, The Flute, No light at the end of the tunnel, Great Central and Slow boat to Cromford – but the stories are different.

The 2,860-yard Summit Tunnel which takes the Manchester & Leeds Railway through the watershed from the Roch to the Calder valleys was, at the time it opened (1841), the longest railway tunnel in the world.

It was the scene of a particularly spectacular railway accident, even though the derailment took place underground almost exactly a thousand yards from each portal.

On December 20th 1984, a southbound train of petrol tank wagons was derailed by a defective axle-bearing almost at the mid-point of the tunnel.

The three-man crew evacuated to raise the alarm at the nearest telephone outside the south portal.  This meant walking or running along railway sleepers in the dark for something like three-quarters of a mile.

Under fire-service protection, they re-entered the tunnel, where the tankers were already ablaze, and with some difficulty detached the first three wagons which were still on the rails and drew them out of the tunnel.

The remaining ten wagons blazed on, and two of them melted.  Vapour flew up two of the tunnel ventilation shafts at speeds estimated at 110mph, bursting into flames 150 feet high in the open air.

Seventy local people were evacuated as a precaution, but no-one – train-crews, firefighters or members of the public – was injured in any way.  It was a remarkable emergency operation.

The tunnel was too hot to enter until December 27th;  the fire brigades eventually handed it back to British Rail on January 3rd.  Train services through the tunnel resumed on August 19th 1985.

Alongside the bravery and expertise of the fire and police officers at the scene, the sang-froid of the railwaymen is impressive.  They had to unhitch tankers full of petrol from other tankers well ablaze, reversing the diesel locomotive to push back and unhook the couplings.  Then they drove out of the tunnel into the dark night.

The Department of Transport report [http://www.railwaysarchive.co.uk/documents/DoT_Summit1984.pdf] states that later the same night “after inspection this part of the train went forward to its destination”.