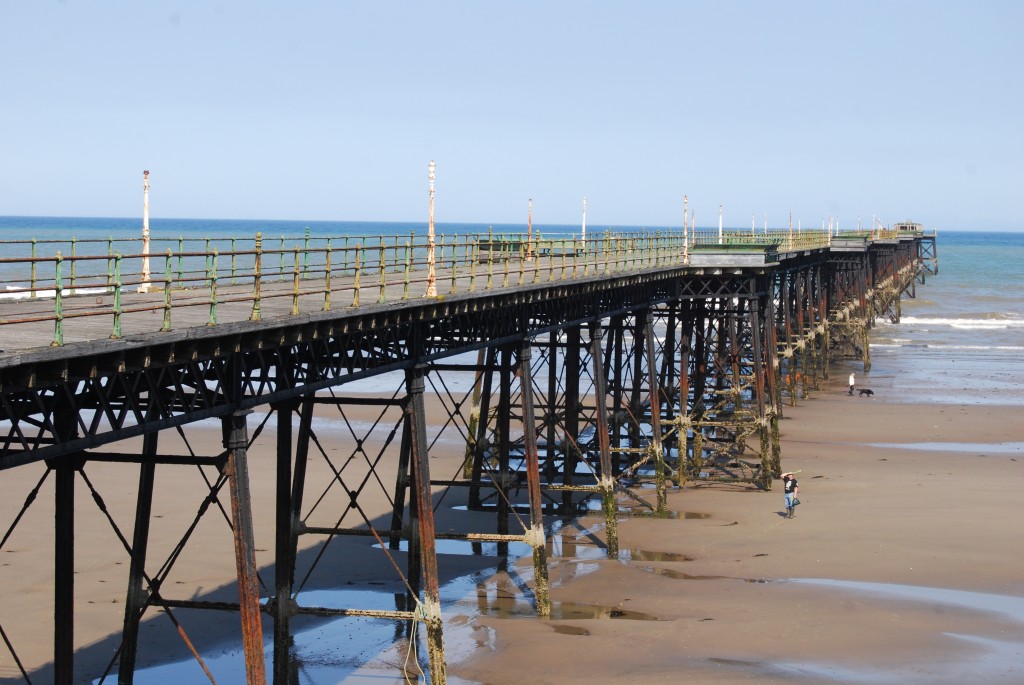 The Isle of Man used to have a thriving holiday industry.  Well into the twentieth century the island was regarded as more exclusive than the Lancashire resorts of Blackpool and Morecambe, not least because it cost more to reach it.

The Manx holiday economy disappeared astonishingly quickly at the end of the 1960s, and the island economy has since been reinvented.  Tourism survives, up to a point, and many visitors to the island bring their motor-bikes.

It’s a pity that one of the grandest mementos of the Manx seaside, the Queen’s Pier at Ramsey, has been steadily neglected for twenty years.

A new landing-stage was added in 1899, and before the First World War the pier brought around 35,000 visitors a year from what Manx people call “across”.

It ranks highly as a historic and engineering monument among the surviving seaside piers of the British Isles, particularly for its unusual cruciform steel piles [www.engineering-timelines.com/scripts/engineeringItem.asp?id=572].  There is a collection of images of the pier at http://www.geograph.org.uk/search.php?i=21927278.

The contractors’ three-foot gauge tramway was kept for a hand-propelled baggage van to load and unload passenger steamers.  In 1937 a small petrol locomotive was introduced, and in 1950 this was supplemented by a passenger railcar.

The steamer service stopped in 1970 and though the tramway continued until 1981, after repeated vandalism the pier closed completely in 1991.

In 1994 Tynwald, the Manx Government, decided to mothball the pier, and in the same year the Friends of Ramsey Queen’s Pier was formed to safeguard and promote the pier as an asset and a national monument.

It’s no accident that on the Friends’ website [http://www.queenspier.org], three quarters of the chronological history is given over to the post-1994 controversies over whether to restore the pier or demolish it.

In 2011, as an indication of positive intent, Tynwald has voted £1,800,000 for minimal maintenance to safeguard the structure for future restoration.

The most romantic evocations of this wasting asset come from the photographer Ray Collister:  http://news.bbc.co.uk/local/isleofman/hi/people_and_places/newsid_8345000/8345154.stm.