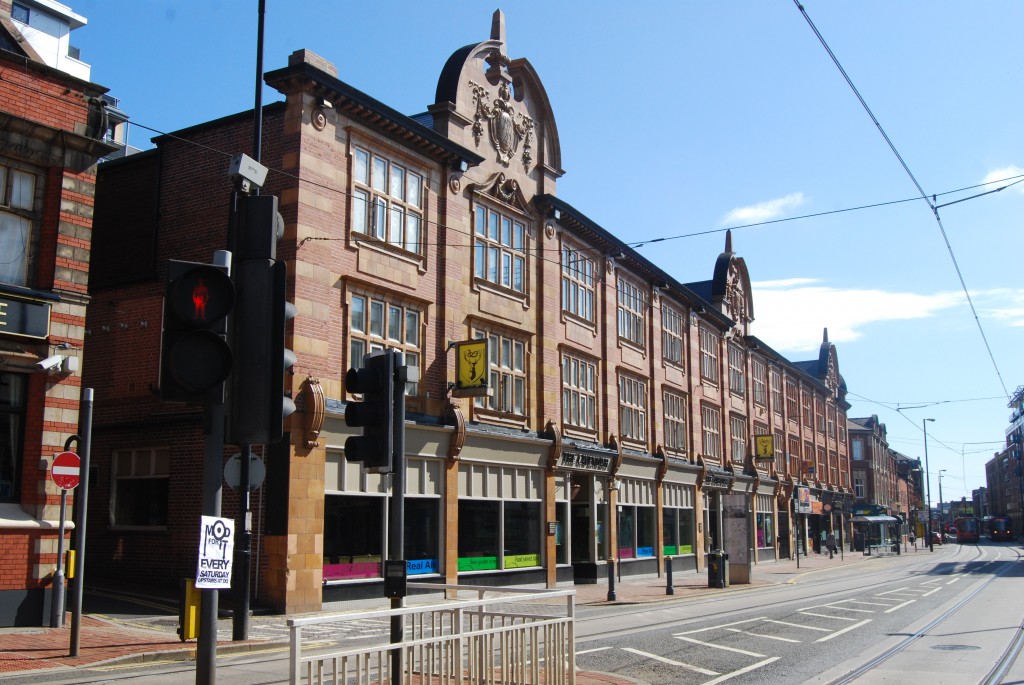 It’s remarkable how much built history is literally invisible.

Among John Minnis’ slides when he talked to the Victorian Society South Yorkshire Group about ‘Early Automobile Architecture’ was one image of my native Sheffield that made me double-take.

John knows Sheffield because he co-authored the Pevsner Architectural Guide on the city.

He pointed out Cavendish Buildings on West Street as an example of an early purpose-built motor-sales and repair shop.  I thought it was a wine-bar, until I remembered that it used to belong to the Kenning Motor Group.  In fact, I once hired a car there.

Cavendish Buildings has a very fine, imposing terra-cotta façade, obviously designed in one piece but actually, by the date-stones on the semi-circular pediments, built in three stages, 1907, 1910 and 1919.

It was built for the Sheffield Motor Company Ltd with, according to Ruth Harman and John Minnis’ guide, showrooms at street level and, on the upper stories, one of those repositories of misspent youth, a billiard hall.

Contributors to the history forum http://www.sheffieldhistory.co.uk/forums/index.php?showtopic=5408 relate that during the Second World War part of the upper level was occupied by the apparently lively Central Labour Working Men’s Club, and later the space was used by the Cavendish Dance Studio.

Until at least the 1970s there was a car hoist within the building, presumably serving repair shops on the first floor.  To passers-by, of course, its original use had long been forgotten.

Now you can eat and drink at the Cavendish:  http://www.screampubs.co.uk/thecavendishsheffield – even if you don’t qualify for student ID.

Future meetings of the Victorian Society South Yorkshire group are advertised at http://www.victoriansociety.org.uk/south-yorkshire/forthcoming-events.  Guests are welcome.  The biscuits are excellent.