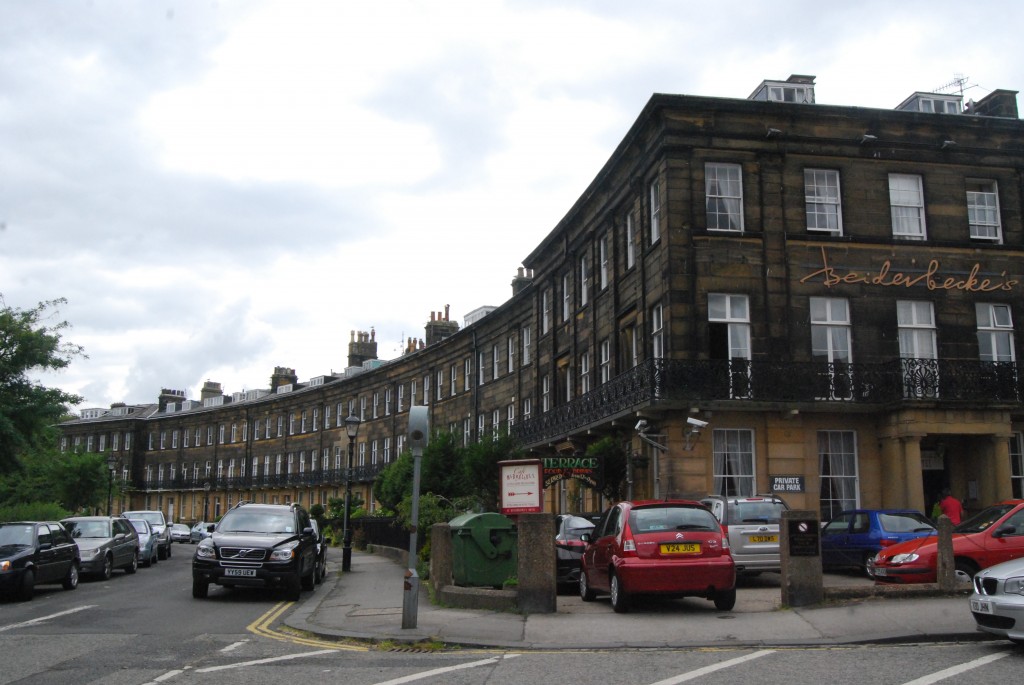 Before the railway came in 1845, Scarborough was entirely an elegant, exclusive resort for visitors who could afford to stay for a substantial season and would require appropriate housing.  The Crescent was begun in 1833, designed by Richard Hey Sharp and Samuel Sharp of York.

This ambitious residential scheme proceeded slowly:  the smaller Belvoir Terrace was complete by 1837, but only four more houses had been built by 1850, and construction was not fully completed until 1857, by which time the arrival of the railway had permanently changed Scarborough’s character.

The Sharps originally envisaged seven villas overlooking the South Cliff:  eventually four were built – Wood End (1835, extended c1902, latterly the Museum of Natural History), Crescent House 1835-6, enlarged 1845-6, later Broxholme, now the Art Gallery), Warwick Villa (1837, later Londesborough Lodge after purchase by the first Lord Londesborough) and East Villa (1830s, later Belvoir House and eventually the White House).  These residences brought style to the locality:  Sir Osbert Sitwell, whose family occupied Wood End from 1862 until 1925, tells of his grandfather, the 1st Earl of Londesborough, taking his visitors from Londesborough Lodge across the bridge to the Spa on foot along nearly a mile of red carpet.

When I’m in Scarborough I like to call at the Art Gallery to revisit the atmospheric moonlight paintings that Atkinson Grimshaw (1836-1893) painted while living at the Castle-by-the-Sea in the late 1870s.  The Gallery has a strong tradition of interesting visiting exhibitions, and excellent coffee, which you serve yourself and then settle up with the welcoming and informative reception staff.  Even if there weren’t many other reasons to visit Scarborough, the Art Gallery would be worth a detour.

For details of the opening-times at Scarborough Art Gallery, see http://www.scarboroughartgallery.co.uk.