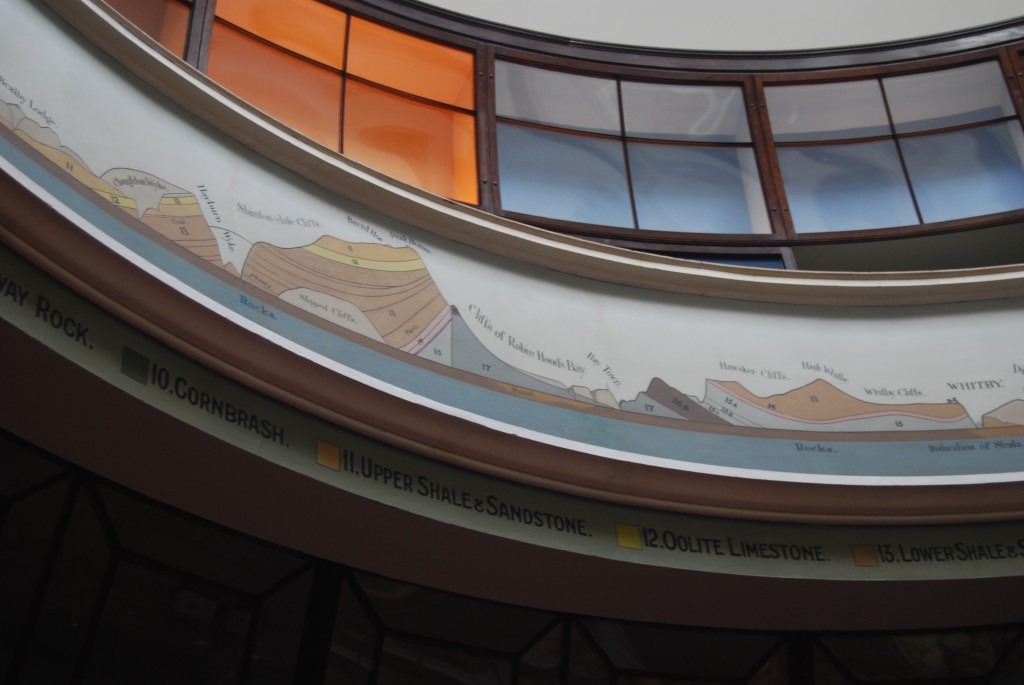 On a plot of land below where the Crescent was later built the Rotunda Museum, designed for the Scarborough Philosophical Society by Richard Hey Sharp in collaboration with the geologist William Smith “the father of English geology”, was opened in 1829.  It was one of the first purpose-built museums in the country, and its shape specifically assisted the display of geological specimens in chronological order.  Sharp’s design provided for lateral wings which were built in the 1860s and extended in 1881.

Other planned but unbuilt embellishments to the Sharps’ scheme included a columned and pedimented Bazaar and Saloon alongside the Rotunda and a monumental column in the middle of the Crescent Gardens.

In 2008 the Rotunda was ambitiously restored and modernised, and now provides a better-than-ever introduction to the geology and local history of the area.  In a relatively small space there is a surprising amount to read and examine.  It’s an excellent place to pass the time when the weather’s unpleasant.

Across the road, you can leave your car at the scene of a particularly crass piece of 1960s municipal vandalism.

Eugenius Birch, the pier-designer, constructed the People’s Palace and Aquarium, which extended underneath Ramshill Road, providing three acres of underground entertainment facilities at a cost of £100,000 in 1875-7.  Conceived by the director of the Brighton Aquarium, it was taken over by Scarborough Corporation in 1921:  it became a wonderful and elaborate amusement arcade, latterly known as Gala Land, and was eventually demolished in 1968.

The site became an underground car-park – and a missed opportunity.  Scarborough is not well-blessed with under-cover entertainment facilities.  Hindsight is easy, but so is myopia.  The Sixties preoccupation with accommodating the private car led to the destruction of an indoor entertainment facility in a prime location, in favour of a car park that could have been cheaply located elsewhere.

Details of opening arrangements and activities at the Rotunda Museum are at http://www.rotundamuseum.co.uk.