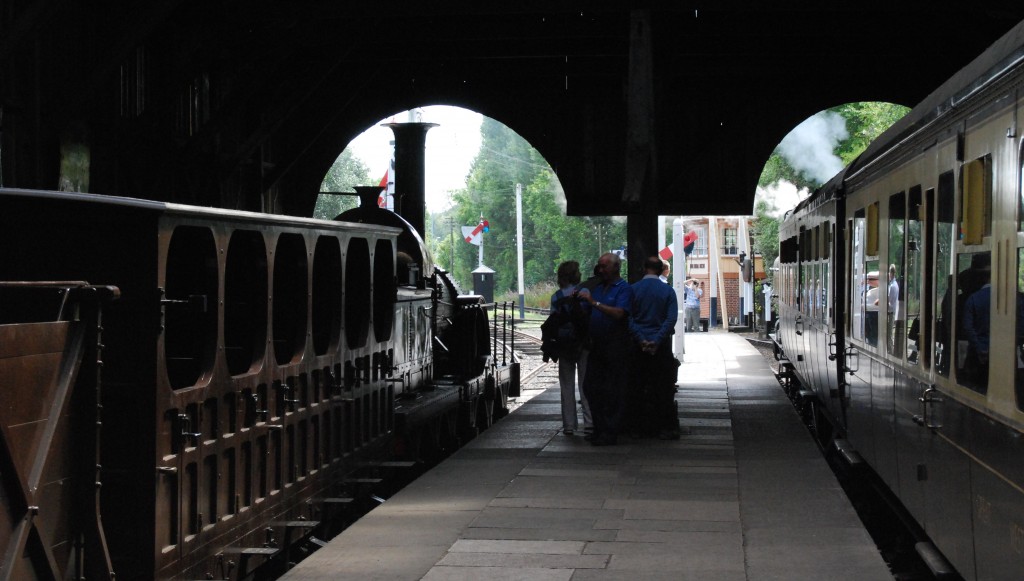 Didcot Railway Centre [http://www.didcotrailwaycentre.org.uk] celebrates the Great Western Railway – known to its aficionados as “God’s Wonderful Railway” and to its weary Victorian customers as the “Great Way Round”.  The Centre is built round the 1932 engine shed, itself a remarkable piece of social and transport history, funded in the midst of the Depression by a National government desperate to reduce unemployment by priming cash-strapped private enterprise.

The engine shed has much of the patina of a working loco depot, with odd nooks and crannies in which engineering wizards deal in steel, brass and oil while brewing strong tea and putting the world to rights.

The GWR Chief Mechanical Engineer at the start of the twentieth century, George Jackson Churchward, developed standardised features in locomotive design so successfully that his signature can be seen in the locomotives of the LMS Railway, those of his pupil Sir William A Stanier, and in the final series of post-war British Railways designs by Stanier’s own pupils.

Immediately recognisable features of Churchward’s designs – tapered boilers, copper-capped chimneys and brass valve-cases – meant that Great Western engines were among the most elegant on British railways.

Didcot proudly shows more than twenty of these magnificent locomotives, and Churchward’s use of standard components means that the Great Western Society can reconstruct long-vanished designs to complete the sequence.  Whereas the LNER A1 locomotive Tornado had to be constructed expensively from scratch, the GWS plans to reproduce a ‘Saint’ from a ‘Hall’, and a ‘County’ from another ‘Hall’ using an LMS boiler.

The Centre astutely makes a virtue of its limitations:  its two short branch-lines offer frequent out-and-back steam-train rides “so there is always something to watch”.  The publicity-material makes the point that all train-rides are in vintage carriages not (as in some Johnny-come-lately steam railways) using late-1960s stock from the age of diesel, and visitors have freedom of movement to explore such features as a working turntable, a reproduction broad-gauge track and train and a surviving example of Brunel’s atmospheric railway track.

For nearly ten years, museum development at Didcot was held back by uncertainties over the lease for the site, until October 2011, when the Centre obtained a further fifty-year lease from Network Rail.

The Centre stands at the apex of a junction between the GWR lines from Paddington to Swindon and Oxford.  That is the point of the place:  it provides the sounds and smells of nineteenth- and early-twentieth century rail travel while twenty-first century trains whizz past on either side.

There’s an echo of this contiguity in Kensal Green Cemetery, where lie both Isambard Kingdom Brunel, who virtually invented the Great Western, and his great friend and rival, Robert Stephenson, son of George, within earshot of trains which still speed on opposite sides of the cemetery from Paddington and from Euston.

The 72-page, A4 handbook for the 2012 Waterways and Railways between Thames and Severn tour, with text, photographs, maps and a reading list, is available for purchase, price £10.00 including postage and packing.  To view sample pages click here.  To order a copy, please click here or, if you prefer, send a cheque, payable to Mike Higginbottom, to 63 Vivian Road, Sheffield, S5 6WJ.