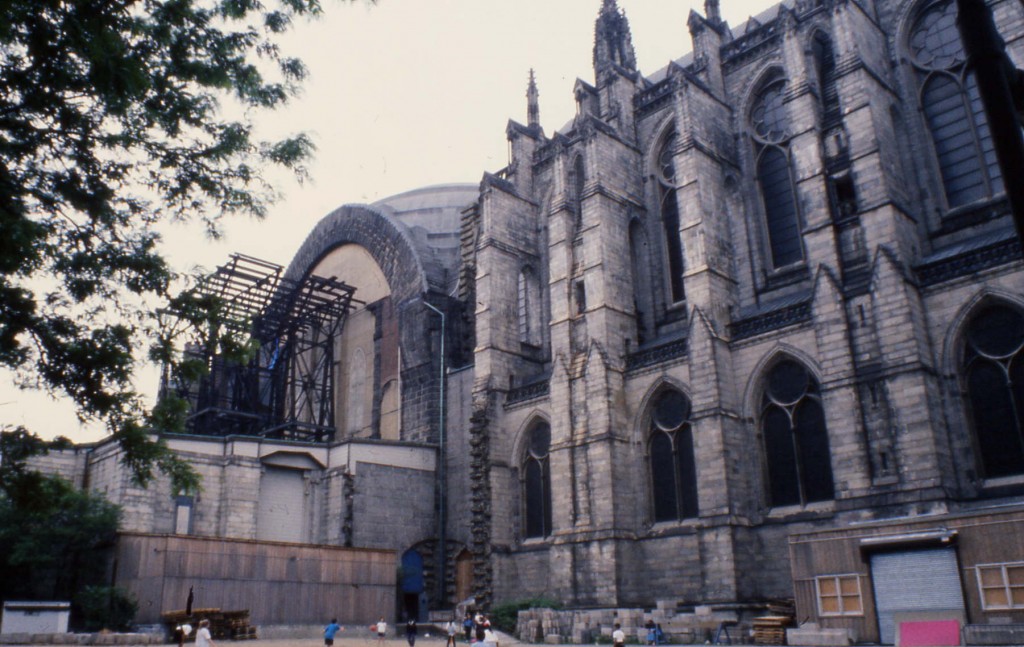 The Cathedral of St John the Divine, New York City, is a game of two halves.  It was begun to the Romanesque/Byzantine style designs of Heins & LaFarge, in 1892, and grew so slowly that the rumour circulated it was being built by an old man and his son.  In fact it was nineteen years before the choir and crossing could be consecrated.

The problem of roofing the vault until the central tower could be built was resolved by inserting a Guastavino tile dome (similar to the Registry Building at Ellis Island and the concourse of Grand Central Terminal) at a cost of $8,500:  this temporary expedient, completed in only fifteen weeks, is still in place.  The Guastavino family were also responsible for the vaulting of the whole church, and of the crypt which supports the nave, crossing and choir floors.

Oddly, the Heins & LaFarge design was summarily abandoned in 1909 in favour of a longer French Gothic plan by Ralph Adams Cram, so that the nave and west front are being continued to the designs of his firm, Cram & Ferguson.  The junction between the two is abrupt, and can never be wholly successful.

By the autumn of 1941 the entire length of the nave was complete.  Construction was stopped when the United States entered World War II, and by the time work resumed in 1982 it proved necessary to import stonemasons from England to apprentice unemployed Harlem youths in the traditional skills.

When it’s finally completed, the Cathedral of St John the Divine, centre of the Episcopal archdiocese of New York, will be the largest (but not the longest) Gothic church in the world – 601 feet long, 320 feet wide across the transepts, with a nave vault 124 feet high.

But it can never be an entirely Gothic church without destroying and rebuilding the whole of the east end.

The Cathedral of St John the Divine website is at http://www.stjohndivine.org.