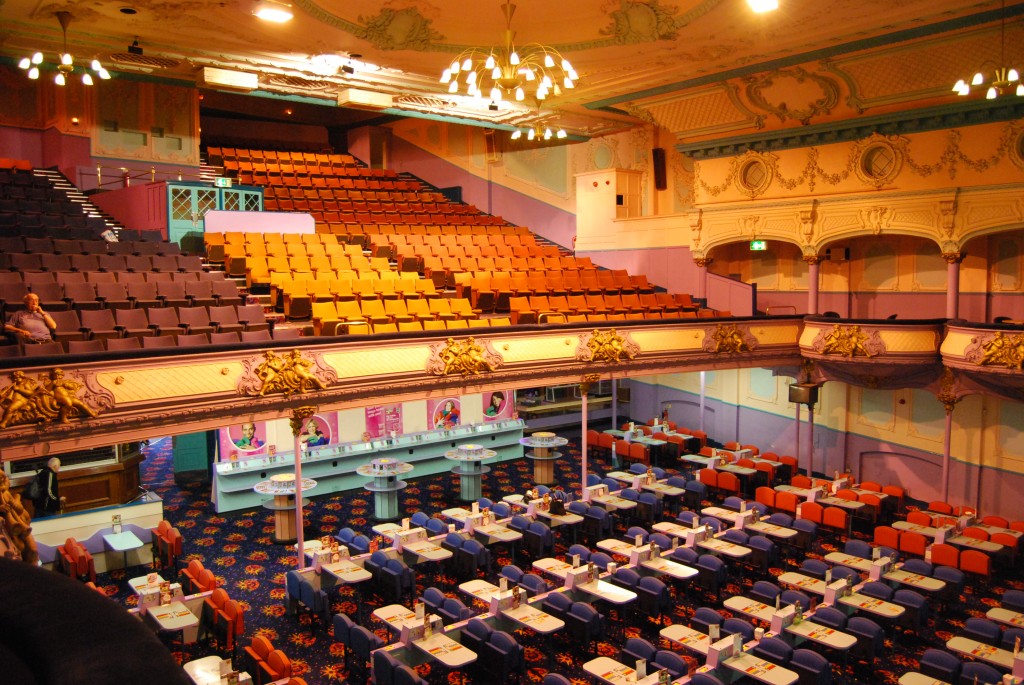 I’m indebted to Ian Hardy, of Great Yarmouth Borough Council, for prompting me to seek out the former Regent Theatre on Regent Street, now Mecca Bingo.

Tracy Utting, the Manager, was very willing to allow my Norfolk’s Seaside Heritage tour-group to visit before the club opened, and her colleague Kerry took great trouble to show us as much as possible of the historic parts of the building.

The Regent has a sophisticated classical façade, with huge Ionic columns and a Diocletian window;  within is an impressive staircase, now altered, the former café with an extensive plaster frieze of putti and garlands, and the auditorium is decorated with rococo plasterwork, with boxes supported by cast-iron columns.

It was built in 1914 for Francis Holmes Cooper, a Wisbech estate-agent who owned a chain of theatres and cinemas across East Anglia, most if not all of them designed, like the Yarmouth Regent, by Francis Burdett Ward.  It closed as a cinema in September 1982, and ever since has operated as a bingo club.

The bingo industry has proved a magnificent custodian for so much of Britain’s entertainment heritage.  From the Blackpool Grand Theatre to the Wakefield Opera House, from the Grade I Tooting Granada Cinema in South London, still operating as a bingo club, to the magnificently restored Stockport Plaza Cinema – any or all of these might not have survived without the proceeds of bingo to keep the building going.

Kerry, as she showed us everywhere from the boxes to the basement (still containing an industrial-sized stove for the café above), remarked that very few people other than club members ever set foot in the building.

Yarmouth people may have forgotten it exists.  If and when the bingo moves on, the Regent will need a new purpose.

It’s too good to lose.

Mecca closed their operation at the Regent “at the end of 2011”.  It reopens as Stars Showbar and Nightclub in April 2014:  http://starsgy.co.uk.