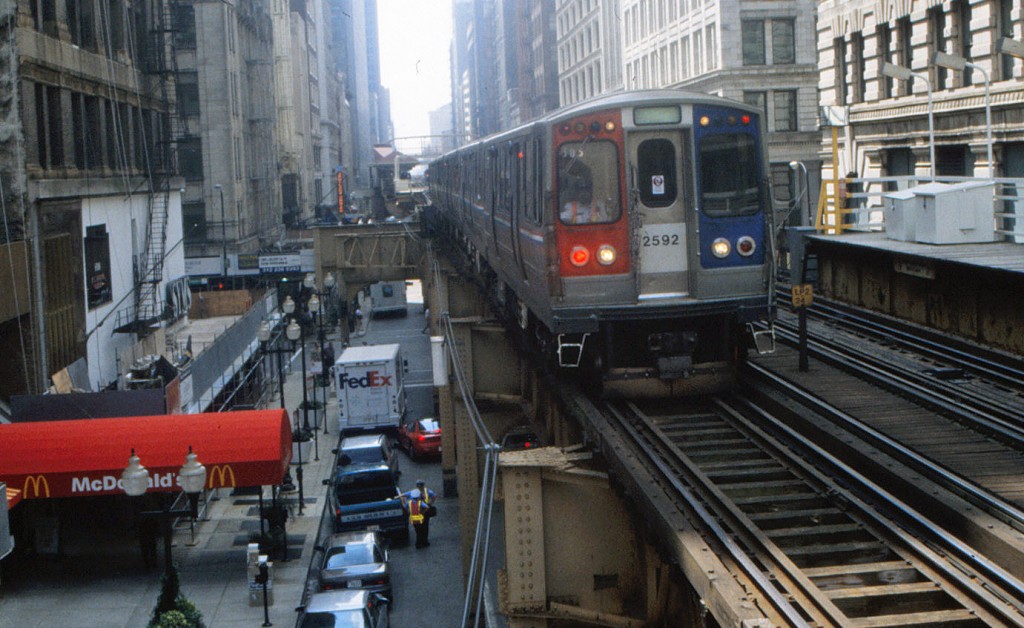 If ever you fly into Chicago’s O’Hare Airport, don’t – as I have done repeatedly – take a cab into town.  It’ll cost you something like forty dollars that you could put to better use.  Catch the Blue Line for $2.25 or less:  http://www.transitchicago.com/riding_cta/airports.aspx.

The Blue Line is one of the newer (1984) sections of Chicago’s celebrated elevated railway, pronounced “El” and formally written as ‘L’.  All of Chicago’s urban railways were elevated above street-level, either on embankments or viaducts, until the construction of two subways which were intended to double as air-raid shelters, the State Street subway (1943) and the Dearborn subway (completed 1951).

The ‘L’ was the creation of a dynamic, unscrupulous, unlikeable tycoon, Charles Tyson Yerkes (1837-1905), who followed up his attempts to gain a monopoly of the city’s streetcars by linking together the elevated railways which until 1897 stopped short of the central area, disgorging thousands of passengers into the congested streets of the financial and retail zones.

Yerkes provided the links, creating a four-sided loop round which all but one of Chicago’s ‘L’ lines gyrate.  Without him, there would be no meaning to the phrases “in the loop” and “out of the loop”.

Everybody knew Yerkes was not an honest man.  He’d been thrown into jail in Philadelphia for misappropriating public funds in 1871:  he served seven months of his 33-month sentence.

He moved to Chicago, with a new wife and a newly minted credibility, and quickly established himself as a financier and investor in streetcars and urban railways.  (Whenever he gained authority to build a line out of town, the out-of-town section generally didn’t get built.)

His methods were unorthodox:  syndicates, honeytraps, blackmail and bribery were his stock in trade.  When they failed he used more subtle deceit, hiding his identity behind proxies.  His self-proclaimed method was to “buy up old junk, fix it up a little, and unload it upon other fellows.”

By fair means and foul, Yerkes imposed on the streets of Chicago the characteristic steel viaducts that to this day blot out the sun and fill the air with the rumbling of electric trains grinding round right-angle bends.

Only once does it seem he was beaten at his own game.  The newly-appointed University of Chicago professor of astronomy, George Ellery Hale, aged twenty-four at the time, manipulated – and embarrassed – him into funding not only the largest telescope in the world up to that time, but also the observatory to contain it, which to this day is known as the Yerkes Observatory [http://astro.uchicago.edu/yerkes].

Eventually, city government and the city’s press combined to defeat his chicanery, and he sold up and left town in 1900.

He eventually ended up in London, where the practical and financial uncertainties that had dogged the planned deep-level tube system looked a fertile area for his type of enterprise.  He bought up existing companies and combined them into the London Underground Electric Railway Company.

He died before the Bakerloo, Northern and Piccadilly railways were fully operational, and the London Underground was directed to success by others.

This disreputable man gave London one of its greatest public assets, and an unmistakable icon. His estate was proved at $4 million – under a million pounds at the time.

There is an account of his career at http://www.chicago-l.org/personnel/figures/yerkes/index.html.

This cab-ride footage gives an idea of the compact scale of the Loop as a Brown Line train proceeds south, east, north and west, before turning north to cross the Chicago River into the Merchandise Mart station:  https://www.youtube.com/watch?v=6oAVx6It5MM.