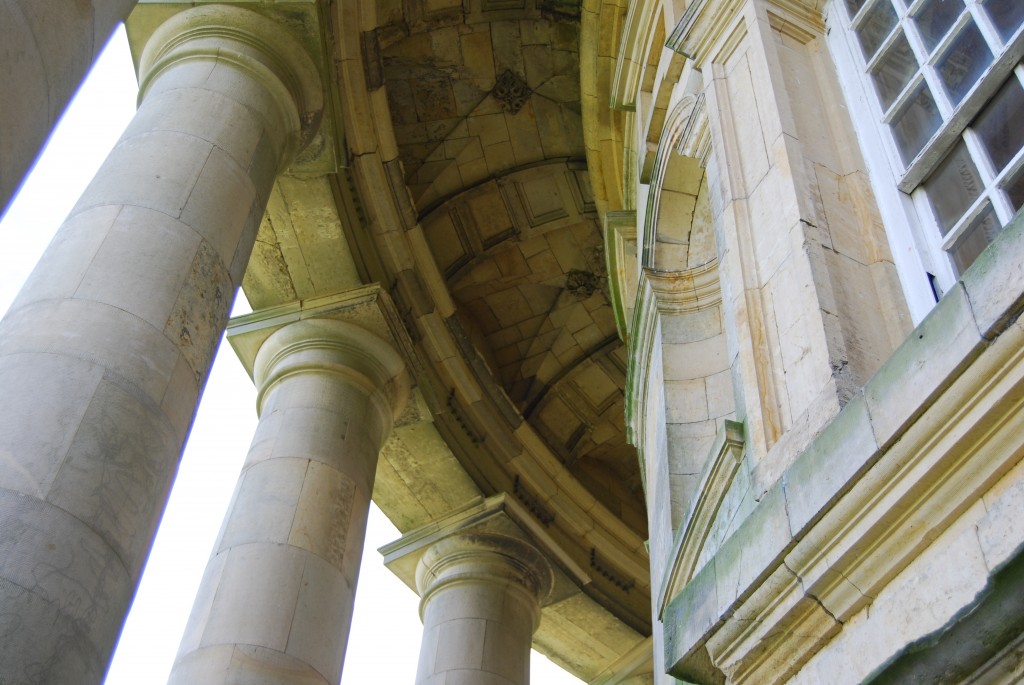 Horace Walpole, a man not easily impressed, was bowled over by Castle Howard:

Nobody had informed me that at one view I should see a palace, a town, a fortified city, temples on high places, woods worthy of being each a metropolis of the Druids, the noblest lawn in the world fenced by half the horizon, and a mausoleum that would tempt one to be buried alive;  in short, I have seen gigantic places before, but never a sublime one.

Charles, 3rd Earl of Carlisle, proclaimed in his inscription on an obelisk near the house that he –

…ERECTED A CASTLE WHERE THE OLD CASTLE OF
HENDERSKELFE STOOD, AND CALL’D IT CASTLE-HOWARD.
HE LIKEWISE MADE THE PLANTATIONS IN THIS PARK
AND ALL THE OUT-WORKS, MONUMENTS AND OTHER
PLANTATIONS BELONGING TO THE SAID SEAT.

Of all these out-works and monuments, the most sublime is undoubtedly the Mausoleum, designed by Nicholas Hawksmoor in 1728-9, begun in 1731, and completed substantially to the original design in 1742, six years after Hawksmoor’s death and four years after Carlisle’s.

This great domed rotunda, seventy-six feet high, its twenty slender Doric columns set deliberately narrowly together, sitting on a bastion of gargantuan proportions, is a noble monument not only to Lord Carlisle, whose remains were finally laid to rest there, but also to its designer, who never saw it.

Members of the Howard family continue to be interred in the Mausoleum, which is off limits to ordinary visitors.

But it is possible to see inside the Mausoleum, and to visit other inaccessible parts of the estate, on pre-booked walking tours which are detailed in the Castle Howard website at http://www.castlehoward.co.uk/Whats-On.html.

The walking isn’t strenuous, though the tour can take up to 2½ hours.  It’s worth every step.

The 40-page, A4 handbook for the 2009 Country Houses of North-East Yorkshire tour, with text, photographs, a chronology and a reading list, is available for purchase, price £7.50 including postage and packing.  To view sample pages click here.  To order a copy, please click here or, if you prefer, send a cheque, payable to Mike Higginbottom, to 63 Vivian Road, Sheffield, S5 6WJ.