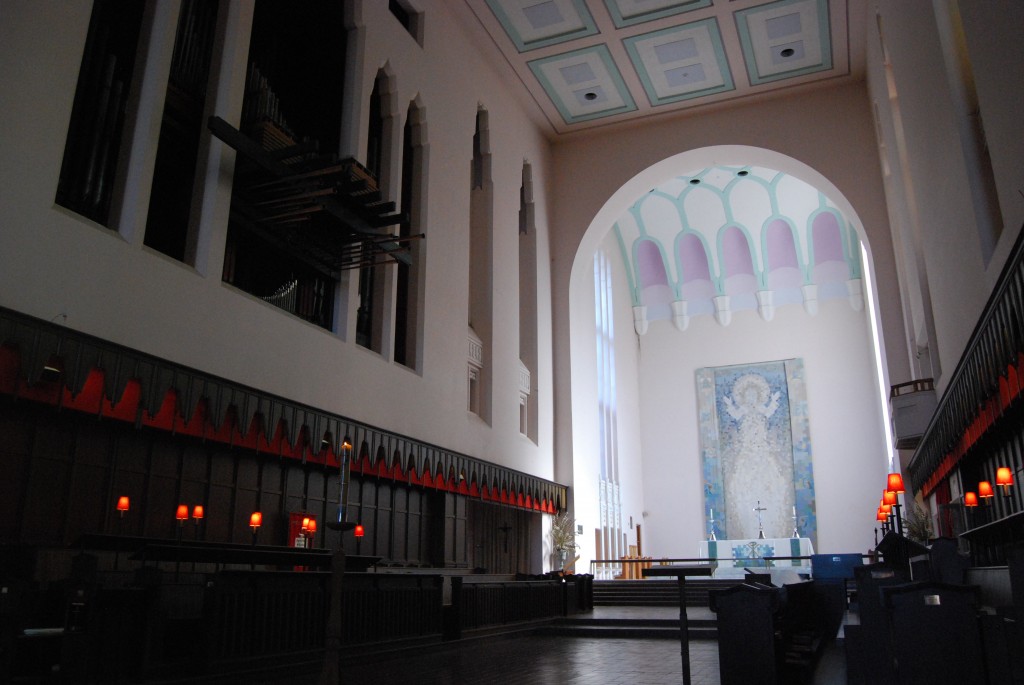 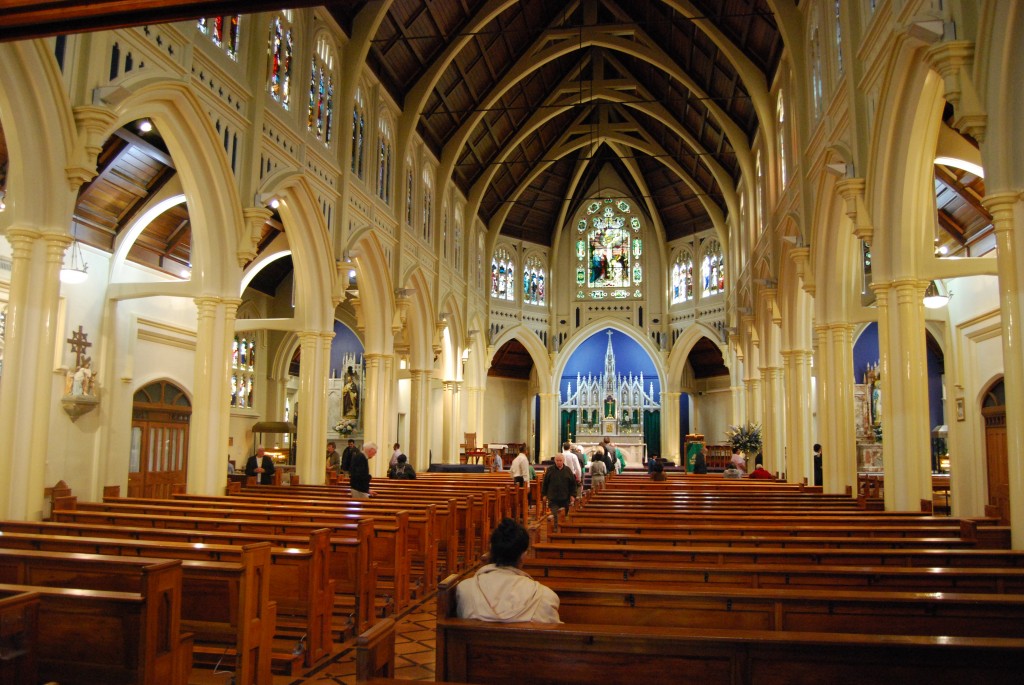 The city of Wellington stands on shaky ground, lying across a major geological fault in an area of constant seismic activity.  When I visited Wellington in February 2011, local people were particularly concerned at the tribulations in Christchurch, a city which had been considered much less vulnerable than their own.

Within a very few years of its first settlement in 1840, two major earthquakes occurred in 1848 and 1855, and as a result all Wellington’s early buildings were built in timber, including what are now called the Old Government Buildings (1875-6), the second-largest wooden building in the world, and the pro-cathedral, Old St Paul’s (1866).

The Anglican diocese of Wellington was about to start the replacement for Old St Paul’s when the Second World War intervened.  Influenced by the effect of the 1931 earthquake in Napier, North Island, the architect Cecil Walter Wood (1878–1947) decided against building a medieval-Gothic building in ferro-concrete and instead used reinforced concrete to create a design that uses Gothic forms, modernised under the influence of Ragnar Östberg’s Stockholm City Hall (1911-23) and the Art Deco movement, and looking towards Sir Edwin Maufe’s Guildford Cathedral (1936-61):  http://www.teara.govt.nz/en/biographies/4w25/1/2.

Cecil Wood never saw even the beginning of his St Paul’s Cathedral.  Queen Elizabeth II laid the foundation stone in 1954, and the first phase was opened ten years later.  The bulk of the nave was added in the second phase, 1970-2.  A historic Lady Chapel, formerly the 1905 timber St Paul’s Church, Paraparaumu, North Island, was added in 1991, and the westernmost bays of the nave, the narthex and the bell-tower were finished in 1998.

Though it was criticised from the start, and modified after his death, Cecil Wood’s design has retained its integrity.

I found it attractive – an architectural essay at the furthest edge of anything you could call Gothic – with a traditional layout, high round arches, subtle use of natural light and quirky arcades that reminded me of details from J R Leathart & W F Granger’s late 1920s cinemas, of which the Odeon, Richmond-on-Thames (1929) survives.

The glass entrance-screen is immediately familiar to British eyes, because the engraved angels are by New Zealand artist John Hutton (1906-1978), who also made the Screen of Saints and Angels for the rebuilt Coventry Cathedral (1962).  [See http://wellingtoncathedral.org.nz/index.php/Cathedral_History.]

The Catholic Cathedral in Wellington is the opposite of Gothic:  the Sacred Heart Cathedral is an uncompromisingly Italianate basilica of 1901, replacing the Gothic St Mary’s, built in 1851 and destroyed by fire in 1898:  http://www.shcathedral.wellington.net.nz/history/index.htm.

However, Wellington has a rare example of modern Gothic, the Catholic Church of St Mary & the Angels, built 1919-22 in ferro-concrete by Frederick de Jersey Clere.  It’s a world away from Cecil Wood’s cathedral, yet hides its modern construction within traditional architectural forms:  http://www.historic.org.nz/TheRegister/RegisterSearch/RegisterResults.aspx?RID=36&m=advanced.