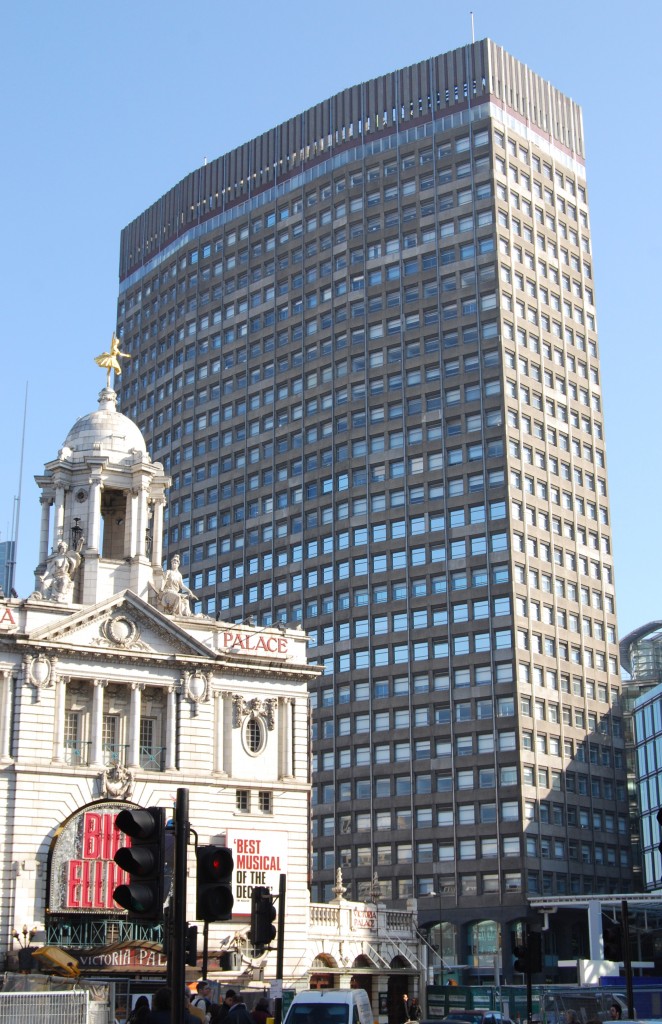 It’s a commonplace that, when walking round a city, we miss so much by not looking up.  We’re conditioned to survey the eye-level streetscape, while just above shop-fascia level there’s a wealth of history and architecture telling us stories.

Some time ago I read around the Pan-Am Building in New York City, and discovered that the design of 1963 Manhattan skyscraper was based on the 1959 Pirelli Tower in Milan, and was related to at least three UK buildings.

Months later I happened to walk out of London’s Victoria Station and found myself staring at the instantly recognisable London sibling of the Pan-Am Building – Portland House, by Howard Fairbairn & Partners (1960-3), built on the site of Watney’s Stag Brewery.

Its height of 334 feet is far lower than the 808 feet of the New York building, yet it towers over the messy streetscape around Victoria.  It was conceived as part of a comprehensive post-war redevelopment that was itself compromised from the outset.

Its tapered footprint is an attempt to reduce its overbearing impact at ground level and give it a degree of elegance.

The website http://postwarbuildings.com/buildings/portland-house points out that it probably wouldn’t get planning permission now, yet it’s far too lucrative a concentration of floorspace to be in any danger of demolition.

In fact it’s been refurbished twice in recent decades, by the T P Bennet Partnership in 1993-5 and by EPR Architects in 2001-6.

I must have walked past it many times without noticing, despite its huge scale.  Now that I recognise it I rather like it, for its own leviathan elegance and for its connection with Manhattan and Milan.